BOSSIER CITY, La. (BVM) — Coushatta, La. is a rural community in the heart of Louisiana cotton country. Born at the height of World War II, Mary Gallagher spent her childhood helping her parents pick cotton as the daughter of a poor sharecropper in North Louisiana. No electricity. No running water. Their meager two-bedroom house sat adjacent to the fields. A skinny blonde girl, the youngest of seven, Gallagher had little to no athletic ability.

She excelled in school and was part of a loving Christian family, but wanted more out of life. So she educated herself, landed a job with the federal government and, in her mid-40s at the insistence of her husband, took up golf. Now, more than three decades later, she’s got a collection of trophies and titles and has built her retirement life around golf.

In the early 1960s after arming herself with a high school diploma and a year in business school, Gallagher headed out to Shreveport-Bossier City, La., home of Barksdale Air Force Base. She met a young G.I. in the United States Air Force and they married, soon starting a family. They were stationed in Turkey and lived in various other stateside locales until returning to the Bossier City area. Now it was Gallagher’s turn for a career, starting as a receptionist with the Federal Aviation Administration and retiring years later as a public affairs specialist with the Air Force at Barksdale AFB.

As is typical in that era, Gallagher had dedicated her personal life to raising her family and supporting her husband. After the kids were grown and gone, her husband, an avid golfer, encouraged Gallagher to learn the game and take up golf. It was tough at first. Her husband tried to be patient as Gallagher hit the links after work and on weekends. Slowly but surely she got better as she spent hours on the driving range, the putting green and the base golf course.

Upon her retirement, she began to golf almost daily. She got a job in the pro shop and joined seasonal golf leagues. The game of golf is no respecter of persons. The skinny blonde girl who grew up picking cotton everyday as a poor sharecropper’s daughter who was now a retired public affairs specialist began to excel at a sport many of her peers had played for decades.

Invitations to tournaments started to trickle in. Gallagher began to win course championships. She loved the sun on her back as she drove and putted the ball. She headed up the ladies’ golf league, was an officer in another and became a mentor to the younger generation through youth summer golf clinics.

She traveled to play tournaments throughout the area. Trophies and titles followed. She even landed a hole-in-one. Gallagher was loving life, outdoors every day but certainly in a different setting from that in which she had grown up, and less than an hour north of those cotton fields where she’d spent her childhood.

“Golf was a God-send for me,” Gallagher said. “The game really opened doors for me that were not open to me as a child. I made lasting friendships and it provided a social network I otherwise wouldn’t have had. I even had the opportunity and the privilege of teaching my grandsons to enjoy the game of golf.”

As she got older, she slowed down just a bit, preferring to play 18 holes driving a cart as opposed to walking the hilly fairways pulling her bag of clubs in the stifling Louisiana heat. But still she plays, and still she wins. Not quite as much, but often enough.

For a young girl with not a lot of athletic ability growing up picking cotton, it was the game of golf that ultimately opened her eyes to the world of sports and, now in her late 70s, Mary Gallagher can reflect back on her humble beginnings as she continues to hit the links. 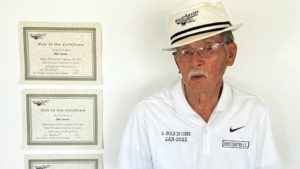 Mike Sonoda’s strokes of luck at 91

Golf. It’s a game that calls for a combination of both luck and skill –…