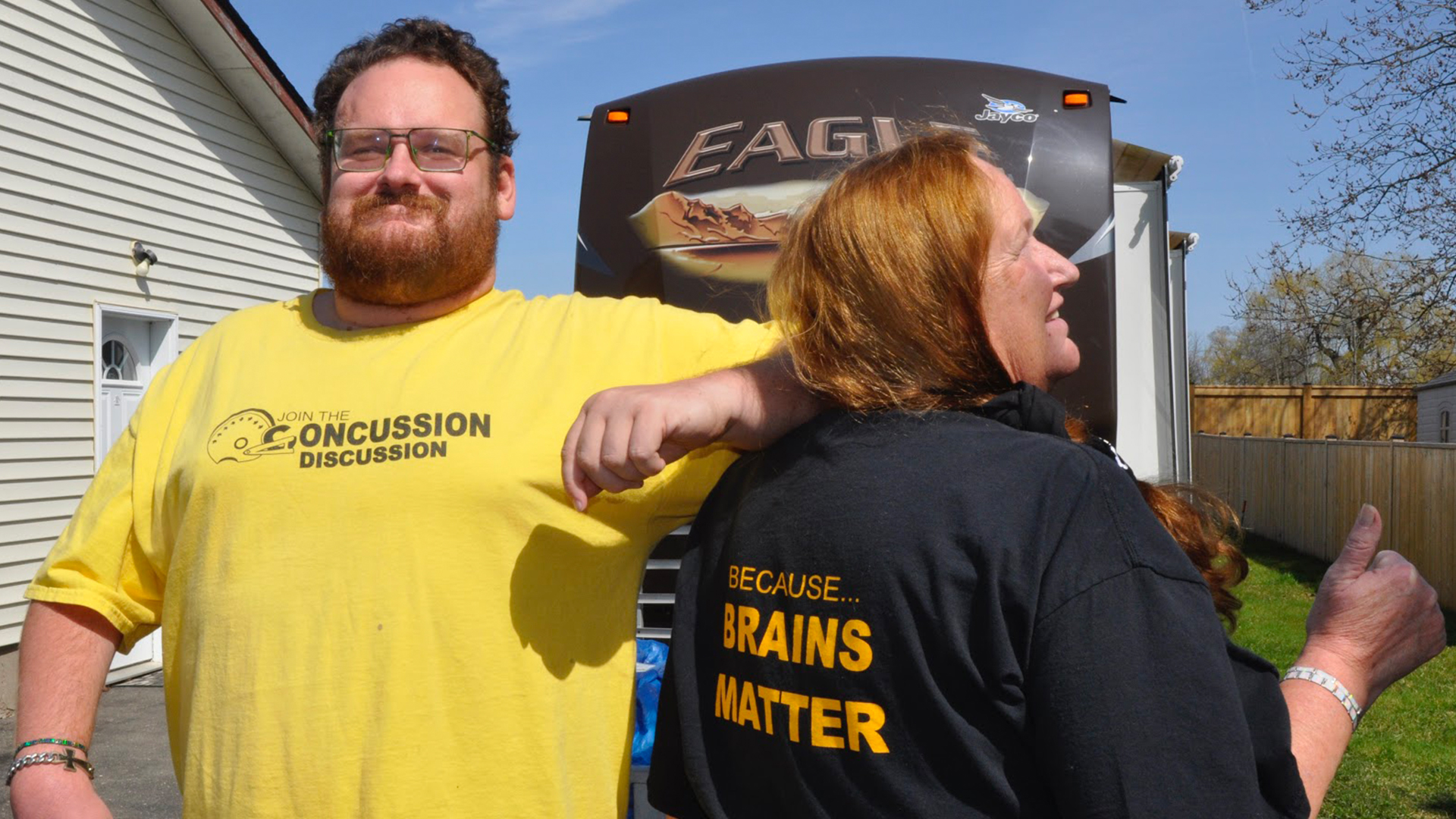 FORT ERIE, Ontario (BVM) – The local bowling alley has long been the backdrop for making memories for countless families across North America.

For Jerod Ogden and his mom, Selina, even the gutter balls are moments to remember. They are also some of the milestones on their 20-year journey with the sport.

Jerod was 14 years old the first time Selina laced up her son’s bowling shoes and began showing him the ropes. It was the first step on another life-changing path for the pair. The two are nearly inseparable, caring for and nurturing each other after both survived an almost-fatal multi-vehicle pileup on the New York State Thruway in Dec. 1988.

They were passengers in a small pickup truck on their way for a Christmas visit with Jerod’s grandmother in Ohio. It was about an hour-and-a-half after leaving their home in Fort Erie, Ont. and crossing the Peace Bridge into Buffalo, N.Y. when they drove into a sudden snowstorm. Driving conditions seemed to worsen by the minute so they decided to take the next exit to wait out the storm.

But as fast as the storm blew up, so did a pileup of vehicles appear out of nowhere just ahead of them. The brakes were suddenly applied, the truck they were in spun and spun on the snow-covered highway, eventually stopping on the shoulder facing the opposite direction. Selina said that before her head could stop spinning, their vehicle was hit head-on by a tractor-trailer. The new model Ford Ranger pickup was crushed with everyone inside.

Jerod was 4 years old, secured in the vehicle’s manufacturer-approved “jumpseat” behind the driver. His head hit the rear window upon impact, and the seat he was in broke apart and fell forward. Paramedics didn’t know he was in the truck when they began Selina’s rescue, but they quickly found the boy unconscious, under the seat on the floor. Jerod was rushed by air ambulance to the former women and children’s hospital, now Sick Kids in Buffalo.

Selina, who had no idea whether Jerod was even breathing, was whisked away by ambulance back to Canada and admitted to a hospital in Niagara Falls, Ont.

When Jerod arrived at the children’s hospital, doctors gave him a five-percent chance of surviving his injuries and no more than 10 days to live. Selina was asked the unthinkable, to donate her son’s organs. Her answer was a flat “no,” steadfast in a gut feeling that her son was going to make it.

Meanwhile, having sustained serious injuries to her left arm and hand, a shattered pelvis, glass and metal embedded in her forehead, and fractures to both feet and left knee Selina couldn’t be at Jerod’s bedside in Buffalo. She instead recorded herself talking to him on cassette tapes. A family friend brought the tapes to Buffalo and nurses played the recordings for Jerod. It would be three weeks before Selina could travel to be with her little boy.

“A big truck hit our little truck,” Selina told her sleeping son on one of the recordings. “You need to rest. You let me know when you want to wake up.”

She was later told that Jerod, who was in a coma for two months, reacted to hearing his mother’s voice, his vital signs fluctuating each time the tape was played.

Jerod surprised the doctors and defied the odds. It was three months before he would be stable enough to leave the hospital. As thankful as Selina felt to have her precious son home, it was a bittersweet beginning to the family’s new way of life.

Selina says her son was a typical, feisty 4-year-old before the crash. It was soon realized that the injuries to his brain permanently damaged his sight and impaired his mobility. He awoke from the coma legally blind and paralyzed on his right side.

But not even a life-altering head injury clouded Jerod’s spirit. Despite having to use a wheelchair and then a walker for mobility, he remained determined and eventually regained the ability to walk. He also transitioned to being left-handed as he was born right-handed. These are just some of the physical and cognitive challenges Jerod overcame as he grew older and bigger.

Like most kids his age, Jerod wanted to play sports. Selina embraced the ideal of organized sports and signed Jerod up for Challengers baseball when he was 7. He also tried golf, but he had difficulty swinging a club with his left arm. Jerod became involved in the Special Olympics when he was 15, first in track and field and then bowling. He travelled to Brandon, Man. in 2006 to compete in the Special Olympics Canada Summer Games.

Twenty years and counting, Selina beams with pride as she looks at the myriad of awards on display throughout their home. When he’s not competing and bringing home medals, Jerod participates and practices as a member of a local 10-pin league.

“I highly recommend bowling to anyone,” said Selina, who enjoys being a coach for the Special Olympics at the regional level.

According to Bowl Canada, about 95 million people all over the world enjoy bowling on some level whether with friends and family, as a participant in a local league or as a serious competitor. While not an overly intensive workout, participants in bowling enjoy many health benefits, both physically and mentally.

Being among Canada’s top 10 Special Olympics bowlers is a crowning achievement for Jerod. Five and 10-pin bowling are recognized at all levels. Athletes can compete in club level matches right up to the Special Olympics International World Games.

Having only one working arm and leg and chronic muscle spasticity hasn’t stopped Jerod from throwing his 12-pound bowling ball. And he does it very well, his best game being 221, just 79 points shy of a perfect, 300 game.

“He’s a big, social butterfly,” Selina said, adding he always has a smile and a kind word for everyone he meets.

Jerod has the kindest soul, especially when he’s competing, Selina adds. At bowling he gives special attention to lane etiquette, a rule in bowling that means never throwing your ball at the same time as the bowler next to you.

“Even if he has the right of way, he always lets the other bowler go first,” Selina said. “It’s Jerod’s nature to put himself out for others and expect nothing in return.”

Jerod loves life, he said he can’t wait to get up every morning, get dressed and face the day.

An avid Hamilton Tiger-Cats fan, Jerod approached his mom three years ago with the idea of traveling to all nine Canadian Football League stadiums. It’s a tall order to fill, but he thought it would be a great opportunity to travel across the country to spread head injury prevention awareness.

“Jerod wants the world to understand what living with a brain injury is like,” Selina said.

So the mother and son team have been taking their message “because all brains matter” on the road during the CFL season. Their goal is to attend as many CFL contests as possible and spend time before each game chatting with fans, no matter the team they cheer for, about their experience with brain injury. It’s dubbed as The Concussion Discussion and can be found on Facebook. As an added touch and for the sake of giving back, Jerod designs t-shirts for the cause and donates all proceeds to the Special Olympics.

Selina is careful to explain to people that her son’s injury is not the result of playing contact sports. But, she points out that taking part in any sporting activity can result in a concussion, a condition caused by rapid, forceful movement of the brain against the skull. It usually occurs with a bump or blow to the head, but it can also occur when the upper body is shaken violently.

Jerod’s desire to help others is ongoing and is a bit of an obsession that he is proud of having. His mom is a big help and organizes the more complex aspects of his quests, but he has gone door-to-door on his own to sell chocolate bars for the Special Olympics. And last spring, after growing his hair out for many months and with the help of friends and family, Jerod raised $972 for the organization by having his head shaved in public at a local community event.

With bowling on the back burner until the season fires up again in October, Jerod is looking forward to heading to Ottawa with his mom in July to see the Redblacks go head-to-head against his beloved Ti-Cats.

Even the most fierce rivalry between football fans doesn’t deter Jerod from getting the word out about head injury prevention.

“I’m going to talk to everybody,” he said.