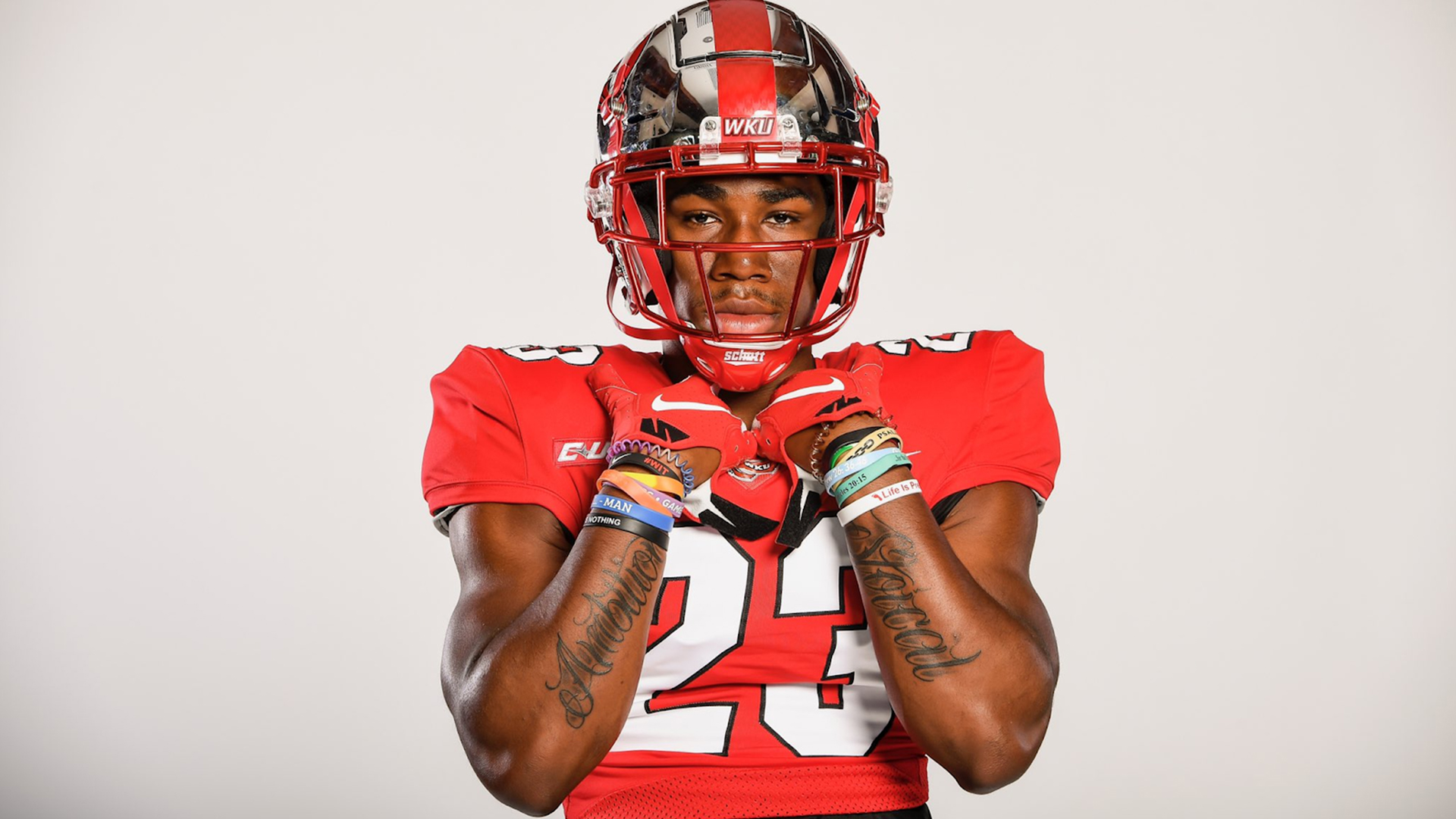 Malachi Corley, a two-star prospect out of Campbellsville High School, will look to bring his big play ability to the Western Kentucky Hilltoppers. Scoring 21 touchdowns his senior season, Corley is known in the state for his ability to put the ball in the end zone. (Photo: WKU Athletics)

CAMPBELLSVILLE, Ky. (BVM) — One thing recent Campbellsville High School graduate Malachi Corley knows how to do is put the ball in the end zone.

Last season, Corley scored 136 of 387 points for the Eagles in just eight games, good for an average of 17 points per game and the No. 7 scoring position in the state. This was in large part to his ability to score from anywhere on the field as he scored 21 touchdowns on the season, 10 rushing, 10 receiving and one on a punt return. Corley’s future school hopes that he can bring the same type of explosiveness with him to the next level.

During a signing ceremony on July 8, Corley, listed as a two-star recruit by both 247Sports and Rivals.com, announced his commitment to Western Kentucky University in Bowling Green, Ky. With the decision, Corley became the first Eagles player to ever sign a National Letter of Intent to play football for Western Kentucky.

The Hilltoppers beat out a number of schools for the athlete’s services, including the University of Louisville, University of South Carolina, Marshall University, Boston College, Western Illinois and Austin Peay among others. Though Corley had been able to accumulate 10 scholarship offers, Western Kentucky was the only one among them to be an FBS school.

It wasn’t easy for Corley to get offers either. Though his skills on the field were clear, coming from a small and under-recruited school, Corley had to do most of his recruitment work himself, composing film cuts and sending emails to coaching staffs around the country to draw interest.

“A lot of schools didn’t know me, (they) didn’t even know how to get to Campbellsville,”  Corley said. “Honestly, I had to do a lot of marketing myself, getting on Twitter, DMing coaches, making sure I posted my highlights after every single game so coaches saw them.”

The Hilltoppers should be happy with their decision. During his senior year, Corley established himself as a force on the football field in all aspects of the game.

Offensively, Corley was a Swiss Army knife for the Eagles, totaling 1,239 yards in eight games, including 698 receiving yards and 541 rushing yards. On the defensive side of the ball, the 5-foot-10, 167-pound Corley could deliver big hits, finishing in the top 25 of the Kentucky High School Athletic Association with four forced fumbles. For his efforts, Corley was named third team all-state by the Louisville Courier Journal and was also named the Kentucky Class 1-A Player of the Year as well as the District 2 Player of the Year by the Kentucky Football Coaches Association.

“Honestly, I wasn’t thinking about it because I’m not a very big award guy,” Corley said. “It was a great feeling. It was kind of a reflection of what I have been through and everything I have done to get to the point where I’m at. It was honestly a great feeling to have all those people know who I am coming from a little school in Campbellsville. It was a big accomplishment to finally put Campbellsville on the map.”

Athleticism should not come as a surprising trait for Corley. He also excelled on the basketball court, playing in 30 games his senior season while averaging 17.5 points, 8.5 rebounds and 4.5 assists. Athleticism also runs in the family as Corley’s older brother, Micah, was also a football player for Campbell and is continuing his football career at nearby Campbellsville University as a defensive lineman.

Western Kentucky always stood out for Corley. Although they enjoyed the things the team could provide him on the field, Corley and his family were impressed by what the Hilltoppers and their staff provided the athlete off of it.

“Me and my family felt it was a great fit for me,” Corley said. “It’s a good school. The new coaching staff has very good values. My mom loves it.”

Although he played all over the field during his time with the Eagles, it seems that Corley will be more of an offensive threat for the Hilltoppers, as he is listed as a wide receiver on the team’s athletics page. Even with only one FBS offer, Corley doesn’t think that will limit his ability to show up on the field. While he has yet to play a game for WKU, Corley wants to make a big impact for the team early in his career.

“As a freshman I want to start and be able to put my name out there with a lot of big time freshmen,” Corley said. “Truth be told, I want to be one of the best players in college football as a freshman. I have people in my corner who believe in me and I know I can achieve that.”

Corley has always been an underdog, from a small school prospect to now an FBS athlete. The Hilltoppers are hoping they have found a diamond in the rough. With his work ethic and effort, Corley will strive to prove the coaching staff right early and often.