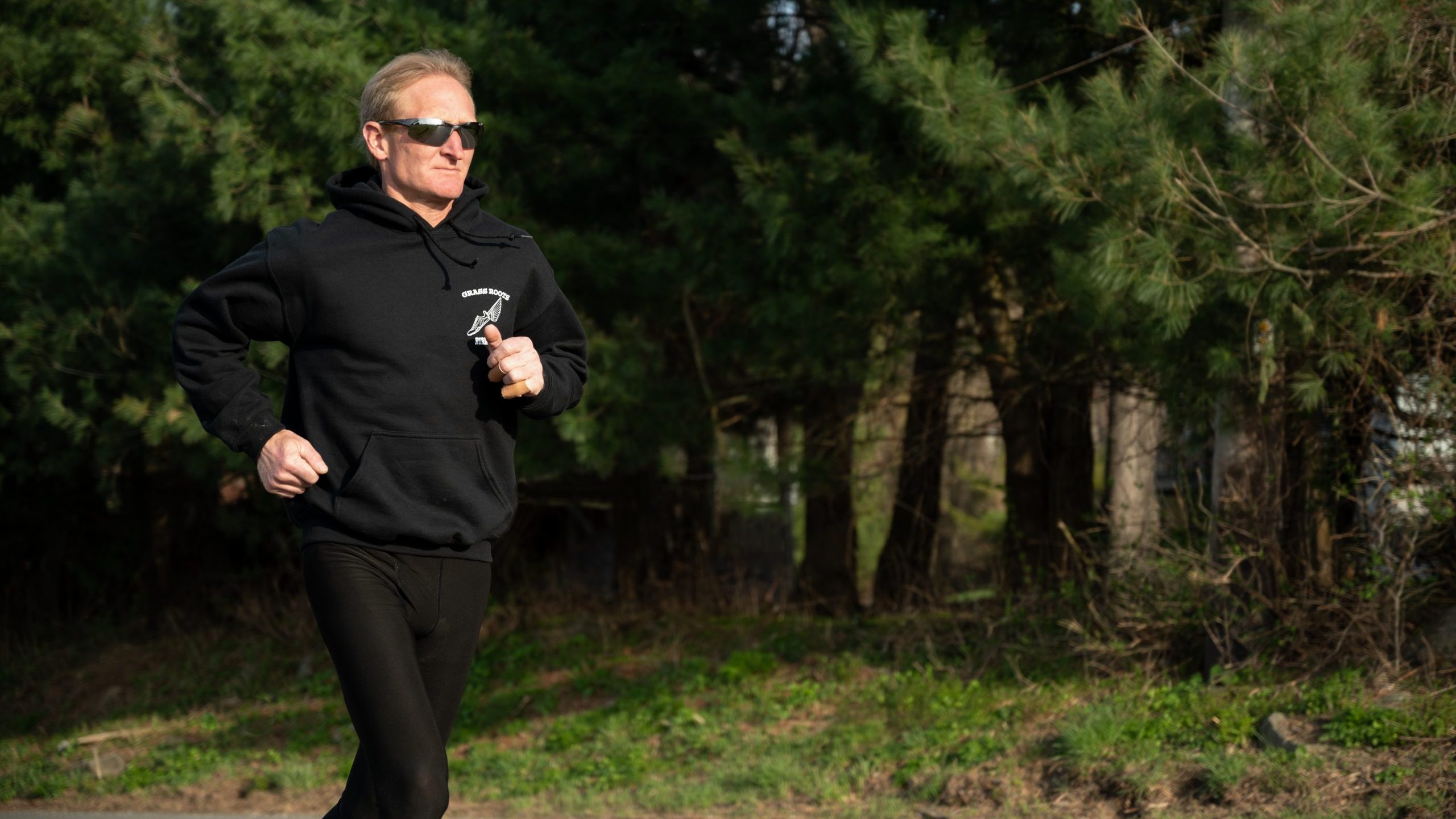 POUGHKEEPSIE, N.Y. — It’s 5 a.m. and Hopewell Junction, N.Y.’s Mike Slinskey is lacing up his sneakers, like he does every morning before heading out into the darkness, no matter the weather. The former professional runner gets in 10-12 miles a day, usually broken into two workouts. He does it for his own health and wellness, but also for his students, mentees and social media followers who now look to the 50-year-old recordholder—currently the nation’s fourth-fastest runner for the 50-54 age group—for motivation. His hope? For each of them to achieve their own personal greatness. “I tell them, ‘Everything I teach you makes you better in every aspect of life, not just in running.”

Growing up, the Hudson Valley area prodigy says his family was not especially athletic but his parents instilled a work ethic that has shaped his life. As a student at Beacon High School, Mike joined the track team but admits he was “nothing special.” However, he loved running and the indescribable “cleansing” feeling it still brings him. After graduating in 1987, at his grandfather’s urging, Mike studied construction at SUNY Delhi. He joined the track team and ended up training with some of “the best kids in the state.” He became more interested in the inner-workings of the human body and often found himself reviewing Gray’s Anatomy instead of his other college textbooks. “I knew running was what I wanted to do, and to go to Colorado, where all the best athletes train.”

So he left Delhi, came home, loaded up his pickup truck and drove west for 32 hours straight, at 20 years old. He found a room to rent for $5 a day, trained and eventually earned his first $50 prize. “I thought I had won a million!”

Soon Mike realized he “was in over his head” in terms of the competition and decided to go home. He began working with a new coach. Mike trained so hard and got so fast in the next 18 months that he ran a marathon in under 2 hours and 20 minutes and qualified for the 1996 U.S. Olympics Marathon Trials. He went to Charlotte, N.C., and trained intensely. “Intensity matters,” he says. “You have to continue to shock your body; that’s how you get better.”

But 12 days before the race, while running on the course, he felt a sharp shooting pain in his calf. “I knew it was bad. The doctor told me I had to wait three months for it to heal, or I could run 10 miles of the race and never run again.”

During the next U.S. Olympic Marathon Trials, in Pittsburgh in 2000, Mike ran with an iliotibial (IT) band injury yet still led in his category for 18 miles in the horrendous heat. “I could barely lift my leg, but it was the best experience of my life!”

His injury soon healed, and Mike was living his dream of running professionally, attending local and national races with sponsors, such as Saucony, PowerBar and Hind Performance. By 2006, he had gone from being “so-so in the area to 15th in the nation,” he says.

While training in the early 2000s, he began coaching high-school students part-time, tweaking their workouts and form. The runners started breaking records, even earning scholarships. He reminds his students: “Not everyone gets a medal. You have to want it. Run faster. Show up to practice. Earn your right to be there.” He also teaches students that “you can do the things you never thought you could,” he says. “Can’t is a forbidden word.”

It was 2013 when Mike’s daughter, Meghan, his only child, asked him to help her and a few cross-country teammates. By implementing his workouts and meeting after practice, the girls started getting faster and stronger. Once they began breaking school records, their coach wanted to meet Mike. The two started coaching together, and Mike began to see students “change physically and mentally,” he remembers. That’s when he decided to give up his job as a bus driver to spend more time coaching. Today, he is Head Coach of the Our Lady of Lourdes High School in Poughkeepsie, N.Y., boys and girls Cross Country and Track and Field teams.

His dedication to his sport and his students is evident in his coaching style. “I don’t just bark orders,” he says. “I run with them and never quit.” He expects consistency and 100 percent effort from his students, even if they’re not feeling 100 percent. “Give me 100 percent of what you have today, and I’ll never ask questions.’”

The cancellation of school has been tough, as the students miss the “team” aspect of training. Mike keeps in touch regularly, sending basic workouts to keep them fit and, more importantly, motivated. “I tell students that, despite the bad in the world, things are pretty good out there,” he says. “If I can help 30 kids, and they help 30 people, it spreads the seeds. Good spreads like grass.”

Allyson Felix of the US wins bronze in the 400 meters, her 10th O...
A star is found: In 200, De Grasse finally gets his gold
McLaughlin outsprints teammate Muhammad for hurdles record
Allman’s Joy: Discus thrower waits out rain for gold medal
One of SC’s best ever, Jamison, will join the Gamecocks a year ...
Hayden Bullock’s discus journey from Bellbrook HS to Air Fo...
Former Cape Henlopen track champion Friend-Uhl still running into...
High hopes for Satellite HS boys and girls track and field after ...
TCU track and field star continues to represent his country
Satellite gets two indoor school records broken during one track ...
Sherman distance: The Tanks are full headed into state indoor fin...
Upper Dublin’s Price-Whitehead striving to break his nation...