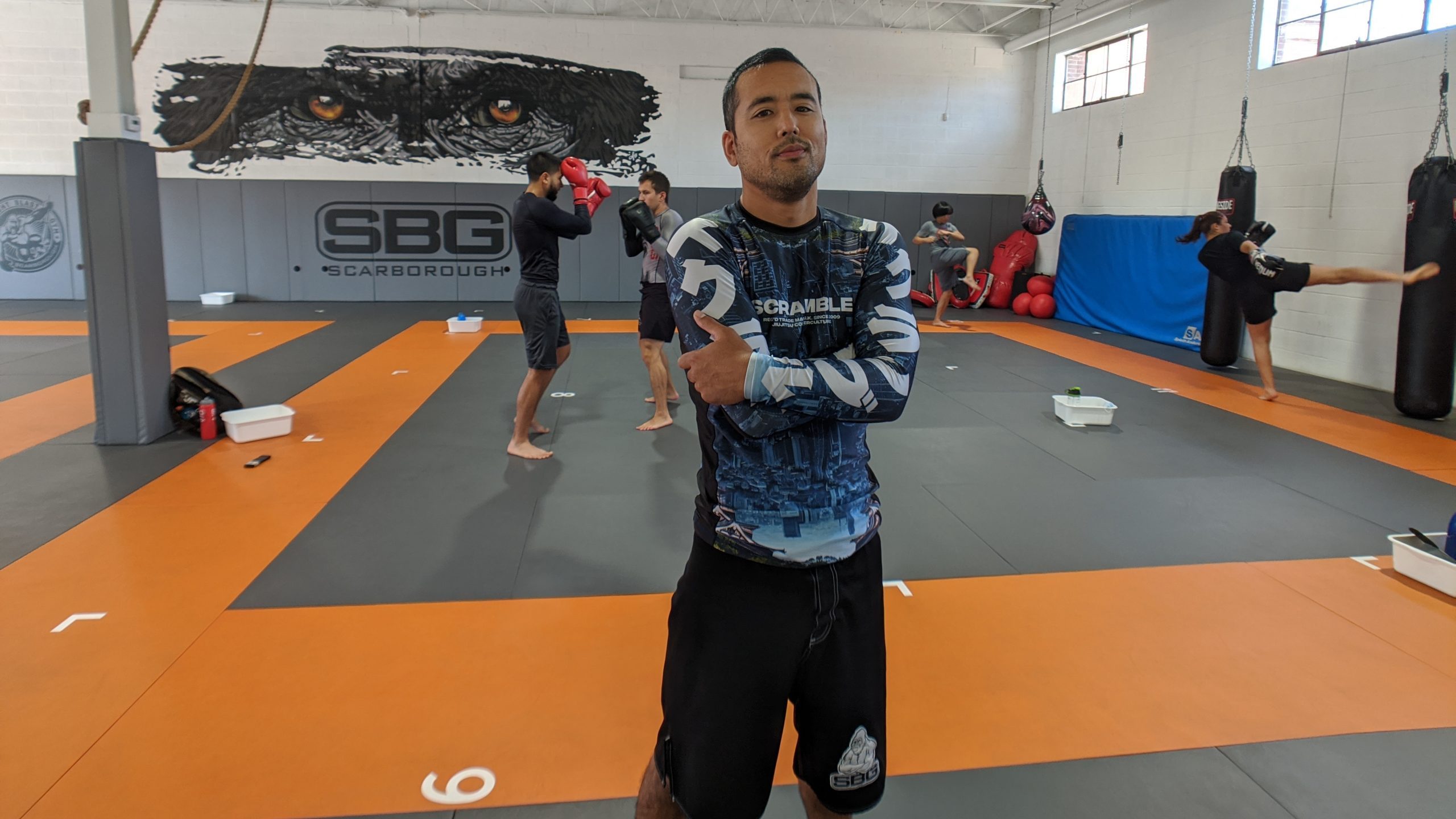 Jun Dazai, founder and head coach at Straight Blast Gym Scarborough, has a goal to evolve martial arts forever and train people at the highest level. While COVID-19 adjusted his plan, Dazai is still working towards his goal. (Courtesy: Jun Dazai)

“Ever since the UFC hit, there’s been more evolution in the last 25 years than there has in the last 2,000 years,” Dazai said.

Dazai got into martial arts around 16 while working in a downtown business called Warrior’s Martial Arts Store. His primary career at the time, however, was mechanical engineering. Martial arts was only a hobby, something done after work. He spent 16 years in a research engineering position at SickKids Hospital while training on the side. Later, Dazai met people who showed him he could convert his hobby into a career that could both spread his passion and support his family.

So Dazai left SickKids Hospital and started SBG Scarborough five years ago. He started in a small warehouse space on Brimley Road and had to expand because of the high demand for his gym. Dazai then got a larger warehouse space in the same building, the same spot SBG currently occupies. Before the COVID-19 shutdown, SBG had over 200 members.

One of the goals of SBG is to further evolve martial arts based upon the principles of Jeet Kune Do, which is both the martial art Dazai started out with and Bruce Lee’s martial art.

“Jeet Kune Do, basically, is based on Bruce Lee’s philosophy of studying different types of martial arts, taking what’s useful from each one, and then developing your own fighting system from it,” Dazai said. “Unlike traditional martial arts, which was handed down move for move, technique to technique, Bruce Lee was sort of the opposite of that. He wanted everyone to study the roots of each martial art, and just take what they wanted from it.”

One of the problems with traditional teaching methods is that while a lot of technique was traditionally taught, people would find that a lot of it doesn’t actually work in a real fight.

“You start to realize what does work, and what doesn’t work,” Dazai said.

If a person is just about form and repetitive movements, they don’t really know what actually works in a real fight where the opponent is trying to punch them in the face. But if they go the hard, extra step and try to apply it against someone trying to resist them, the person enters a process of self-correction.

“You’ll be able to adapt it, age it, and be able to use it with a specific timing where it actually works,” Dazai said.

After the UFC hit, people realized that Bruce Lee was right, style isn’t really that important. What’s truly important is: that kick was a good kick, now incorporate that into your style. Dazai believes in breaking down all the barriers in the traditional martial arts mindset and training whatever the fighter wants, taking things from Brazilian jiu-jitsu, mixed martial arts, Muay Thai, kickboxing, wrestling, etc.

The raison d’être of SBG Scarborough is to help people achieve their goals and train people to the “highest level possible.” There’s a program for kids who are being bullied, a program for women’s self-defense, a program for highly competitive martial arts zealots, and more.

Before shutting down due to the pandemic, the SBG competition team had just begun to really ramp up.

“That’s one thing that takes quite a bit of time to develop,” Dazai said. “In five years, you just start to get into the competition state. And to develop a team of that, you need a group of people that are willing to keep themselves out there and train hard regularly.”

Before the mandatory shutdown order, SBG had many competitions lined up that, unfortunately, were put on hold.

The COVID-19 pandemic had a huge impact on SBG. When COVID-19 hit, SBG shut down the gym even before Ontario ordered the mandatory closure of all non-essential workplaces, which was effective as of March 24. SBG finally reopened on Aug. 4 after being closed for over four months, but a lot of major adjustments had to be made. Many safety protocols were added: tape on the mats show where to stand so everyone is six feet apart, hand sanitizer must be used before entering and people’s temperature must be taken.

Because there can’t be physical contact, SBG is limited to solo training.

“To an extent, we’ve gone back to the more traditional martial arts,” Dazai said. “This is the time when we can work on specific body mechanics and fundamentals on our own.”

SBG started in Salem, Ore., and has grown to over 50 gyms worldwide. It’s recently started to gain more notoriety because some of SBG’s athletes are in the UFC and other high-level MMA competitions. One of the most popular is Conor McGregor.