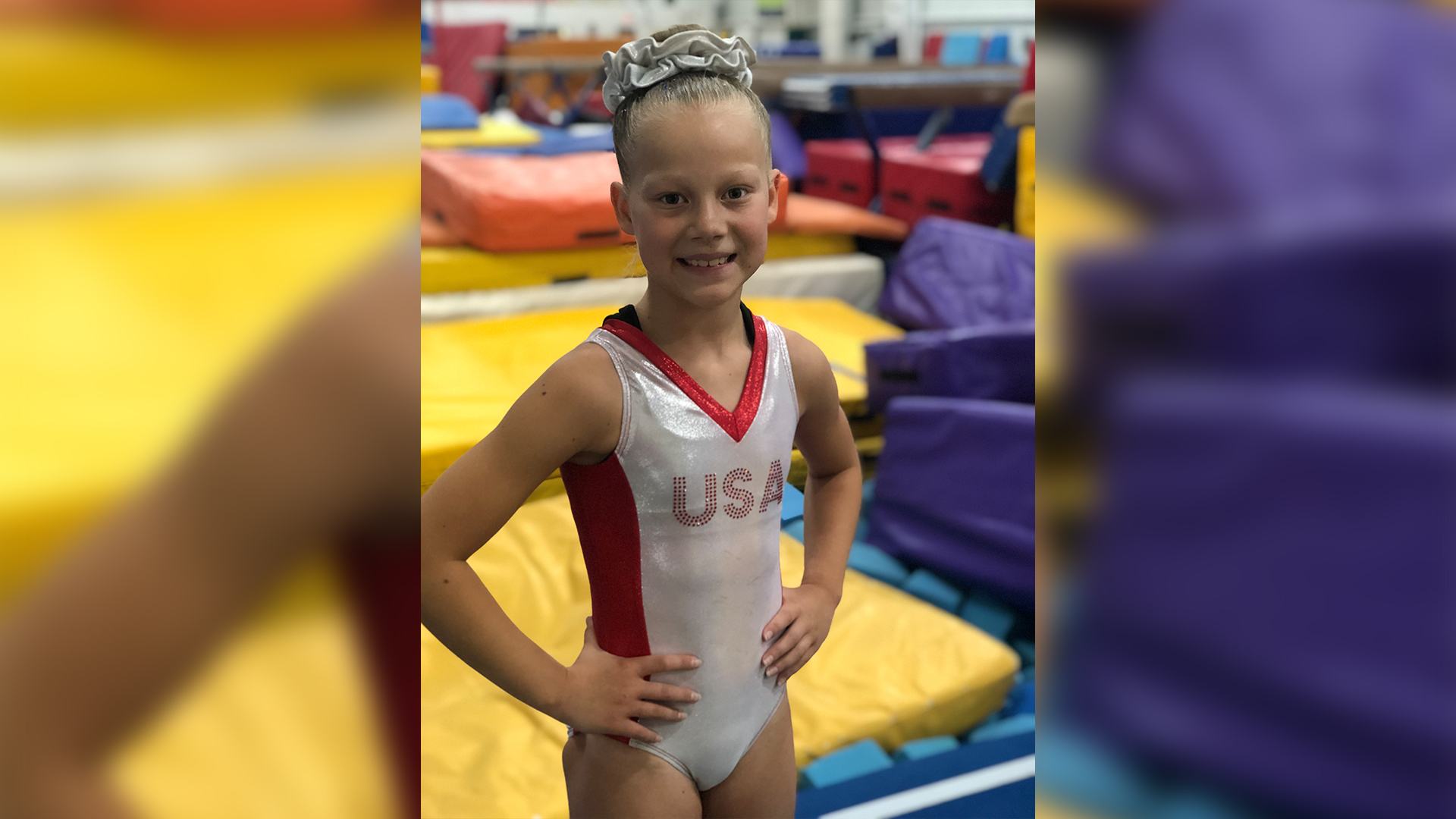 Tessa Brocker, 10, is looking to take her gymnastic skills to the Olympic Games in 2028. While the games are still years away, Brocker works at enhancing her craft at Great American Gymnastics Express in Missouri with an eye on the future. (Photo: Kerri Brocker)

LAKE QUIVIRA, Kan. (BVM) — While most 10-year-old girls have been enjoying a leisurely summer, Tessa Brocker wakes up at 6 a.m. each morning, six days a week, to drive 45 minutes to her gymnastics training facility in Blue Springs, Mo., where she and 29 other girls train at Great American Gymnastics Express (GAGE). Her coaches are known for producing elite gymnasts who are sought after by university coaches nationwide and who often qualify for the U.S. Olympic Team. Brocker hopes to be on the Olympic team in 2028.

Brocker’s gymnastic ability was apparent during her first class at Elite Gymnastics in Lenexa, Kan., at age 4, where her ability to catch on to new skills quickly, listen and stay focused caught the coach’s attention. She made Elite’s competitive team at age 5 and won her first state championship at age 6. At this point, her parents, Kerri and Jonathan Brocker, began thinking about the next steps for her advancement. With GAGE about an hour away and across the state line, they decided to keep Tessa at Elite for an additional year, after which she tried out and made the team at GAGE. She experienced her first gymnastics camp, during which coaches from all over the world arrived with their gymnasts to train and coach for a week. She loved hearing the accents from the other countries and being part of an international gathering.

At age 7, Tessa skipped level 4 to compete at level 5 in 2017-2018 and was Missouri all-around state champion as well as beam and vault state champion. In the summer of 2018 she began working double backs and adding twists to her flips. She was able to climb the rope to the ceiling using only her arms while her legs remained off the rope in a pike position. She gained speed for her upgraded vault, learned giants on the bars as well as the backhand spring on the beam. At the state championship at Lindenwood University in 2019, she was once again the Missouri all-around champion as well as the beam and floor state champion.

In March, the family was on its way to Alabama for a meet when, upon arriving at the airport, they learned the meet had been canceled. They flew home two hours later and within a few days the state of Kansas issued stay-at-home directives due to COVID-19. To maintain her training, Tessa began going on 4½ mile runs four times a week with the goal of reducing her time each run. She also trained for a plank competition, working up to holding a plank for over two hours on the day of the competition. Several weeks later, the gym re-opened and having worked on her strength, flexibility and endurance during the quarantine period, she did not miss a beat and continued to learn new skills each week.

Tessa takes her Olympic goal seriously. She eats clean, eschewing dairy and wheat which “mess with my stomach.” When school is in session her teachers at Ray Marsh Elementary School in Shawnee, Kan., make sure she doesn’t miss much. She’s smart and has been able to complete her homework in the car or upon her return home.

“The Ray Marsh teachers are amazing and really work with her,” Kerri said. “She’s the first student in the Shawnee Mission School District to go through this program.”

Tessa has to make many choices. She would like to join her school’s mathletics team, but it meets during her practice time. She skips skating parties, school carnivals and overnights with friends, but she doesn’t see it as missing out. Tessa chooses gymnastics practice every time and says she has the opportunity to do things that most kids don’t.

An all-around gymnast who is confident on the balance beam, bars, floor and vault, she enjoys the power she puts into tumbling. She admires her coaches, Al Fong and his wife Armine Barutyan, who are known for their artistic style and their passion for training future Olympians. Tessa’s next steps are to compete at levels 8, 9 and 10 and try for Elite status in 2025 and 2026 when she will be 15 and 16. As an Elite gymnast, she would try to qualify for such international competitions as World Championships and the Pan Am Games, with her ultimate goal being to qualify for the U.S. National Competition from which the top gymnasts are named to the U.S. National Team.

Kerri couldn’t be prouder. She and her husband were both college athletes.

“Tessa got every ounce of our athletic ability. She has the right temperament – competitive and determined, and she works hard,” Kerri said. “She is a little grown-up. She is my ‘old soul’ who doesn’t let loose very often but when she does, watch out.  She is a good kid, a good sister and a good friend.”