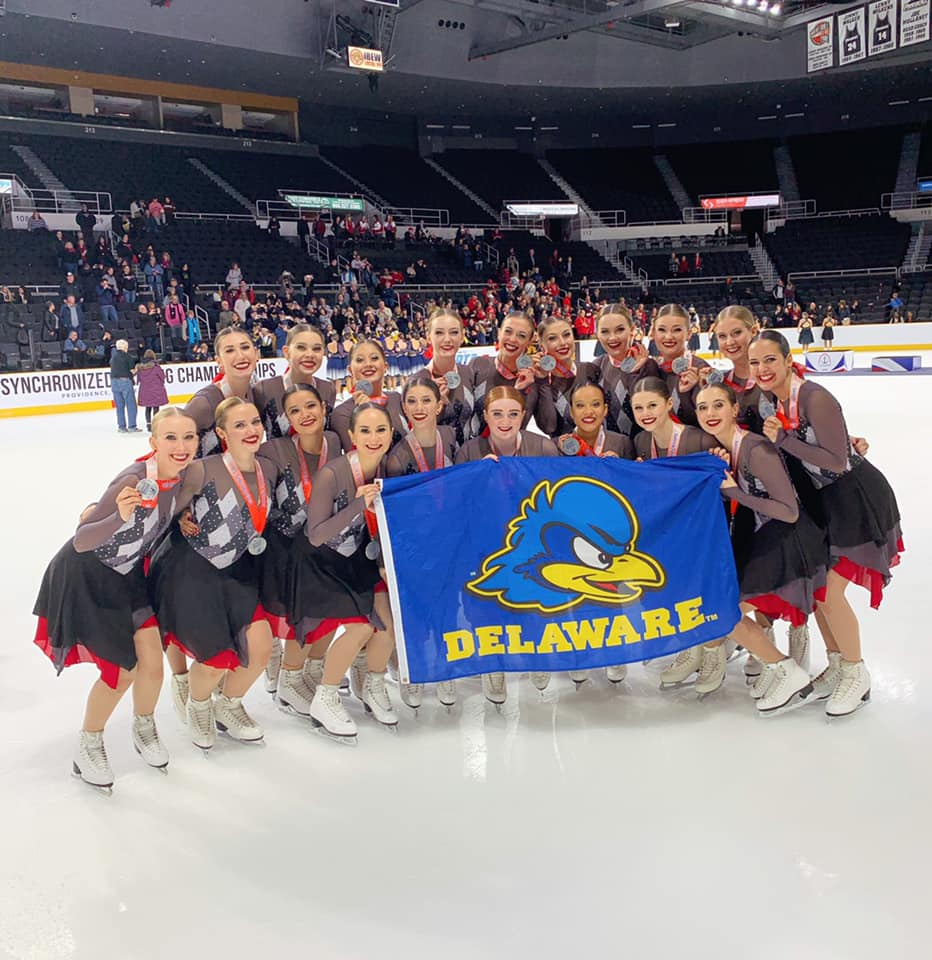 Coming off of a pewter-medal finish in the national championships last year, the University of Delaware synchronized skating team had high hopes for this season. However, COVID-19 has stopped the club team’s ability to practice and perform, but the Blue Hens won’t let that slow their journey back to the podium. (Photo: Megan O’Donnell)

NEWARK, Del. (BVM) — The University of Delaware has a sports dynasty on its hands, though it may not receive the fanfare of more popular sports like football or basketball. The university’s synchronized skating club team does not receive the same amount of attention as some of the other sports on campus, but that hasn’t stopped the team from becoming one of the best in the country.

Blue Hens head coach Megan O’Donnell, who has been with the team since the 2003-04 season, has been able to build a strong unit over the past decade and a half. Over the last 10 years, the UD synchronized skating team has won gold at the Eastern Sectional Championships each year. This year, the victory expanded the Blue Hens’ total Eastern Sectional Championships to 21 in program history.

“It’s been hard, but I think our legacy and our strong alumni base has helped,” O’Donnell said. “I think when kids grow up seeing that and having a name too in the sport definitely helps us.”

On Feb. 29, UD went against eleven of the country’s best synchronized skating teams at the Dunkin’ Donuts Center in Providence, R.I. for the collegiate free skate national championships. The Blue Hens would be one of the last performances of the day, going 8th out of 12, but that didn’t have an effect on the team.

Delaware finished their performance with a score of 80.85 points, good for third at the time. While Adrian College rounded out the performances with a score of 97.35 to jump onto the podium, the Blue Hens would still earn pewter at the event, ending their five-year streak of not winning medals.

“It was really important to us to win a national medal,” O’Donnell said. “That’s been our goal since 2015. … Starting in 2016 we hit such a complete dry spell. We were struggling with numbers. We really focused on taking the skaters we did have and focusing on the basic skating skills to make the program look the best it could be and that definitely paid off this year.”

While winning a medal would be good enough for the program, there are some perks that come with placing. Not only is the team seen as one of the best in the country, which improves prospective athlete interest, but they also are more likely to be invited to national seminars and events by the U.S. Figure Skating for people looking at skating collegiately.

As the team prepared for another run at the national championship, they were given a new challenge due to COVID-19. In July, the University of Delaware announced the suspension of all club sports activities including practices, training and competitions both on and off campus. This put an end to any practice time the synchronized skating team would be able to use to prepare for their upcoming season.

“It has limited us completely and obviously that’s a little scary, but we have to follow the rules for the safety of everyone,” O’Donnell said.

Thankfully, the Blue Hens are not alone in having their skating season taken away from them and there are efforts being made to try and have a full spring season instead of the traditional fall season. While there are still teams that will participate in competitions across the country, O’Donnell said that any national championship wouldn’t be recorded, thus keeping UD still among the country’s best.

“We’ll see,” O’Donnell said. “We don’t know. No decisions have been made. Several teams are in our position, but not all of them. It’s really tough to try to get things going. It’s not good for the sport to have five teams to be able to do everything and have seven teams or whatever not be able to do anything.”

While practices being canceled has been hard enough, O’Donnell believes that the program’s recruiting will also be greatly impacted by the restrictions. Typically, the team will have its Blue Hen Week where it will bring prospective students onto the campus for a full campus tour including time with the team and watching a practice. While the team will have a virtual Blue Hen Week this year, O’Donnell thinks it will pale in comparison to the in-person week that is so critical for her team’s growth and participation.

“We can do that on Zoom, which we will probably do at some point, but it’s not the same,” O’Donnell said. “If you ask our current team right now how many people came to recruitment weekend, 99.9% would raise their hand. Almost every single skater we’ve had has come to our recruitment weekend.”

Fortunately for O’Donnell and the Blue Hens, things have not been completely shut down for individual improvement. Many members of the team participate in weekly workouts over Zoom and some are still able to communicate through text or the team’s Facebook page. O’Donnell continues to coach her younger club teams outside of the university umbrella as they are still able to have practices, although temperature checks, masks and gloves are mandatory. While it is a different type of practice than she is used to coaching, O’Donnell looks to use it to help coach the collegiate team.

“During this age of COVID, everyone is in a different place comfort level-wise and we want to make sure everyone’s safety is our top priority,” O’Donnell said. “On top of that, there are some people who are very nervous to be out and doing things in public and there are others who don’t think twice about it. So whenever you have a team, you always have all of those different kinds of people represented, so we want everyone as a team to feel good about what they’re doing so we try to find a middle ground.”

Having the space for her club practices, O’Donnell also invites members of the college team to work on their skills, although it must be done individually and far from the other groups working. The times have also created difficulties when the coaches are able to work with team members, both collegiate and younger, as precautions have changed all aspects of coaching.

“It’s a lot different,” O’Donnell said. “In terms of coaching, endurance and strength have been a focus of ours over the last couple of years. We push our skaters. We’re very tough on the ice, but we’ve had to be a little more cautious about that because we have skaters with asthma and skaters who have a hard time breathing under the mask.”

Like many of her athletes, O’Donnell is eager for the time the Blue Hens can return to the ice in an official capacity, but she understands that health and safety are first and foremost. A successful season would not even need a competition in O’Donnell’s eyes, but rather being able to practice and be healthy as it would create a sense of normalcy.

“We told our skaters when we step on the ice we want them to be as normal as possible,” O’Donnell said. “We recognize there’s a virus going around. We know that this is serious. We want you guys to be safe; that’s our number one priority. But when we step on the ice, we’re trying to bring something normal. We’re trying to coach and keep it as normal as possible, but obviously it can only be so normal.”

It remains to be seen when the UD synchronized skating team will return to the ice in a competition. When the Blue Hens do return, it is expected that they will pick up where they left off. With over 10 years of winning the Eastern Sectional Championships, they will expect nothing less this season. Although they are happy with their medal placement from March, they want it to be only a stepping stone for their goal of a national title.