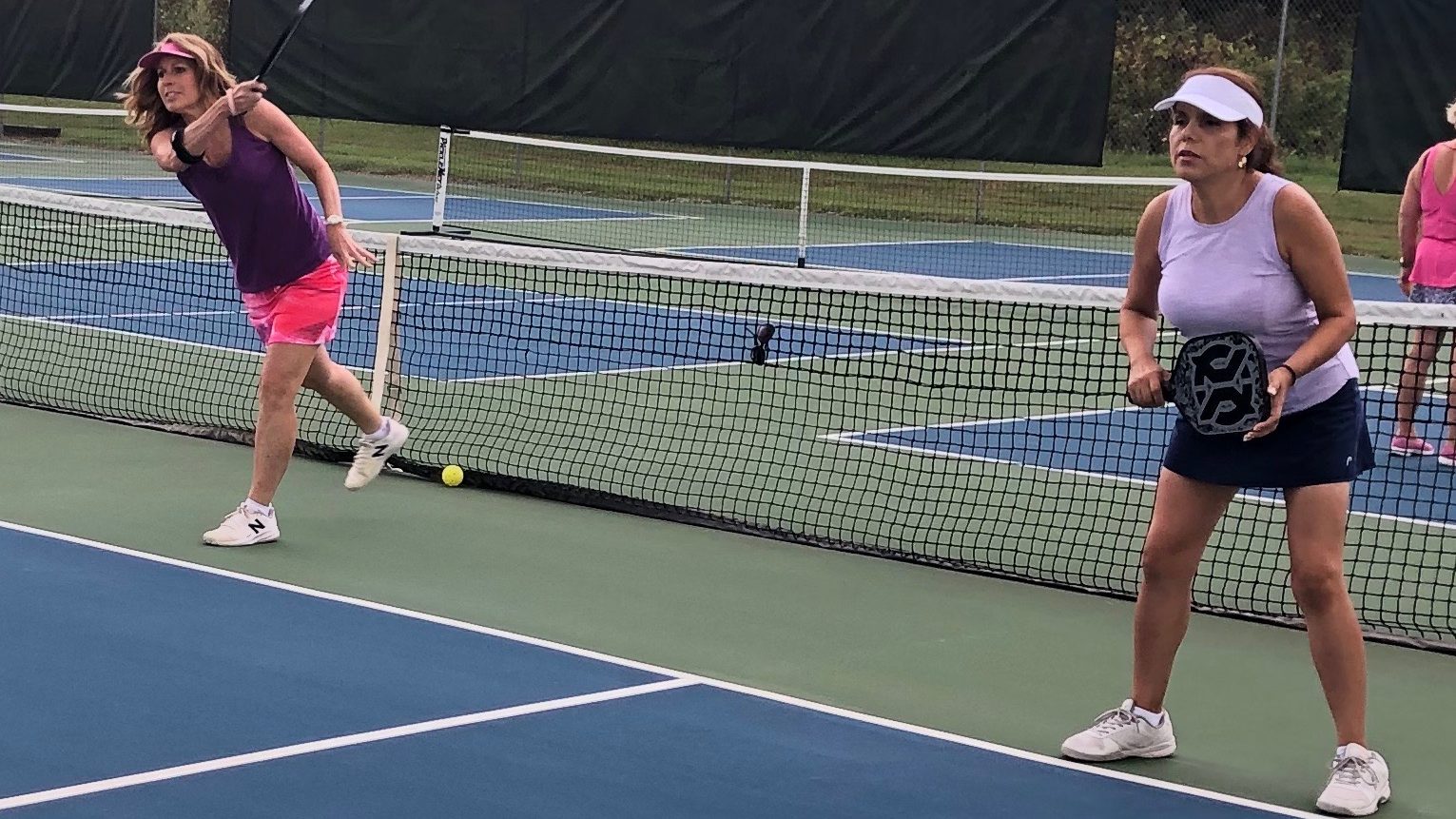 KNOXVILLE, Tenn. (BVM) — Angelia Blalock grew up in Sevierville, Tenn. Luz “Stella” Davis grew up in Colombia, South America. One is blonde and one is brunette, while both have two grown daughters. However, neither one ever played sports on a team nor have they considered themselves athletic.

But now, they kiss their husbands goodbye and hit the courts. They’re living the lives of athletes — going to bed earlier, eating better and resting on their days off. These women have become pickleball addicts.

According to an Athletic Business article, pickleball just may be the fastest-growing sport in America with more than three million players now competing. That number has been growing by more than 10% each year over the past decade.

“Yesterday, I was talking to my financial advisor,” Davis said. “He’s addicted to pickleball too.”

Pickleball is a mix of tennis, racquetball and ping pong. Players use special paddles and a heavy duty whiffle ball. Most games are played on retrofitted tennis courts that can accommodate two pickleball courts. The nets are smaller, and players use a short, solid paddle. The most common game is doubles, but singles are played too.

Growing up, Blalock said she was an extremely shy girl who spent much of her life sitting on the sidelines.

“Athletics was never a passion for me,” Blalock said. “I never wanted to be the center of attention and had a small group of friends that I interacted with. I only occasionally played sports in gym class, and tennis once in a while with friends.”

As a girl in Colombia, Davis says she did her best to sit out during gym class.

“When I was in my country, I did not participate in any sport,” Davis said. “Like a typical Hispanic, dancing was my way to exercise — salsa, merengue, vallenato, etc. I love to dance, but unfortunately it is not easy to find the venues or likeminded people to make this happen.”

However, just a few years ago, Davis would be introduced to a sport that she learned to love.

“I had no idea about pickleball till a friend, Kristie, told me three years ago,” Davis said. “She had been to visit her mother in Florida and had played with her mother’s friends and really enjoyed it. I tried it with her and then took lessons from a pro at a fitness center in Knoxville. Unfortunately, Kristie injured her knee and had to have surgery, so she couldn’t play anymore. I played some with my husband, Bobby, but he isn’t really the athletic type. So, for a couple of years I gave it up.”

As fate would have it, about the same time Davis was introduced to the game, Blalock went to Florida to visit a friend from Knoxville, Tenn. That friend had become a pickleball instructor who took Blalock to a class.

Blalock soon returned home from Florida. She and Davis often saw each other at church, on mission trips, etc. Then one day, Davis casually mentioned that she “used” to play pickleball.

“I couldn’t believe my ears,” Blalock said. “It was May of 2019. We immediately recruited a couple of friends to meet at a local park. Within a couple of weeks, Stella and I were playing twice a week. We were both about the same skill level and got some free lessons at a park. Then we went to a tennis club for a pickleball social on a Friday night and played with men and women at higher skill levels.”

Blalock recalled that when she first started playing pickleball, she fell in love with the sport instantly.

“I loved it immediately,” Blalock said. “It was similar to tennis, but it’s a faster paced game and I enjoy that. I’ve never had good reaction time and quick reflexes before, so it’s like God has now given me this ability.”

As with any sports, injuries will occur. That’s what happened to Blalock when she suffered a dislocated toe over the winter. Combine that with courts being shut down by COVID-19, and Blalock longed to get back to playing pickleball.

“This past January I had my first pickleball injury – I dislocated my toe,” Blalock said. “I couldn’t play for two months and I was in pickleball withdrawal. I was forced to keep my foot up. I started playing again, but COVID shut down all the rec centers and parks. During that time, I had my second injury doing yard work. I had two more months I couldn’t play.”

But as sports have returned after their hiatus, Blalock and Davis have both been able to return to the court, and they are taking advantage.

“Once COVID allowed us to get going again, I was playing four times a week,” Blalock said. “As I got involved with more groups, I started playing six times a week to now eight times a week. My husband, Terry, has been surprised that I’m playing so often. He’s known me since I was 15 and knows that I’ve never really played a sport in my life. Pickleball has caused me to get in better shape even though I exercised every day. Two days a week I play four to five hours a day. I never exercised that much!”

“This is a different time of our lives because of COVID,” Davis said. “We’re enjoying our families and now we’re enjoying playing pickleball and getting to make new friends. I had been wanting to find a way to exercise and God brought this opportunity to me. He wants us to take care of our bodies and he provided a way for me to do it. I’m grateful for my pickleball friends who have such an incredible attitude and are always encouraging. I still have a lot learn to improve my game, but I am enjoying every step.

“Now I have a funny tan. My feet are white and where the pickleball skirt stops it’s white. We play at an outdoor tennis club. At 5 p.m. it’s hot. The sun has been beating down on the pavement all day. Coming from South America, people think everybody loves heat, but no. I’m not someone who even walks her dogs outside when it’s hot. My hair gets frizzy crazy. But when I play, I camouflage my hair in a hat. Anything for the love of pickleball!”