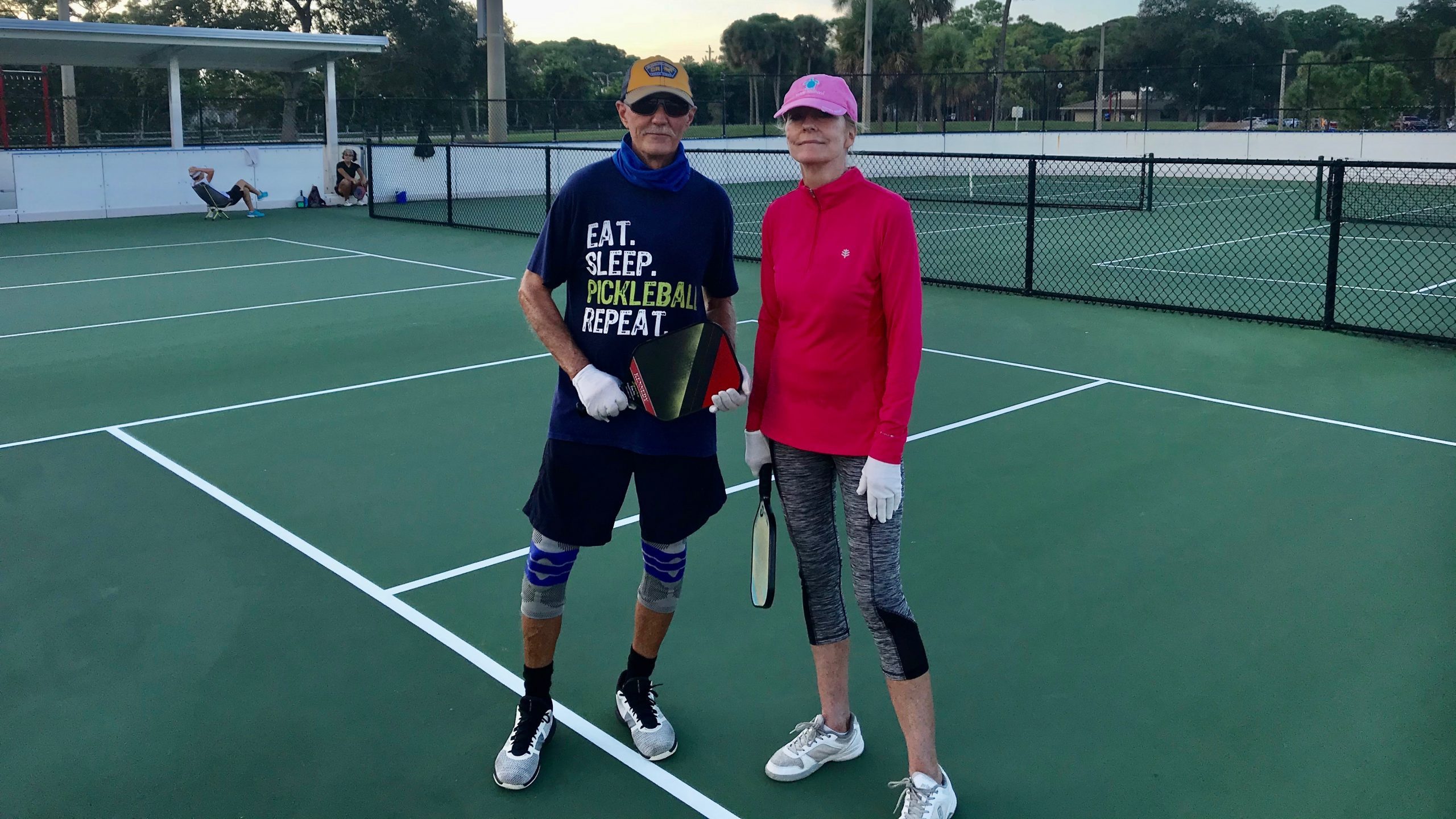 Married couple Ron and Pat Gestewitz have been playing pickleball together for three years. (Courtesy: The Gestewitz Family)

COCONUT CREEK, Fla. — You know the saying: the couple that plays together stays together, and for married duo Pat and Ron Gestewitz, that sentiment couldn’t be any more true.

Over the course of their marriage, Pat and Ron have participated in a variety of sports together, including mountain biking, bodyboarding and tennis. The couple played tennis for 40 years, and their skills in the sport are now being transferred over to their latest athletic endeavor: pickleball.

Pickleball, first played in the late 60s, is a form of paddleball sport that is the ultimate crossover between tennis, badminton and table tennis. In this sport, players use solid paddles to hit a perforated ball over a net into their opponent’s “kitchen,” the non-volley zone that is seven feet from the net on both sides. Players or teams win by being the first to score 11 points with a two-point lead against their opponent. You can either play as singles (one versus one) or doubles (two versus two).

While Ron started playing about three years ago when he retired, Pat was still working at the time, so she didn’t get many opportunities to play, but she soon jumped on the pickleball bandwagon with her husband. The two of them play doubles and are often teammates.

“We enjoy the fast pace of the game and have made many new friends playing the game,” Ron said. “We look forward to playing, and it gives us something nice to do together.”

The sport hasn’t come without its trials, however, including injury.

“I broke my wrist playing pickleball in October 2018, so I took off for about 10 months because I was scared to fall again,” Pat said. “I’ve been back playing again for about a year now.”

Being in their late sixties, injury from the game could come at a hefty price, but the couple tries to play every day. They usually manage to play around five or six times a week, either in the morning or evening, depending on their schedule.

Although they’ve only been playing for three years, Ron and Pat have already had an opportunity to meet and play with their pickleball role models, a mother-daughter duo in the Delray, Fla. area.

“Our pickleball role models are Leigh and Anna Leigh Waters, a mother and her 13-year-old daughter who are one of the best women’s double teams in the world,” Ron said. “We have watched them live numerous times, as well as watched their recorded matches on YouTube. We have also had the opportunity to hit with them on a few occasions.”

Along with having the opportunities to play with his pickleball idols and his wife, Ron has also entered various tournaments over the years. He has entered the Coconut Creek tournament three times and won twice, and he’s also entered the Delray tournament twice and got a silver medal both times with two different partners. On top of those achievements, Ron also played the Plantation tournament and got a gold and has participated in several senior games tournaments. Ron additionally plays in the Coconut Creek community pickleball league, where he enjoys playing with different people and giving new players tips on game play and technique.

With almost daily matches and occasional tournaments, Ron and Pat enjoy the healthy lifestyle and love to find new ways to train and practice their pickleball skills.

“Knowing we want to play our best helps us to make healthy choices in our diet and motivates us to train a little harder,” Ron said, and Pat agrees. “YouTube videos are very helpful. People need to practice to get good. Lots of people like to show up and just get in a game, but you can’t get better that way. YouTube also has pre-recorded matches of the professionals, which are very entertaining as well as informative. There’s a lot of strategy involved in the game that you can learn this way.”

While participating in tournaments is fun and all, Ron and Pat’s favorite part about the sport is that they’re able to play together and pass along their skills to their 10-year-old and 13-year-old grandsons.

“It’s pretty cool to have Nana and Papa playing a competitive match with their grandsons,” Ron said.

But for now, they’re enjoying playing the sport with each other and with their family, keeping their health and happiness at the forefront of their minds.

“Our goal is to enjoy an active life and continue to practice and improve our pickleball ranking to 4.0 and possibly get sponsored,” Ron said.

Two women, one addiction
Growing pickleball in H-Town and across America