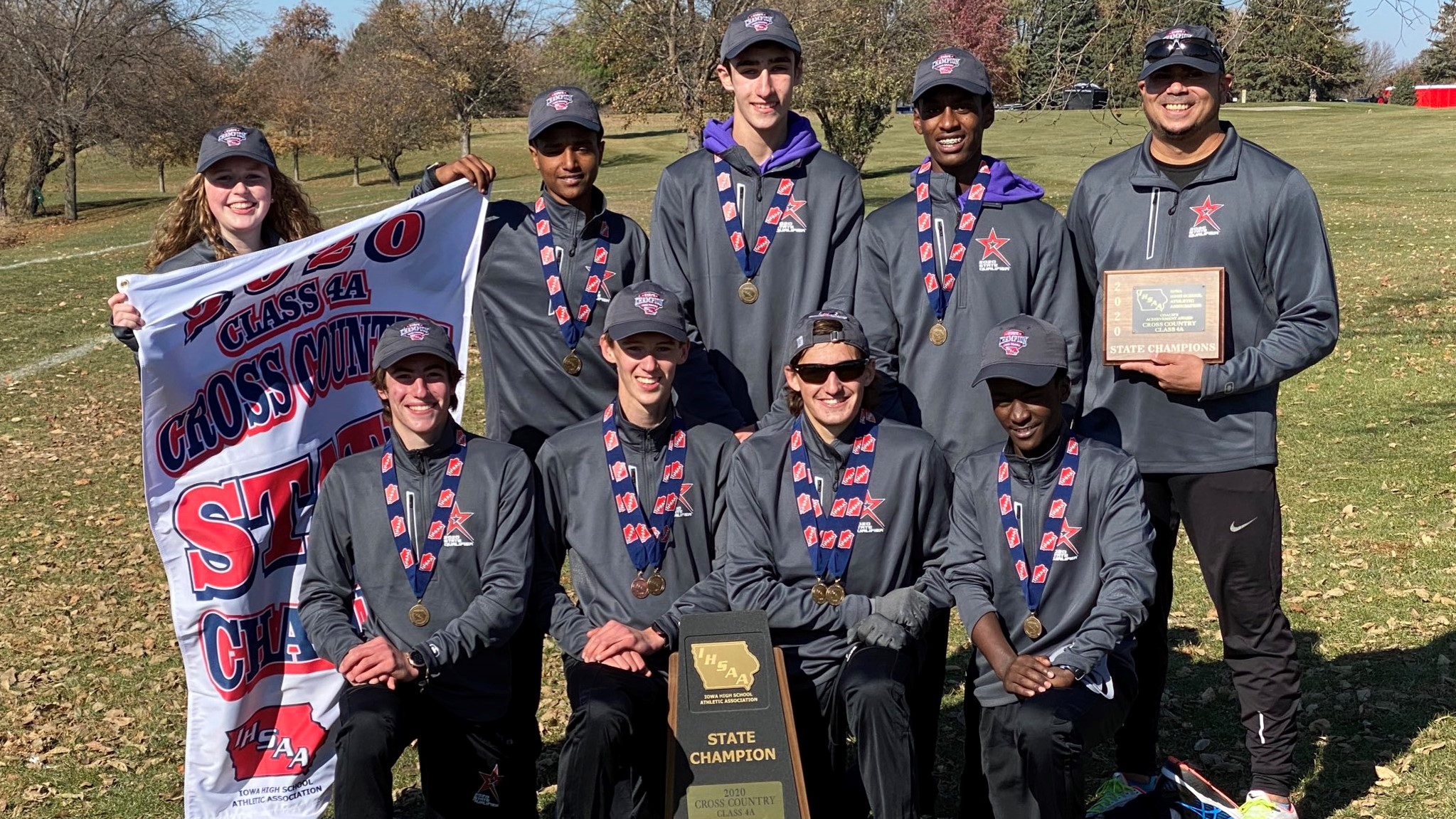 The road to their success started last season when they finished fifth at the IHSAA Class 4A state meet and they were looking to be strong contenders for the championship this year.

“I think we felt we had a really good thing we had started to build,” Marrero said. “Last year finishing fifth gave us a lot of confidence.”

The Northstars also had the entire team returning this year as there were seniors on that fifth-place team.

“Knowing that we were going to be bringing pretty much everyone back and we looked at the progress we’ve been making in the last few years heading into last year,” Marrero said, “we knew that we would stand the chance of having a really good season.”

The team also had added training time heading the season as its season was canceled in early March due to COVID-19. Unable to return to track, the boys decided to look towards the upcoming cross country season.

Once Marrero was allowed to contact his team in July, he got to work coaching the boys. However, this year in particular he had an added role of making sure everyone was having fun and not losing interest from the long hiatus from actual competition.

“I think the hardest part that we had to deal with was the lull in how long we were training,” Marrero said. “Right around late September, I had to keep reminding the kids we still have a month.”

Once the Northstars began the season, they didn’t take anything for granted.

“We kind of took the mindset of let’s enjoy the ride, lets have some fun and let’s just see what’s possible,” Marrero said. “Anytime we got the chance to race against quality competition we jumped all over it.”

The Northstars went into every week just happy to be able to practice. Even though they couldn’t do many of the team activities that would normally bring them together they still had fun.

“We didn’t want COVID to be the deciding factor that made this season not fun,” Marrero said.

From the freshmen on JV to their top runner, each person was made to feel important and their personal accomplishments were celebrated by the whole team. In this way, Marrero and the Sioux City North team created its own fun and team chemistry in spite of COVID regulations.

Another important contributing factor was the strong leadership Marrero had on the team which aided him and the coaching staff.

Seniors Colin Greenwell and Jaysen Bouwers along with junior Will Lohr were vital to the leadership and success.

“The three of them as captains have such different leadership styles,” Marrero said.

According to Marrero, Bouwers, the best runner on the team, was a motivator and someone who was always ready to celebrate the accomplishments of his teammates. When Bouwers crossed the finish line at the state meet this year, he gave himself a moment to celebrate his individual championship before turning back to cheer on his teammates as they too crossed the finished line.

Lohr, the second-best runner on the team, is always looking at the big picture. Planning out what the team needs to do and what the strategy should be moving forward. Also as junior he will be vital to any run the Northstars go on next season.

Greenwell is in Marrero own words “the glue” of the team.

“He’s been my go to for two years, I rely on him so much. There is just something about the way that he leads that makes kids want to follow,” Marrero said.

With their leadership and the skill on the team, Marrero was confident in his its ability. However, it was through two losses that he realized that they were setting themselves up for a strong push for the state championship.

The one that really gave him and his team confidence was at the Steve Johnson Classic. The Northstars lost by just two points to Dubuque Hempstead in a meet where Hempstead had three runners go under 16 minutes.

“That loss was probably the most confidence gaining moment that the boys had,” Marrero said. “After that point, they knew that if we just all click together we could have something really special.”

Heading into the state tournament they knew that their team was good enough to do something special. All of the experience coming back from last year also meant they knew what to expect out of the state meet and were ready for it.

“We didn’t need a perfect race,” Marrero said. “We just need a good race with all seven runners.”

That is exactly what they did. Bouwser finished first winning the individual state championship followed closely by Lohr who took fourth. Junior Yemane Kifle took 19th with sophomores Gabe Nash and Beshanena Gutema taking 24th and 27th respectively. Finally rounding out the seven-man team was freshman Natnael Kifle in 30th and Greenwell in 42nd.

In all, the Sioux City North team had a team score of 75 points, almost 10 points lower than Dowling Catholic which took second.

It was the first state championship the Northstars had won in any sport since the baseball team won 11 years ago. The whole school was electric, even sending two busses full of fans to cheer on their cross country team in the state meet.

On his way home from the championship, Marrero’s phone blew up with emails and texts congratulating him and the team for what they had done. This wasn’t just a win for Marrero, the boys on the team or even the high school. This was a win for the community.

“It’s still kind of setting in,” Marrero said, almost a week removed from the historical day.

He is making sure that everyone gets the chance to relish in what they accomplished this year before turning their back towards the future. However, he is confident in the future of the program.

Losing Bouwser and Greenwell will be hard, but the Northstars have strong runners in every grade and deep team.

“If we can just put ourselves in a position to be fast and celebrate each other we’re going to be very happy,” Marrero said.