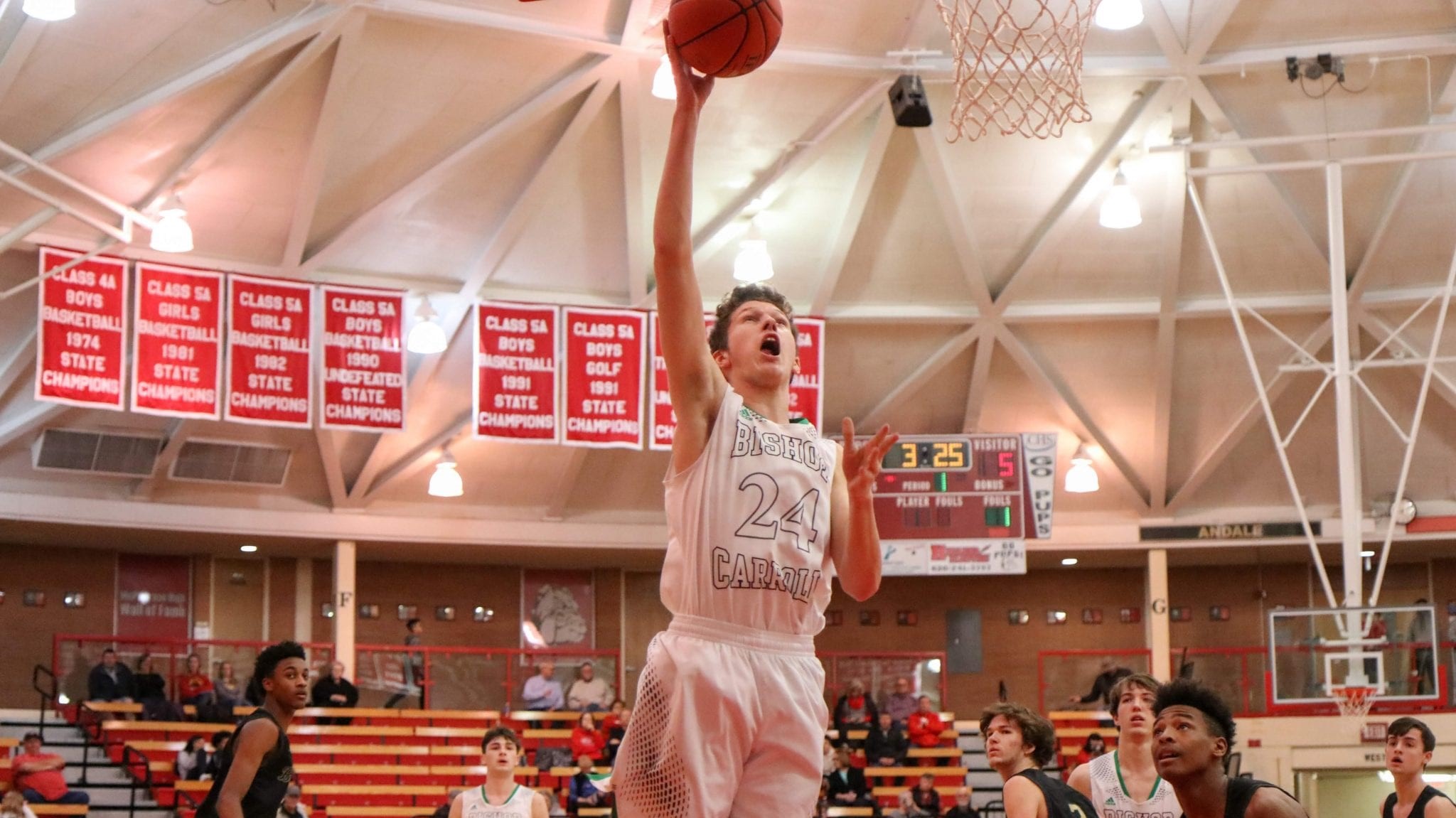 WICHITA, Kan. (BVM) — Bishop Caroll was the No. 3-ranked team in Class 5A when the Kansas Basketball Coaches Association (KBCA) released its preseason poll earlier this month, and the high ranking is deserved considering how much potential the Golden Eagles appear to have for the 2020-21 season.

But Bishop Caroll knows as well as anyone that potential alone doesn’t always lead a team to where it wants to be. This past March, the Golden Eagles were 21-0 and seemed to be on their way to making a deep state tournament run before they were upset by Andover Central on a last-second 3-pointer in the sub-state championship game. While Kansas wasn’t able to complete its state tournament anyway due to the COVID-19 outbreak, the surprising season-ending loss still helped put things in perspective for BC.

“They know that nothing is going to be given to them and we shouldn’t take things for granted,” Bishop Carroll head coach Mike Domnick said. “Their expectations are to do what we couldn’t do last year, get out of sub-state and make some noise on a state run.”

The Golden Eagles have the experience and talent to do what they couldn’t last year. While they’ll welcome in some new pieces to help fill the void left by the graduated seniors, they also bring back two of their top players who were juniors last season: Alex Littlejohn and Enrique Lankford. Littlejohn is BC’s do-it-all leader and a two-time All-City League selection. The 6-foot-4 forward averaged 12.6 points, 10.7 rebounds, 3.3 assists, 1.8 steals and 1.7 blocks last season when he was named a second team KBCA All-State selection.

“He just fills up the stat sheet,” Domnick said. “The word I continue to use for him is relentless. He just has a knack for where the ball is going. He gets so many loose balls. He creates turnovers with his quick hands. … He’s a pretty special player. Whoever gets him on their team in college is going to be very happy they got him.”

The same could be said for Lankford, a 6-foot-3 sharpshooter who averaged 14.3 points and made 46 3-pointers, shooting 47% from long range.

“He’s a very legit threat from beyond the arc,” Domnick said. “He’s got a great offensive skill set and he’s really improved on the defensive side as well. He’s also one of our point guards so he brings the ball up the court and initiates the offense at times. He’s just one of those kids who’s been starting since his freshman year and just brings so much experience to our squad.”

It’s that experience that the Golden Eagles will look to build on and learn from when their season kicks into full swing after the new year. They’ve split their first four games this season, with Littlejohn missing both of the games they lost. He was forced to quarantine after his younger brother contracted COVID-19.

“It’s just one of those things where it can hit different teams at different times of the basketball season,” Domnick said. “We’re all very thankful that we’re able to participate because we know the numbers suggest that kids at this age don’t pass it on or contract it as easily and they don’t seem to be impacted as negatively as other age groups so I’m glad that the higher-ups used some of that wisdom to allow us to play the sport.”

Assuming Bishop Carroll can remain relatively healthy, another successful season should be in store. This time, the Golden Eagles hope they can make the most of it with a run at their second state title in four years, which is well within the realm of possibility.

“We remember what happened last year but this is a new season,” Domnick said. “It is a different group, but they’re very talented, they’re very experienced and hopefully they will be able to play up to their potential most nights they go out on the court.”