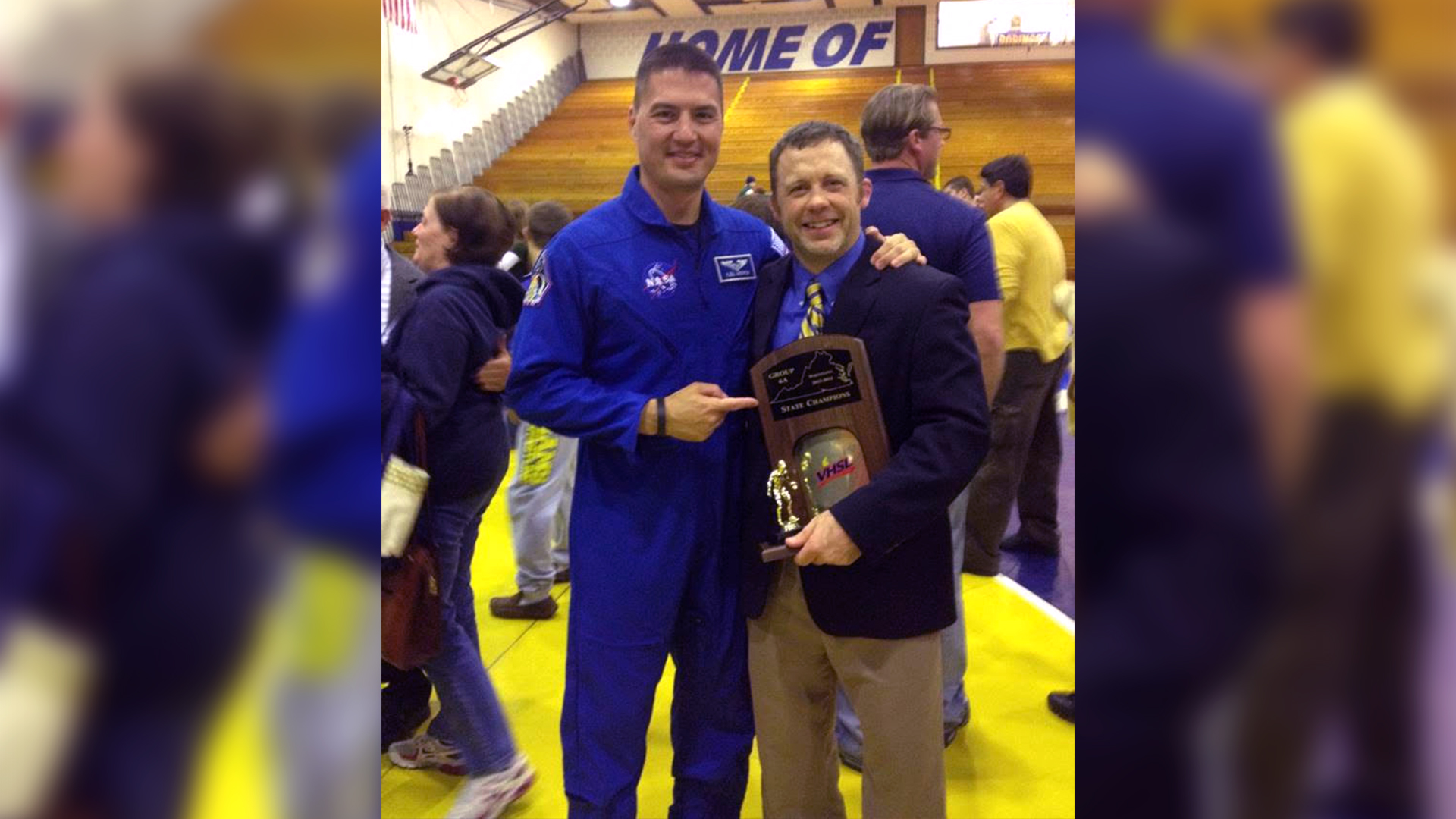 FAIRFAX, Va. (BVM) — In the late 1980’s, Kjell Lindgren was just a high school student with a dream. Lindgren had always been fascinated by the grand stories of space travel and journeys to galaxies far beyond the boundaries of Earth.

In 1981, Lindgren watched as the Space Shuttle Columbia launched into space, an image that would stick into the mind of the young dreamer. It was at that moment Lindgren realized his fascination with space travel could go beyond the bounded pages of his numerous storybooks and into his real life. Lindgren wanted to be an astronaut.

Before he could ever make his way into space however, Lindgren would have to survive the rigors of high school first. Lindgren not only survived, but made it look like a cakewalk.

Although he was born in Taipei, Taiwan, Lindgren would spend most of his early life learning in England while his father served as a member of the U.S. Air Force. Following his freshman year of high school, Lindgren’s family would move to Fairfax, Va. where he would attend Robinson Secondary School.

Lindgren would be all over the school community during his time at Robinson as a member of both the Rams football and wrestling teams, becoming a stalwart in his 171-pound weight class. As part of the wrestling team, Lindgren would help the Rams to back-to-back regional championships in 1990 and 1991 while he also won a conference championship of his own as a senior in 1991.

“He was one of these guys who was hardworking and good at everything they do,” former teammate and current Rams wrestling coach Bryan Hazard said. “He was real gritty and worked hard at the technical part [of wrestling]. He was going to go the whole match; he never quit. He was a grinder.”

During his high school years, Lindgren would also become an Eagle Scout as well as the Class of 1991 valedictorian. This was all in an effort to achieve his goals of becoming an astronaut, according to Hazard, who maintains a close relationship with Lindgren.

“That’s what he wanted to be the day he stepped into Robinson,” Hazard said. “Everything he did was about putting his best foot forward to become an astronaut.”

Upon graduation, Lindgren would enter the Air Force Academy where he would graduate in 1995 with a bachelor’s degree in biology and a minor in Mandarin Chinese. While at the academy, Lindgren would also be part of the “Wings of Blue” parachute team and was an instructor and jumpmaster.

Though he had finished his undergraduate degree, it would not mark his last in higher education. Lindgren would earn a master’s in cardiovascular physiology from Colorado State University in 1996. During this time, Lindgren got his first taste of working at the highest level of aeronautical experimentation as he would conduct cardiovascular countermeasure research while working at NASA’s Ames Research Center in Sunnyvale, Calif. This experience would be the start of a long relationship between Lindgren and NASA.

It was around the time that Lindgren earned his final degree from the University of Texas medical branch that he also began working for NASA at the Johnson Space Center. During this time, Lindgren would participate in a two-year process of training and evaluation for NASA’s next group of astronauts selected to travel to the international space station. Through a rigorous selection process that included over 3,500 applicants, Lindgren was selected as one of nine finalists to get the opportunity to go to space as part of the 20th NASA astronaut class. After years of training and preparation, Lindgren achieved his dream of space travel when he joined Expedition crew 44/45 as a flight engineer becoming the 217th visitor to the International Space Station.

Lindgren would log 141 days in space where he would participate in two spacewalks and a number of scientific experiments including growing and eating lettuce in the Space Station, becoming part of the first U.S. crew to eat food grown exclusively in space. In addition to his numerous professional works aboard the Space Station, Lindgren also logged his journey on social media through both his Twitter and Instagram pages becoming one of the faces of space travel on the internet in the process.

It's already been a week! Time is flying…and so am I! pic.twitter.com/YER1B5hIfB

Through his various postings, it is clear that this high school athlete turned astronaut still has sports very close to his heart. Whether it’s in photos repping his school pride for both Colorado or Colorado State or cheering for Team USA Rugby in the Rugby World Cup, Lindgren still had the competitive juices coursing through his veins.

Now, nearly four years after his initial trip to space, Lindgren is set to return once more, this time with plans to make it all the way to the moon. In December, NASA announced that Lindgren would be part of the crew for the program’s next project Artemis. The Artemis mission plan is twofold: to return humans to the surface of the moon for the first time in nearly 50 years to use advanced technology to learn more about the object and to help prepare humans for travel to Mars. The goal of Artemis is to have the next man and first woman on the lunar surface by 2024.

Selection into this group is a distinct honor and it comes as no surprise, given his past success in the space program, that Lindgren would be among the top choices on the list. For Lindgren, it is another honor among the many he has already been able to enjoy during his time with NASA.

“I’m grateful to be a part of this team,” Lindgren said in a NASA video. “You know getting to do this job is not an individual accomplishment. It represents [the] effort and work of folks who have been walking alongside me, my family, classmates, colleagues, teachers, mentors, coaches. I am grateful for their investment of time and energy in helping me achieve this goal.”

Though he may not be an athlete anymore, Lindgren has still kept communication with not only his former high school, but also his former wrestling program. Lindgren and Hazard have maintained close communications since Hazard took over the program in 1997 and Lindgren became one of the program’s earliest boosters. The pair have been so close in fact, that when Lindgren did a virtual Q&A session with Robinson students from the International Space Station, it was Hazard who was the emcee of the event.

“It was incredible,” Hazard said of the event. “To be able to present my friend that was doing something less than 1% of people get to do is something really special. … He’s an advocate for the school and for the program and he doesn’t have to be. That’s just the kind of person he is.”

With this, the ties to his wrestling program really isn’t far off and Hazard is not afraid to show how proud he is of his former teammate.

“He is the poster child for setting goals in our program,” Hazard said. “We talk about people from the program and what you can achieve outside of wrestling when you’re done and he proves that anybody who wants to do something can do it. He personifies everything good about sports. He is an amazing human being.”

Even though his high school and wrestling days are over, Lindgren will still look back on how important those times were to get him where he is today. Sure, he wanted to be an astronaut long before he began walking the halls at Robinson, but the step was still a critical one to get him to space as were all the other steps he took on his way. Now as he prepares to take his first steps on the lunar surface, Lindgren will not only look back on his journey, but on the planet he has called home as well.