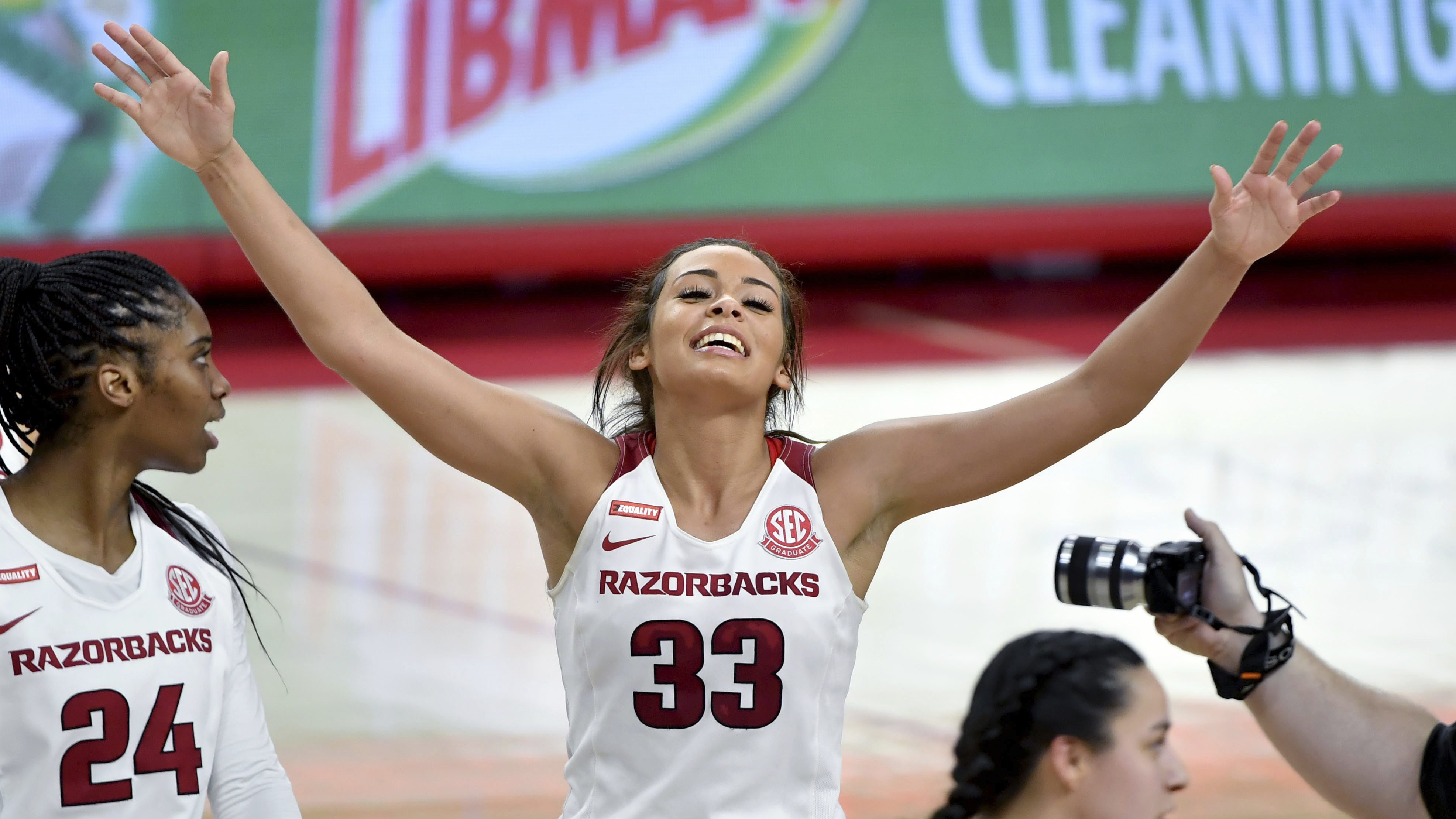 FAYETTEVILLE, Ark. (AP) — Chelsea Dungee scored a season-high 37 points to lead No. 19 Arkansas to a 90-87 victory over No. 3 UConn on Thursday night.

It was the second win of the season for the Razorbacks (12-6) over a top five team as they beat then-No. 4 Baylor on Dec. 6.

Dungee scored 22 of her points in the second half, including 13 in the third quarter as Arkansas built a 13-point lead.

“There’s performers and then there’s performance,” said Arkansas coach Mike Neighbors about Dungee’s game, “but that kid, when the stage was big and a big shot needed to come, she delivered.”

Arkansas then scored the next 10 points to make it 87-79, the last three on a three-point play by Dungee, who had 15 points at halftime before scoring 10 in the third quarter.

UConn pulled within 90-87 on Christyn Williams’ layup with 34 seconds left, but neither team scored again. Williams finished with 16 points in her return to her home state.

Freshman Paige Bueckers scored a season-high 27 points for the Huskies, including 15 in the fourth quarter. She missed the Huskies last game while recovering from a right ankle injury.

After Arkansas’ Amber Ramirez missed a layup with under five seconds left, the Huskies did not get a time out until three-tenths of a second were left. Westbrook tried to get up a shot but time expired.

“We had a strategy in the huddle that if there was enough time left we’d get a break-away,” said UConn coach Gino Auriemma, “but if we got a rebound and there was five seconds we wanted a time out. What are you going to do?”

Coming into the game, Arkansas had lost three straight games to ranked opponents including a 75-73 loss to No. 22 Georgia on Monday.

Arkansas had just eight players available for the game because of COVID-19 protocols with six players out. Dungee and Ramirez played 39 and 38 minutes respectively.

“I don’t know what their issues were,” said Auriemma when asked about the missing players. “If you ask me, the wrong guys were in protocol.”

There was a sellout crowd of 4,400 for the game, which marked just the second time this season UConn has played in front of a crowd.

“Our crowd was phenomenal,” said Neighbors. “I felt like they accounted for about 10 to 15 points.”

Arkansas was originally scheduled to take on Vanderbilt on Thursday, but the Commodores have shut their women’s basketball program down for the remainder of the season because of covid-19-related issues.

UConn’s game with Providence was also postponed, leaving the two teams with an open date. The universities were able to quickly arrange the game to fill the hole in the schedule.

“A week ago at South Carolina after a tough loss, we posed the question to the team ‘How do you want to fill this game,’” said Neighbors. “‘Do you want to play UConn?’ They said let’s go. A lot of teams, a lot of kids would have said let’s take the time off or can we find a team that hadn’t won 11 national championships, but they didn’t.”

UConn: The Huskies visit No. 17 DePaul on Sunday.

Arkansas: The Razorbacks will host Auburn on Sunday.