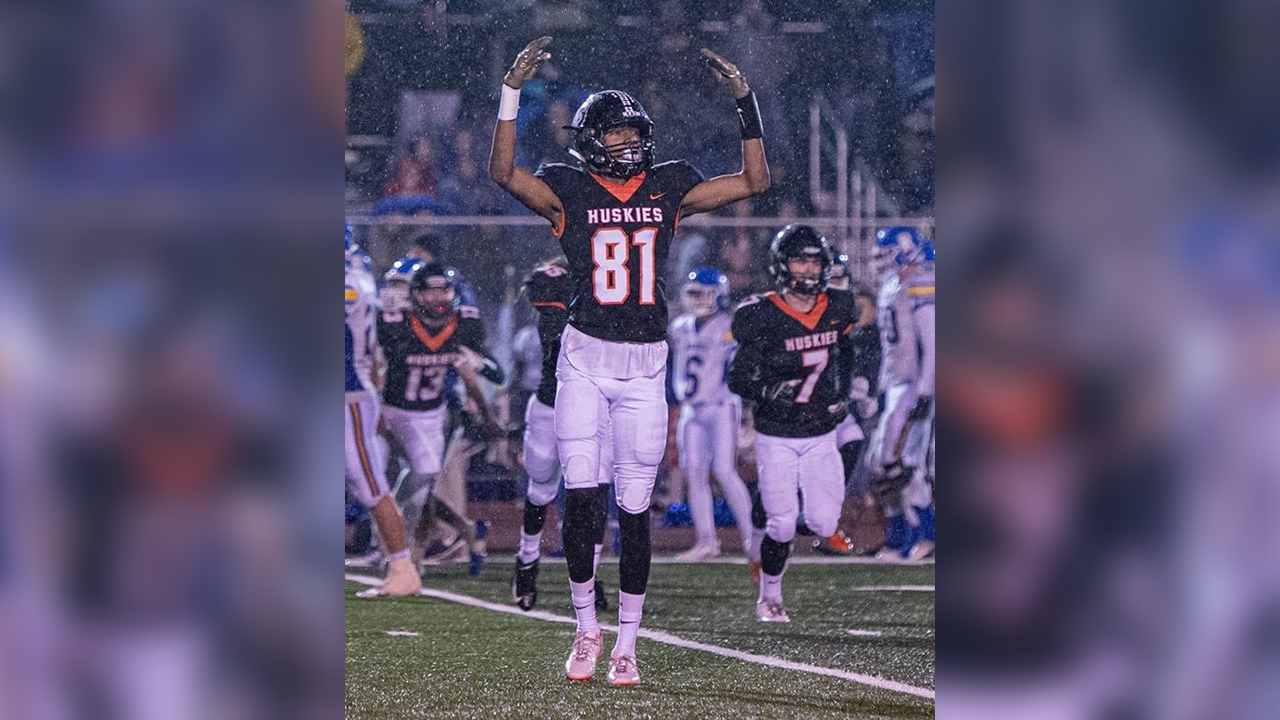 PAWHUSKA, Okla. (BVM) — On Feb. 10, Pawhuska High School wide receiver Mason Gilkey announced that he had committed to Oklahoma State University. A football and basketball star for the Huskies, Gilkey decided he would pursue a football career.

just throw it up💫 pic.twitter.com/7xRV2r0JGE

“My freshman year, I really wanted to be a basketball player,” Gilkey said. “I didn’t see myself playing football at the collegiate level. And then, [coach] Hennesy sat me down and talked to me. It was a man to man talk, and it made me realize that chances within football were higher than my chances in basketball.”

It was during Gilkey’s freshman year that coach Matt Hennesy saw his potential as a wide receiver. Even with Gilkey’s love and passion for basketball, Hennesy knew that football was Gilkey’s sport he should be pursuing.

“He came in after spring [his freshman year] and told me he wasn’t going to play football anymore,” Hennesy said. “I said, ‘First of all, you don’t play point guard. You’re 6-3, probably get to be 6-4. [There are] not many 6-4 power forwards in the NBA or Division I. But there are a bunch of receivers that look like that. I said, ‘Just stick with me and let’s get through then next season and if you don’t like it after next season, then I’ll give you my blessing, and you can do some basketball.’ I told him, ‘Let’s not limit our options.’ He took it to heart, and low and behold, here it’s worked out, and he loves it. It’s a blessing, and they’re getting a good one.”

Hennesy doesn’t have a rule saying you have to participate in just one sport. He encourages all his athletes to play another sport once the football cleats are hung up for the year. Transitioning from a sport you love so much can be challenging, but for Gilkey, Hennesy, and what he was building on the football field helped make that transition a lot smoother.

Gilkey is coming off a strong junior year where he was second in the state with 1,261 receiving yards. He also hauled in 56 catches and 26 touchdowns.

“The thing about Pawhuska is, we’re all about pride,” Gilkey said. “Our community’s great, and we’re all about each other. I really love playing for Pawhuska. And having [coach] Hennesy there helped a lot. He’s been a big help.”

Now Gilkey, who will be a senior next year, is looking forward to playing at Boone Pickens Stadium in the upcoming years. He’ll be joining a program with a rich history of producing top-tier talent at the receiver position. One notable name OSU has produced is Dez Bryant, who had a long career with the Dallas Cowboys. Another name is Tylan Wallace, who graduated this year and is a highly sought-after prospect in this year’s NFL Draft.

And Hennesy believes Gilkey can be an impact player in the Cowboy offense.

“This what I told all the OSU guys that called me, I said, ‘he will be a dude, but the time it’s said and done,’” Hennesy said. “[But], it’s not going to take him long. He’s one of those guys that adapt fast and does whatever he has to be a [great] player.”

As Gilkey looks ahead to his future at OSU, he is hoping to become a business major, but he also wants to be the best person he can be when he reaches Stillwater.