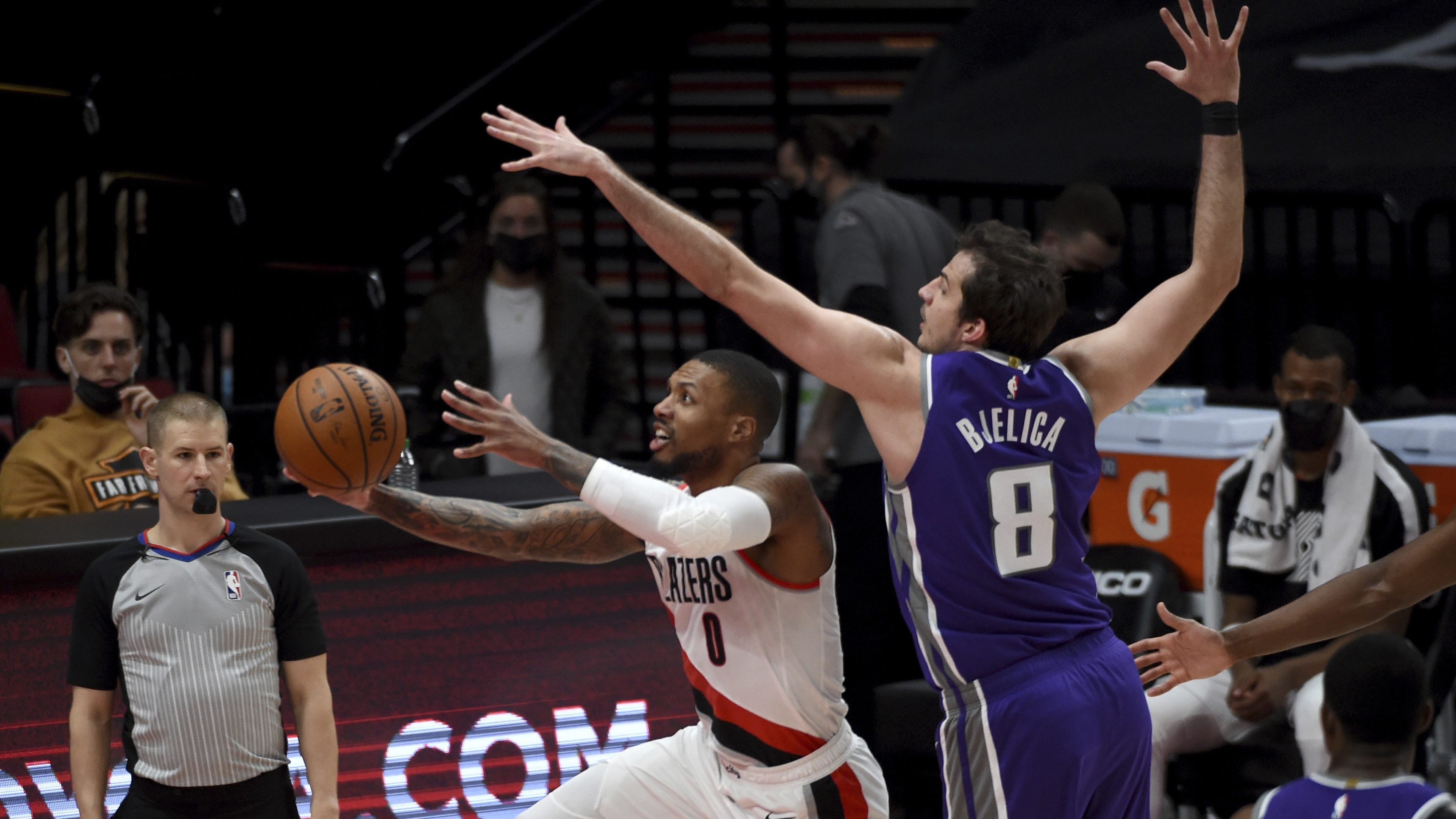 PORTLAND, Ore. (AP) — Damian Lillard had 44 points, including 10 straight at a key moment down the stretch, to give the Portland Trail Blazers a 123-119 victory over the Sacramento Kings on Thursday night.

Enes Kanter added 22 points and 21 rebounds for the Blazers, who have won three straight heading into the All-Star break. Lillard finished with eight 3-pointers.

De’Aaron Fox had 32 points, 12 assists and eight rebounds for Sacramento, which had six players score in double figures.

Sacramento went up 108-103 with 3:49 to go on Harrison Barnes’ layup and Buddy Hield’s 3. Lillard responded with a pullup jumper, a layup and a pair of 3-pointers in quick succession to put the Blazers ahead 115-108 with just more than a minute left.

Sacramento wasn’t quite done, pulling within 119-118 on a 3-pointer with 6.6 seconds left. After Gary Trent Jr. made two free throws for the Blazers, Fox hit one then appeared to miss the second intentionally. After a review over whether the ball hit the rim, Portland got the ball back with 3.7 seconds left and Lillard was fouled to close it out.

Both teams were playing the second of a back-to-back heading into the All-Star break.

The Kings had won two of their last three games after a nine-game losing streak. Sacramento was coming off a 123-120 victory Wednesday night over the Lakers, who were playing without LeBron James and Anthony Davis.

The Kings were still without reigning NBA rookie of the month Tyrese Haliburton, who missed his fourth game with a calf injury.

Portland was coming off a 108-106 victory over the Golden State Warriors. Lillard hit a 3-pointer with 13.7 seconds to go to secure the win.

Nemanja Bjelica’s 3-pointer gave the Kings an early 21-16 lead. Lillard’s 3 late in the opening quarter put Portland up 28-27, and the All-Star had 15 points by the end of the period.

The Kings kept close through the rest of the half, trailing 59-56 at the break. When Portland appeared to start puling away, Hield’s 3-pointer got Sacramento within 73-72.

Kings: Hield was questionable for Sacramento with a right ankle sprain but he started. He had 29 points against the Lakers on Wednesday.

Trail Blazers: The game was delayed for a time in the second quarter when the shot clocks at the Moda Center went out. … Portland has won five straight against the Kings.

HELP ON THE WAY

The Trail Blazers announced that guard CJ McCollum, who has been out with a left foot fracture, has been cleared for contact practice. McCollum has been out since Jan. 16 when he injured his foot in a game against Atlanta.

McCollum, who was averaging 26.7 points before he was hurt, will be key to Portland’s playoff push.

The Blazers also said center Jusuf Nurkic continues to rehab his right wrist fracture and will be evaluated next week.

The Kings host the Houston Rockets next Thursday after the All-Star break.

The Blazers host the Phoenix Suns on Thursday.