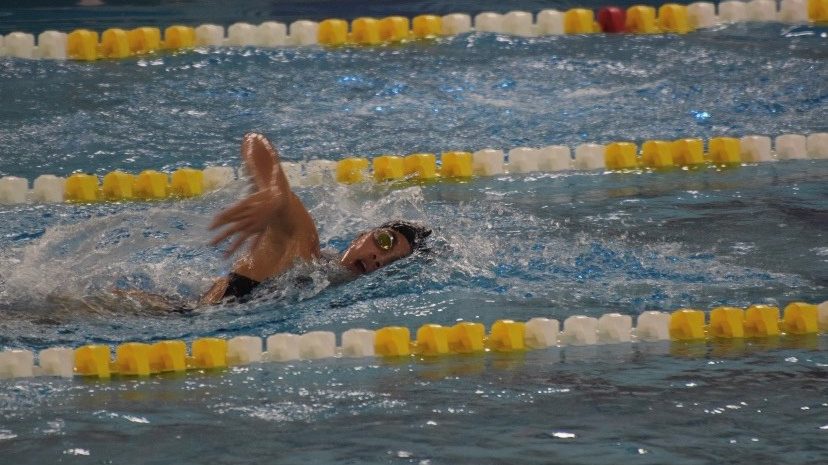 Thanks to her dual citizenship, Nina Mollin will have the opportunity to compete in Canada‘s Olympic Trials this spring. (Photo: Stephanie Dohrn)

SCHAUMBURG, Ill. (BVM) — Nina Mollin is one of those rare athletes who may have a chance to shine on sports’ biggest stage. The Schaumburg High School junior is an elite swimmer, and will compete in the Olympic Trials this April.

Although she is a Schaumburg, Ill. native, Mollin’s dad is Canadian, which has allowed her to gain dual citizenship. Because of that, she has the opportunity of a lifetime this spring.

Last year, Mollin was invited to swim the 400-yard individual medley (IM) and the 200-yard IM at Canada’s Olympic Trials. But once the pandemic hit, she learned her opportunity would have to wait until this spring, which at the time was tough news for the Schaumburg junior.

“When I heard that it would be pushed back, I was upset only because I wasn’t sure if I could handle being nervous for another year about the trials,” Mollin said.

However, that extra year to prepare has been beneficial for Mollin.

“During this year, I’ve grown a lot as a swimmer both mentally and physically,” Mollin added. “I’ve worked hard on my backstroke and also my confidence to help me mentally prepare for the meet.”

Now, Mollin will soon have the chance to prove her work has paid off. As she approaches one of the biggest meets of her career so far, she remains confident and excited.

“My goals for Olympic Trials are to just have fun and race as hard as I can,” Mollin said. “I want to be able to touch the wall and know I did everything I could in that event. I also want to just enjoy the experience.”

Mollin has dreamed of the Olympics for a while. Although she did not always think she could get to this point, she is thrilled for the possibility to represent Canada.

“Being able to represent my country would be such an amazing experience for me,” Mollin said. “It would be a chance to show how hard work pays off and show all swimmers that anything is possible. It’s been a dream for a while but I never really thought about it much because I never knew that I’d be close enough to reach that point.”

It takes a lot of work by any athlete to get to an Olympic level, and Mollin is no exception. First entering the pool at age 6 while following in the footsteps of her sister, swimming has been Mollin’s primary sport her entire life, and she has taken a great passion for it.

“I’ve grown to love the sport because of the people and the feeling of achieving stuff,” Mollin said. “I’d rather be in the pool than running around sweating.”

Mollin also competes in the 200-yard breaststroke and 100-yard fly in addition to the 200 and 400 IMs. As a kid, Mollin admits she wasn’t that good of a swimmer. After moving to Seattle for about a year, she returned to Illinois where she began swimming with a local club called Academy Bullets. From there, her career in the pool changed.

“That’s when my swimming career took off,” Mollin said. “When I moved back to Illinois I found Academy Bullets and they have helped me turn into the swimmer I am today.”

In addition to club swimming, Mollin has also starred in the pool at Schaumburg High School. As a freshman, Mollin adjusted to her new team and had a great first season, placing at state.

By sophomore season, Mollin continued to improve in each of her events. Her campaign was highlighted by a second-place finish at state in the 200 IM.

“I was really proud of myself both years and when I got second place my sophomore year I was nervous before I swam but it was all worth it by the end of it,” Mollin said.

Mollin’s junior season had a much different feel than her first two. With the IHSA’s Covid restrictions, team activities were very limited and no state championships were held. But Mollin still had a good season, and would place first across her events at sectionals.

Coming off a strong but abbreviated season, Mollin is already looking forward to her senior year. She hopes to help her team continue to grow and place in the top-three at state provided things are back to normal.

Beyond high school, Mollin plans to swim in college as well. She has already been in touch with a few schools in both the United States and Canada. The swimming standout will wait to see what her summer has in store after the trials before making an official decision.

But for now, the Olympic Trials remain the swimmer’s main focus. Mollin will soon leave for Canada to quarantine, and then begin training with a swim team there.

Even if she doesn’t achieve her ultimate goal of making Canada’s swim team this time around, Mollin does not plan to stop pursuing her dreams.

“If I don’t make it this time, I plan on working really hard to possibly reach it at the next trials in 2024,” she noted.

But if and when she does finally make an Olympic appearance, Mollin will not forget the hard work, or the people, who have helped her achieve her biggest goal.

“My ultimate goal is to take all the opportunities I get,” Mollin said. “I’ve been working everyday so hopefully one day I’ll be able to go to the Olympics and represent Canada.

“When I do reach that point, I’ll think back to the moments when I was always worried about not doing well and the moments where my friends have helped me throughout my swimming career. I’m very thankful to have such a supportive community especially through Academy Bullets and Schaumburg High School.”