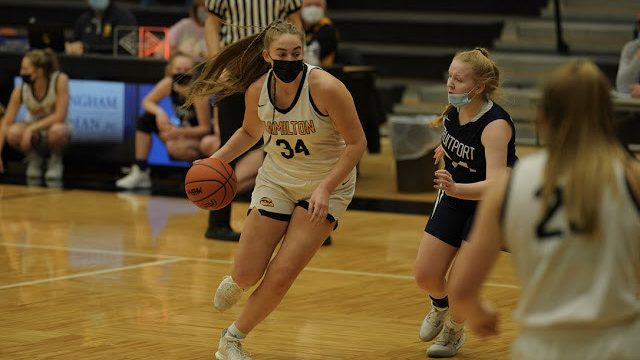 AJ Ediger has seen plenty of success playing at Hamilton High School and will hope to keep it going when she joins the Iowa Hawkeyes. (Photo: Travis Williams)

HAMILTON, Mich. (BVM) — The Edigers are well-known in Michigan for their athletic success. But Hamilton High School senior basketball star AJ Ediger may just be at the top of the family list.

Ediger began her athletic career differently than most, as she grew up on a farm and was homeschooled throughout her life prior to high school.

“It definitely gave you a lot more freedom,” Ediger said. “As kids, we could just run around the farm or play with the animals. It was definitely a very unique experience growing up and I don’t think I would’ve done it any different.”

She began playing on a local organized homeschool team at 9 years old, and it was no surprise to anyone that she would have immediate success.

The Ediger family has been involved with sports for generations. Ediger’s mom competed in track and field and basketball collegiately, while her dad also played college football. Her three older sisters also played basketball while Ediger grew up, which ultimately attracted her to the sport.

“It just kind of helped me grow and fall in love with the game,” Ediger said. “I got to grow up around it and go to practices like it was a daycare and play basketball. I think being exposed to the game for so long definitely helped my basketball IQ.”

Eventually, Ediger would begin playing club basketball as well. Over the last several years, she has played locally with West Michigan Drive, and has helped grow the club while gaining experience against top competition.

“The West Michigan program wasn’t at a great place when I joined, so being with it and helping it build up and grow definitely made it feel like one of my big accomplishments,” Ediger said. “I loved West Michigan Drive and it was such a great experience playing with them. I’m really going to miss them a lot.”

Playing with West Michigan Drive, Ediger began gaining plenty of college exposure, particularly before her freshman year of high school. The 6-foot-2 post player not only has size, but excels at all facets of the game.

“I’d say something that puts me at the DI level is my size and the way I move,” Ediger said. “I can handle the ball a little bit and shoot from the outside, so I have a little bit of everything.”

“AJ’s basketball IQ sets her apart from other players,” Schwark said. “She sees the game so well and has the ability to score from everywhere on the court. She dominates in the paint, can score off the dribble and is also a major threat from deep behind the three-point line. Players like her don’t come around often.”

It wasn’t before long that some of those Division I schools were taking notice of Ediger. She received her first official offer from Western Michigan, and her first Big Ten offer was soon to follow from the Iowa Hawkeyes.

Iowa actually had not planned to recruit Ediger, but came across her spectacular talent on a separate recruiting trip. From then on, they made sure to keep in touch with the basketball standout.

Ediger continued to keep an open mind about playing elsewhere throughout her early high school tenure. But Iowa never left her mind.

“I visited Iowa a lot and just fell in love with it more and more every time I saw it,” Ediger said. “Every school I went to, I would compare it to Iowa. I would sometimes almost be brought to tears when I had to leave Iowa. I just kind of had a feeling and knew right away.”

In 2019, Ediger verbally committed to become a Hawkeye. Although she didn’t know much about Iowa prior to the recruiting process, the campus, coaching staff and team members have all drawn her in, and now she can’t wait to get started with her college career.

“I didn’t even know that Iowa existed,” Ediger said. “I had no idea about Iowa until they contacted me. It was just a mind-blowing thing at the time and a really humbling experience.

“I’m so excited to play at Iowa and cannot wait. I can’t wait to get there and learn from the players who’ve been there. It’s a really cool environment that I’ll get to be a part of. I just want to work, adapt and get better and better to see how far our Iowa program can go and grow. I just want to do as much as I can for the coaching staff and my teammates, and I hope that it sets me up for an athletic career after college.”

Coach Schwark is also excited for Ediger’s time at Iowa, and believes it will be a perfect challenge and opportunity.

“I’m very excited to see AJ play at the next level,” Schwark said. “She’s extremely competitive and likes to be challenged, so I think playing in the Big Ten will be a lot of fun for her. Iowa’s coaching staff is one of the best in the business. They have built a great program and I think AJ will be a big part of what they’re doing going forward.”

Ediger is set up for a spectacular collegiate career, and has proved why at Hamilton High School. Initially, as a homeschooled student, the transition to high school for the basketball standout was a big adjustment, both on and off the court.

“The transition was definitely strange going from being homeschooled to going into high school, but we kind of eased my way into it,” Ediger said.

On the hardwood, Ediger made an immediate impact on her team. Hamilton would end up winning its conference, and also making a run to the state quarterfinals in 2018.

That would set the stage for another impressive season in 2018-19, where the Hawkeyes would finish with a 25-1 record. They would fall just short at state in a heartbreaking loss where they led most of the way.

“Usually I go back and watch film on our games,” Ediger mentioned. “That’s just a game I have not been able to watch again after playing it. It still stings a little bit but I think it’s a great experience to have going into the college level.”

As a junior, Ediger came back with a vengeance, averaging 22 points and nearly 12 rebounds per game. Her team did come out and lose its first four games, yet rebounded throughout the rest of the campaign. But just as the Hawkeyes were ready to make another run to state, the season came to a screeching halt.

“That was definitely a year of adversity with a lot to overcome,” Ediger explained. “It was really strange when the season came to an end and of course we were all really sad. At the same time, it was a global pandemic and there were people who were in much worse positions than we were.”

One positive of her junior season, however, was that Ediger scored her 1,000th career point.

“It was something that I really wanted to hit and I knew I could,” the 18-year-old said. “It was a really cool experience.”

Over this past summer, Ediger did still get to play travel ball. However, her senior season remained in the balance until the early winter.

“The dates just kept getting pushed back further and further three or four times in a row and it just kind of took a hit to the team’s hopes of being able to return,” Ediger said. “It was definitely really stressful and for me, it was hard to find a gym to get into. It kind of freaked me out thinking about not having a season before Iowa.”

Thankfully, Hamilton finally got to begin its season. Although the Hawkeyes wouldn’t make the deep run they had in prior years, Ediger loved playing with her high school team one last time while continuing to expand and improve her game. She has been part of a lot of winning through the years at Hamilton, and has always remained focused on the team.

“AJ has been a huge part of Hamilton’s success the past four years,” Schwark said. “She has improved as an individual every year and also cares deeply about the success of the team.”

Currently, Ediger is ranked No. 39 overall by ESPN in the 2021 class. While some athletes may look past the rankings, Ediger sees it as a special honor.

“I am honored,” she said. “The athletes that are on that list are insane. Being able to be a part of that is pretty cool.”

Throughout high school, Ediger has also competed in track and field, but has had an exceptional volleyball career as well. So good in fact, that she was also recruited to play that sport at the DI level, and even approached by Iowa to play both.

“That was probably one of the hardest decisions I’ve had to make,” Ediger said about choosing basketball over volleyball. “I love volleyball and it’s fun to play. Iowa volleyball actually contacted me to ask if I wanted to play both, but that would be a lot to handle. At the end of the day, the decision came down to that I would have more of a future after college with basketball than volleyball.”

Ediger will be a star no matter where she goes from here, but she does hope that post-college future could be a professional basketball career.

“I would really like to play overseas or possibly the WNBA,” Ediger said. “I really can’t see my life without basketball, it was just something that I grew up around and it’s always been a part of me. I think it’s definitely going to take a lot of work to get up there and play at that level. It’s a lot to work for but I really look forward to being able to work hard and expand my game to get to a point where I could be playing after college.”