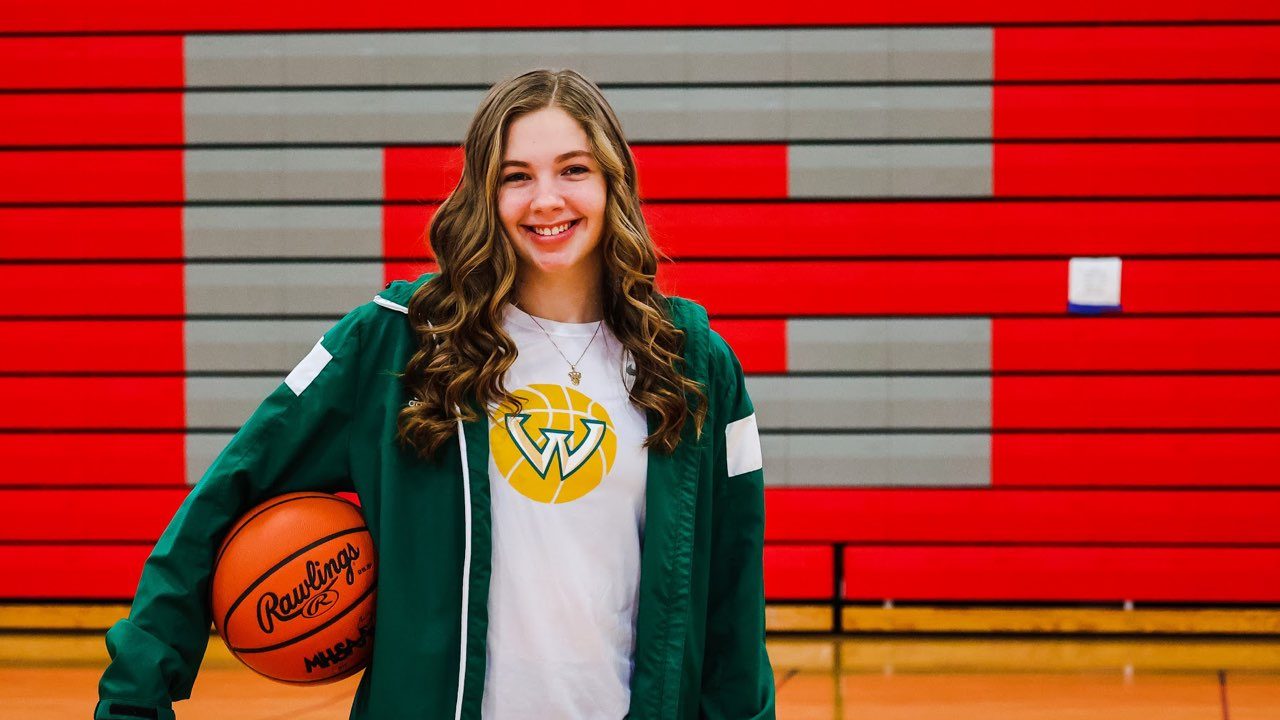 Shea Tripp has been a standout basketball player at Michigan Center, and she will continue her career at Wayne State University. (Photo: Mel Hancock)

MICHIGAN CENTER, Mich. (BVM) — Shea Tripp has always been a good basketball player. But for a while, it seemed as if she was being under-recruited.

However, it didn’t take long before the offers came for Tripp. Now, she will have her opportunity to play in college at Wayne State University.

“I trusted the process and eventually the offers started rolling in,” Tripp said. “I liked all of the schools that I went to, but I kind of always knew from the start that Wayne State was my favorite. I love the coaches there, the atmosphere and the campus. There’s a lot of opportunities there and I think I’m just going to have a great time.”

Tripp also received interest from several Great Lakes Intercollegiate Athletic Conference schools, and was very intrigued by Ferris State in particular. But she is happy to become a Warrior, and hopes she can leave a big impact on the program.

A big reason for Tripp’s opportunity to commit to Wayne State came from her time playing club basketball with Michigan Premier. Playing up against top level competition, Tripp has continued to develop her game over the years while forming a tight-knit bond with her teammates.

“It just made me much better and made me work harder,” Tripp said. “Michigan Premier is definitely like a family to me and it’s more than just a basketball team. I definitely would not be here without them.”

While Michigan Premier has become like a family, there is someone in Tripp’s actual family who she could look up to growing up. Her older sister, Alize, is also a star basketball player, and is currently in her first season with Concordia University Ann Arbor.

“Every single day, we would be in the driveway playing one-on-one,” Shea said. “It was always a competition and we were always trying to be better than each other. I think that helped in the long run. She’s always been there and we’ve just always had this connection. I’ve gone to a million basketball camps with her and I think both of us could say we helped each other get to where we are now.”

Shea began playing alongside her sister in second grade and immediately fell in love with it as she played up against fourth–graders. The forward quickly developed a strong work ethic, hustle and good footwork.

By sixth grade, Shea got her first taste of AAU basketball with the Jackson Jets. It was at that point she realized she wanted her future to be on the hardwood.

At Michigan Center High School, Shea was a varsity player from day one and received plenty of playing time in the post. Although she was more of a role player in her freshman season, it was a good learning experience as the Cardinals made a deep postseason run.

Graduating three seniors after that season, Shea took on a bigger role during her sophomore year.

“That’s when I kind of realized my role on the team was to be a scorer and a leader,” Shea said. “Sophomore year was a good year.”

The Cardinals would lose in regionals, but were prepared to come back strong in the 2019-20 campaign.

“Last year was definitely the best year of my high school career,” Shea said. “We played amazing as a team and I knew that I needed to be the leader of the team, score when they needed me to score, play defense and rebound the ball.”

Shea put up multiple 20-plus point efforts throughout her junior season and was named an all-state player. Perhaps the only downfall of the campaign was having it abruptly stopped before the Cardinals could make a state run.

“I think we would have made it pretty far,” Shea said. “It was just like a piece of me was ripped out. It was awful that it was over and I remember just bawling my eyes out. We were just playing so well as a team and knew that we could’ve made a run.”

The Michigan Center senior continued to work on her game throughout the summer, but the uncertainty of the winter high school basketball season remained. With dates continually getting shuffled and pushed back, that uncertainty continued to mount.

“It was frustrating when things would get canceled or pushed back because I just wanted to play again and play one more time for my school, community and team.”

The Cardinals did eventually end up getting a season this winter, and although it was short, Shea and her team were grateful to be able to play. The forward continued to put her skills on full display during her senior year, and also achieved one of the best accomplishments in her basketball career when she scored her 1,000th point.

“I’m just glad that we got to play together and it was a fun season,” Shea said. “Scoring my 1,000th point was a really great moment in my life and I will never forget it. They announced that I got it and my whole home crowd stood up and cheered for me. It was definitely a memorable moment and I’m grateful for everyone who was at that game. It made the loss against Grass Lake feel a little better.”

With her basketball season wrapped up, Shea will conclude her high school athletic career on the soccer field this spring. Throughout high school, the 18-year-old has spent plenty of time on the pitch and has also played volleyball for the Cardinals, becoming an all-conference player in both sports.

“I really enjoyed volleyball and it taught me a lot of things about teamwork and commitment,” Shea said. “I was really sad knowing I wouldn’t play volleyball again after my last game. Soccer has been really fun and I’ve enjoyed playing it. I’ll definitely miss playing that sport, too, but hopefully we have a good season this spring.”

Basketball will soon become her sole athletic focus, but Shea will still be busy as she plans to major in education at Wayne State while minoring in sports management. She hopes to become a teacher in the future, but also wants to stick with the sport of basketball by coaching.

Shea has left her mark at Michigan Center in many ways, and now it is time for her to do the same at Wayne State.

“I’m super excited to go there,” she said. “I think I will fit in and have an important role on the team. I definitely want to be the best I can be and be effective when I’m on the court.”