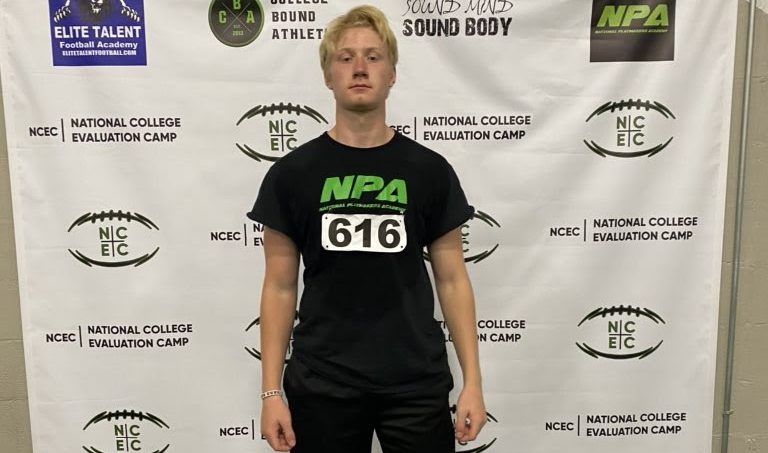 THOMPSON’S STATION, Tenn. (BVM) — For high school athletes, each year is critical towards reaching the goal of playing at the collegiate level. With the COVID-19 pandemic, many kids found themselves having to miss out on an entire season of sports. For Ty Lockwood and his family, this was not an option.

The 6-foot-5, 225 lb. tight end from the suburbs of Chicago did not want to take this risk, so he and his family decided to move to a less-restricted state in order for Ty to play his sophomore year.

“We didn’t want to miss a football season,” Lockwood said. “We can’t afford to do that right now.”

The family fell in love with the Volunteer State on a visit during the quarantine period, ultimately leading to their summer move to Tennessee. Lockwood would move to Thompson’s Station, Tenn., about 30 minutes south of Nashville, to suit up for Independence High School in the fall of 2020.

This move epitomizes the impact of football on Lockwood’s life. The son of an athletic director, Lockwood got introduced to sports at a young age.

“Growing up I was always in the gym and always out with my friends playing football,” Lockwood said. “Instead of cartoons, I’d be watching SportsCenter.”

This passion and dedication that Lockwood has always possessed for football put him ahead of the curve compared to most kids, allowing him to be a crucial offensive weapon on his new team as a sophomore.

Lockwood finished the 2020 season with 43 catches, 606 receiving yards and three touchdowns, guiding the Eagles to a 7-3 record and a 49-14 playoff win against LaVergne High School.

Throughout his breakout season, Lockwood started to gain the attention of the biggest powerhouses in college football.

“It’s pretty crazy,” Lockwood said. “All of these big schools that I’ve watched my entire life are starting to take notice and show some interest.”

A two-sport athlete, Lockwood decided to give up basketball as he received football offers from big-name schools such as Ole Miss and Tennessee, allowing him to solely focus on his future on the gridiron.

“I was thinking maybe this football thing was it,” Lockwood said. “This might be the plan for the rest of high school and probably my life.”

One of Lockwood’s biggest thrills over the past few months was finding out that he was a four-star on 247Sports’ initial rankings for the 2023 recruiting class.

“It was out of nowhere,” Lockwood said. “I was just looking on Twitter and saw that I popped up in the rankings. I’ve been wanting to get on that for a while now.”

Blessed to be rated as a 4⭐️ by @247Sports 🙌 pic.twitter.com/KKjYHMACWJ

247Sports has Lockwood listed as the fifth-best tight end in the country and the second-best player in the state for the 2023 class.

One aspect of Lockwood’s game that has him so highly ranked is his ability to be a safety net for his quarterback.

“I’m a good outlet for my QB if he’s ever in trouble,” Lockwood said. “He’ll have at least one guy open.”

One of the biggest elements of preparation for Lockwood comes in the film room . This is why he studies NFL tight ends such as Rob Gronkowski, George Kittle and Travis Kelce to help shape his game.

“They’re the best of the best,” Lockwood said. “They’re the peak of the new era of tight ends. I want to be just like those guys because they’re succeeding at the highest level.”

One thing that Lockwood will rely on to help him get to the level of those three Pro Bowlers is his rigorous work ethic.

“I make sure I keep myself at a high standard,” Lockwood said. “Even if nobody is looking, I’m doing the best I could possibly be doing.”

Despite only being at Independence High School for one year, Lockwood has already developed a great bond with his teammates and it’s his biggest priority to help lead them to a state championship for his Junior season in 2021.

“The biggest thing for me is team,” Lockwood said. “You can have good athletes, but if you’re not good as a team, you’re not going anywhere. High school football is a crazy thing and being able to experience it with your guys and your brothers is pretty great.