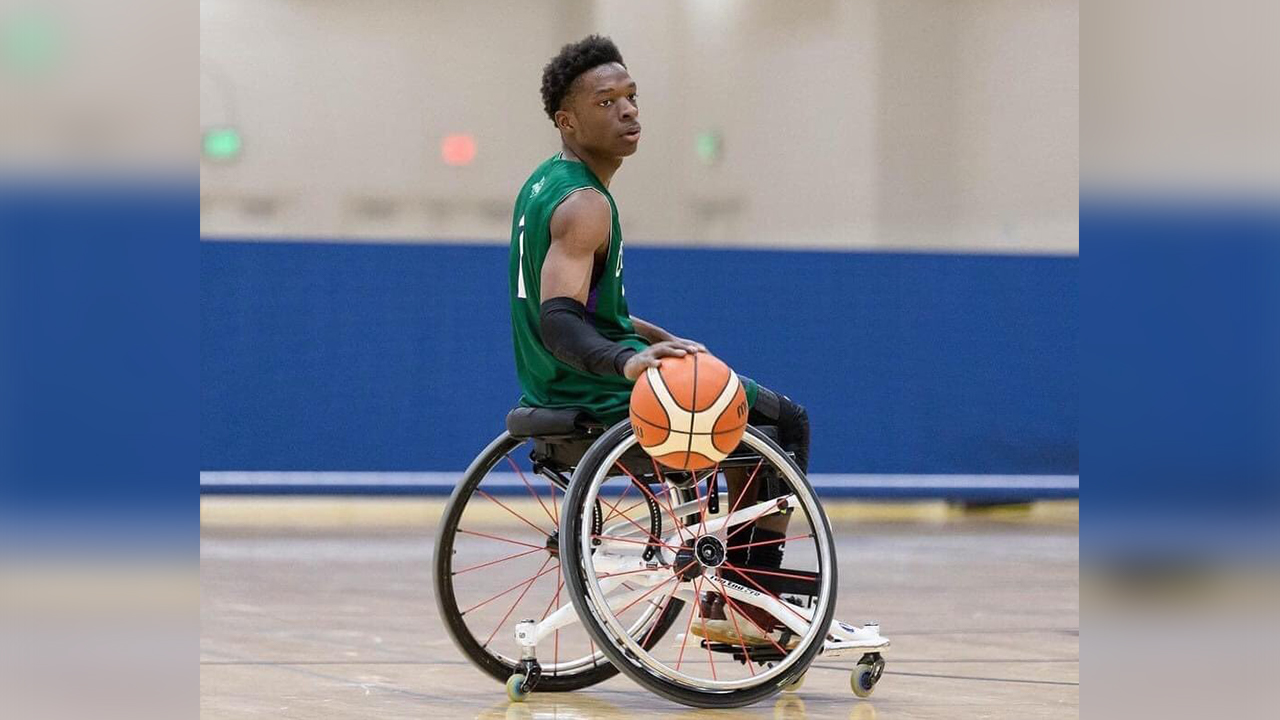 Despite being born deaf and with cerebral palsy, Louisville native Kerwin Haake will still play college sports as he signed to join the University of Arizona men’s wheelchair basketball team where he will begin playing this fall. (Courtesy: Mike Haake)

LOUISVILLE, Ky. (BVM) — Growing up, it didn’t seem like Kerwin Haake would have much of a chance playing in sports, let alone excelling in them. Born with cerebral palsy and deaf in his native country of Haiti, it seemed that athletics were the furthest thing from what Haake would do with his life.

At age 5, Kerwin was adopted by Mike and Rebecca Haake of Louisville who met the boy during a mission trip to the country. Though it would be a struggle early on given his disabilities, Kerwin grew up playing sports, such as baseball and flag football, even if his disability kept him from excelling in athletics.

“I played some baseball for a long time when I was a kid and then as I got older, I played a little bit of flag football,” Kerwin said using sign language that was translated by his dad, “I just loved playing sports.”

As a deaf student, Kerwin was enrolled in the Kentucky School of the Deaf where he was introduced to the sport that would change his life: basketball.

“It changed to basketball in middle school,” Kerwin said. “I love basketball. … I played all three of those sports, but basketball is my favorite.”

Kerwin was obsessed with basketball from the moment he put his eyes on it, but there was a problem. Due to his cerebral palsy inhibiting his ability to run, Kerwin couldn’t play traditional basketball like other kids, instead he would play wheelchair basketball.

“I can walk, but it’s hard and I can’t run really fast, I’m pretty slow,” Kerwin said. “In seventh grade, I started playing wheelchair basketball because it’s really hard for me to be able to run back and forth, but I love to play basketball.”

However none of the schools in the Lexington area, including his future high school Henry Clay High School, had a wheelchair basketball program and there were none even close, so the Haake family did their research and found the best program they could for Kewin, the Cincinnati Dragons.

The Cincinnati Dragons have been considered one of the best wheelchair basketball programs in the country which allowed Kerwin not only to play the game he loved, but learn from the best while doing it.

“We have a really good, special program and I think it starts with the coaches,” Kerwin said. “My coach’s name is Jake Counts and he’s really good at managing the team and being able to add different plays so we’re able to work together. … Coach is just a really awesome person and always excited about wheelchair basketball. He’s passionate about the game.”

The Haake family would make the hour-and-a-half trek to Cincinnati three times a week for Kerwin to be able to play. It was not easy at the beginning as the 7th grader was forced to play on the program’s adult team as they had not drummed up enough interest to create a varsity team. Learning the new style of the game for the first time, it was difficult and a bit treacherous playing against adults who were both bigger and more experienced.

“At first, I didn’t really like it because it was kind of hard and I complained about it a lot and didn’t know how to play the right way,” Kerwin said. “It was pretty hard to play with the adults because they were too good. They would crash into me and I was a little afraid at first and sometimes I would fall out of my chair. There would be a lot of crashing into me. They were pretty aggressive.”

However, the travel and dedication paid dividends for the young athlete. As a freshman, the Dragons would create its first varsity team composed of high school athletes, giving Kerwin the opportunity to excel against people his own age. Kerwin rose through the ranks with a pretty shot from his chair propelling him to the top of the team’s pecking order.

“I continued to play and started to have some success. It’s a good fit for me. I started improving. I learned how to play the right way,” Kerwin said. “We had to learn how to communicate together which was hard because I’m deaf. We used gestures and learned a little bit of sign language for playing wheelchair basketball signs and now we continued to improve as a team and play faster and now this is the best communication we’ve had as a team this year.”

With his play, Kerwin would become the Dragons’ team captain as a senior, showing not only his efficiency in the game, but his impact on the team as a leader. Eventually, his play grabbed the attention of college scouts whose adaptive athletics teams could use a player of Kerwin’s caliber.

“Our coaches encouraged us to go to summer basketball camps with those colleges that have teams so I’ve gone to like four different camps,” Kerwin said. “I saw some of the college players play and said ‘Yeah, I can do the same thing.’ I saw those players and how strong they were and I was like ‘Wow that’s pretty cool, I think I can do that.” … My junior year some colleges started recruiting me. I was surprised how many colleges were welcoming me to their college.”

Though he received interest from six or seven different programs, Kerwin committed to the University of Arizona in December.

Our senior captain Kerwin Haake from Henry Clay HS in Lexington KY has committed to the University of Arizona to continue his education and play college wheelchair basketball for the Wildcats!! @FOX19Joe @ryanlemond @KySportsRadio @DrewFranklinKSR @ArizonaAdaptive @NWBA pic.twitter.com/vnADqUO4PR

The University of Arizona’s disability resource center has seven teams in total including both men’s and women’s wheelchair basketball, rugby, track and roadracing, golf, handcycling and tennis. The men’s wheelchair basketball team has been competing since 1974 and  plays in an average of 30 games per season which includes travelling throughout the U.S. and internationally. The team also allows for a strong base for its athletes with practices five times a week with two days a week of strength and conditioning training at the school’s adaptive fitness center.

It was this dedication to the adaptive athletes, coupled with the program having an in-house interpreter and multiple friends from other programs on the team, that played heavily in the selection process.

“We met with the athletic director there, talked with the coach and met some sign language interpreters and people that worked with deaf students and we were like ‘Wow! They have a good program for me,’” Ketwin said. “A few friends I’ve met from other teams and camps are going to be there and I talked to them and the three of them said, ‘Yeah you need to decide to go to Arizona the three of us can live together and you can get good grades here.’ The team there has really improved so I really enjoy Arizona.”

On April 10, Kerwin officially put pen to paper during a signing ceremony with the Dragons. For Kerwin, it was a special moment given how far he had come.

“I enjoyed getting to sign in Cincinnati,” Kerwin said. “I hope some of my younger teammates can follow my example and be able to play basketball in college the same as me. I’m the first one from the Dragons to sign with a college team so I’m hoping I’ll be a good example and encourage the younger Dragons that they can go to college like I am.”

Super proud of @KerwinHaake for signing with the University of Arizona today!! @NWBA @ArizonaAdaptive pic.twitter.com/PpnJAwPiXZ

Kerwin is set to join the Arizona team this fall. While he is happy to be a college athlete, Kerwin is not satisfied with just making it to college.

“I think playing at DI will be a lot of fun, a lot of hard work, but I think it’ll be my favorite,” Kerwin said. “I think maybe getting in my third and fourth year I’ll be able to play a lot. I’m a pretty good shooter, I like to distribute the ball. Maybe as I get into my second and third year I improve enough to be a starter my senior year. … The team is at a really high level so I have to work hard to be at that same level.”

Given all that he has accomplished so far in his life, he should be able to achieve whatever he wants.