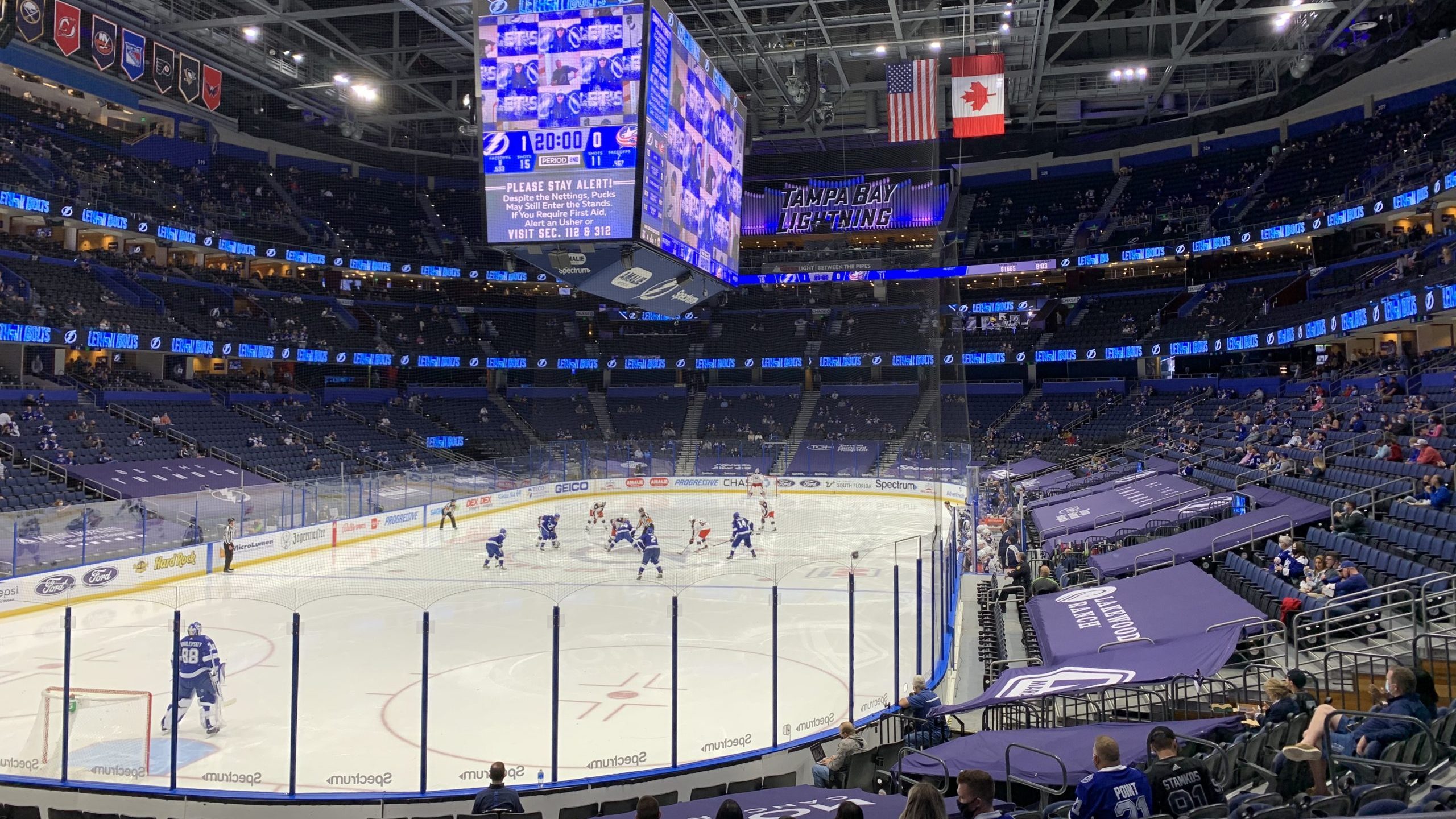 TAMPA, Fla. — On April 1, I had the privilege to attend my first Tampa Bay Lightning game at Amalie Arena since March 2020. And while it has been just over a month since that game–and attendance policies are subject to change–I felt it necessary to share my personal experience for the record.

Our corner of South Tampa is filled with die-hard sports fans, especially Tampa Bay Lightning fans, and I am sure that many have asked the question: What is it like to be back?

Let me start by saying that I was so happy to be back in the stands watching a hockey game live, and I felt completely safe. It honestly felt surreal. After a year of “two weeks to flatten the curve,” I was finally back in my favorite venue watching my favorite professional hockey team.

But, I have to admit, the experience was hardly as electric as it used to be. And I mean that both literally and figuratively. They only had one tesla generator operating in the rafters. It was like I was at a special pre-season game that only season ticket holders could attend. We were all seated based on groups and were separated by at least one row’s worth of space behind or in front of us. We also all had to wear face masks, and the ushers were very dedicated in checking their sections at every stoppage of play to ensure all fans were wearing their masks.

The face masks also pose a general annoyance at sporting events. While, yes, they are intended to keep everyone safe, they essentially muzzle the crowd. The fabric muddled our cheers, restricted oxygen, and create a subconscious desire to keep our mouths shut. Having to visit theme parks since last July for work, I knew to keep a drink on me at all times so I could have a legitimate excuse to take it off as much as I could.

Essentially, what I am trying to say is there was a forced hush on the stands in the name of safety. And to compensate, the arena pumped in pre-recorded crowd noises.

I understand why the policies are still in place. But, personally, I couldn’t help but miss seeing Amalie packed to the gills. I missed bringing the cheering and chants to a level that felt like we could make the very foundation shake. I missed watching a lightning goal cause complete strangers to hug and hi-five each other as if they were best friends.

We are a hockey town. A home game at Amalie Arena has evolved into almost a reflection of Tampa itself from our cozy South Tampa neighborhoods to as far away as Apollo Beach, Westley Chapel, and St. Pete. There is an almost unified sense of emotion centered around that patch of ice. And I cannot wait until we can all throw away these face masks and come together to fill every seat and standing-room space in that beautiful Channelside building once again.

But despite that experience, I still want to go back every chance I get. Hopefully, by the time this article gets published, I will have been to even more games because it is not just about us, the fans. It is not even just about going to support the team. Going to a game or any event has become the way we can show support to everyone working there, from the MC to the security guards, and from the men and women working the concessions stands and ushers to Kristoff up on that beautiful organ. And all of those men and women working behind the scenes to put on the show! We owe everyone at Amalie Arena and the Tampa Bay Lightning Hockey Club so much for all of the countless unforgettable experiences that have shaped our lives, and now is the time where we can actually show that gratitude and touch their lives.

I also made it a point to go home and watch other hockey games elsewhere around the league, and I saw several teams still playing to empty stands. We are so lucky that we live in a state and have a franchise whose people have worked so hard to safely get us back to this point.

So, if you have a chance to be one of those lucky people to take their seat at a Lightning game this season, TAKE IT! Get back in there, cheer our boys to victory, and show every member of that organization how grateful we are to have them back.

I may be personally fed up with the masks and the social distancing, but it is all worth it to see Coop, Stammer, Pointer, Kuch, Heddy, and all of our beloved players take the ice and win one at home with my own eyes again.

In between sips of my Coke Zero, I still had a moment where I could take in the cold air uninhibited and shout as loud as I could the anthem:

Behind that mask, I had one of the biggest smiles on my face I’ve had in a long time. It was so good to finally be home again.