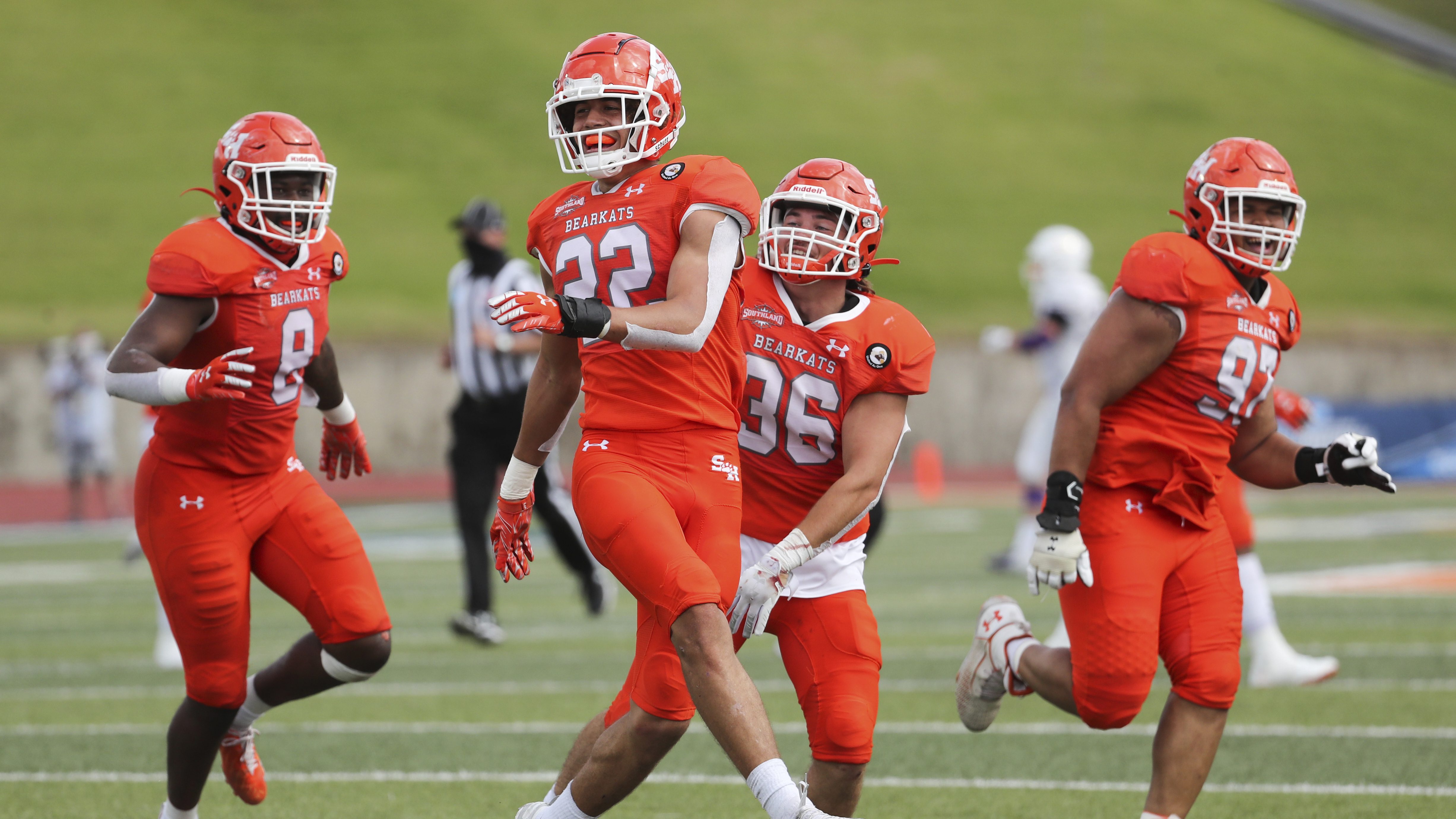 FRISCO, Texas (AP) — There are more twists to this FCS championship game than just being played in mid-May to wrap up a unique spring season.

Top-seeded South Dakota State takes on No. 2 seed Sam Houston on Sunday, guaranteeing that one of the Football Championship Subdivision playoff regulars will become a first-time champion. This is the 43rd title game in the division formerly known as I-AA.

A different Dakota is in Frisco with eight-time champion North Dakota State not there from Fargo for only the second time in 10 seasons. Sam Houston (9-0) has a shot at a perfect season while K.C. Keeler can become the winningest coach in FCS playoff history and the first to win titles at multiple schools.

Delaware grad Keeler won a championship in 2003 at his alma mater, which is what South Dakota State alumnus John Stiegelmeier is now attempting in his 24th season coaching the Jackrabbits (8-1).

For anyone who thinks an asterisk should be attached to the champion of this shortened and most unusual season for FCS, consider all it took to get to this point since the last title game in January 2020. There were constant COVID-19 tests, the uncertainty if they would play at all and now a finale only 3 ½ months before kicking off another season.

“This season’s been more draining mentally and physically than any other season in the past,” South Dakota State linebacker Logan Backhaus said.

Fellow senor linebacker Preston Tetzlaff said anyone questioning the legitimacy of this season “probably aren’t the ones playing this weekend. If they’re playing this week, they wouldn’t be saying that.”

The Jackrabbits, in their ninth consecutive playoffs, are in their first championship game. Sam Houston is in its 12th FCS playoff, and twice lost in the title game played about 200 miles from its campus in Huntsville, Texas.

Sam Houston beat North Dakota State in the quarterfinals, then the Bearkats overcame a 21-point halftime deficit in their 38-35 semifinal win over No. 3 seed James Madison, the only team other than the Bison to win an FCS title since 2011. Sam Schmid had a 69-yard TD pass and two scoring runs as they scored 28 points in a 5 1/2-minute span.

“I don’t think putting North Dakota State and James Madison in the same bracket as us is an asterisk at all,” defensive lineman Jahari Key said. “So putting an asterisk by this championship is hilarious, and also ridiculous to even say such a thing.”

Keeler got his 23rd FCS playoff victory last week to match the record mark Jim Tressell had at Youngstown State before going to Ohio State and winning an FBS national title.

“I just think it’s hilarious that they’re mentioning me with Jim Tressell,” Keeler said. “To me, it’s just recognition of all the people that have worked for me or all the players that I’ve coached.”

This is Keeler’s 27th season as a head coach, his seventh at Sam Houston. He was at Division III Rowan before coaching his alma mater from 2002-2012, leading the Fightin’ Blue Hens to their only FCS championship. Delaware also played in Frisco’s first FCS title game in 2010.

Stiegelmeier’s 174-106 record is all at South Dakota State, including 15 winning records in 17 seasons at the FCS level.

“We’re excited to be in the final. It’s been the goal of our program for a long time,” he said. “We’re not giddy excited, where you feel like you’ve accomplished the goal. … The goal is to be 1-0 in Frisco, Texas.”

“It’s really just a great combo of running backs,” Gronowski said. “Pierre’s just an elusive back who can make anyone miss. Isaiah can just basically be a bulldozer and run hard through the hole.”

Strong has 650 yards rushing while Davis, who averages 7.8 yards per carry, has 640. Gronowski has rushed for 567 yards and seven touchdowns, while also passing for 1,549 yards with 15 TDs and three interceptions.

A limited capacity crowd of about 7,500 is expected at Toyota Stadium, the 20,000-seat home of MLS team FC Dallas where the FCS championship game is set to be played through at least 2025. … There are 24 players from South Dakota on the Jackrabbits roster. “I love my home state, and it’s a privilege to be able to represent them at the highest level possible in Division I football,” senior center Wes Genant said.