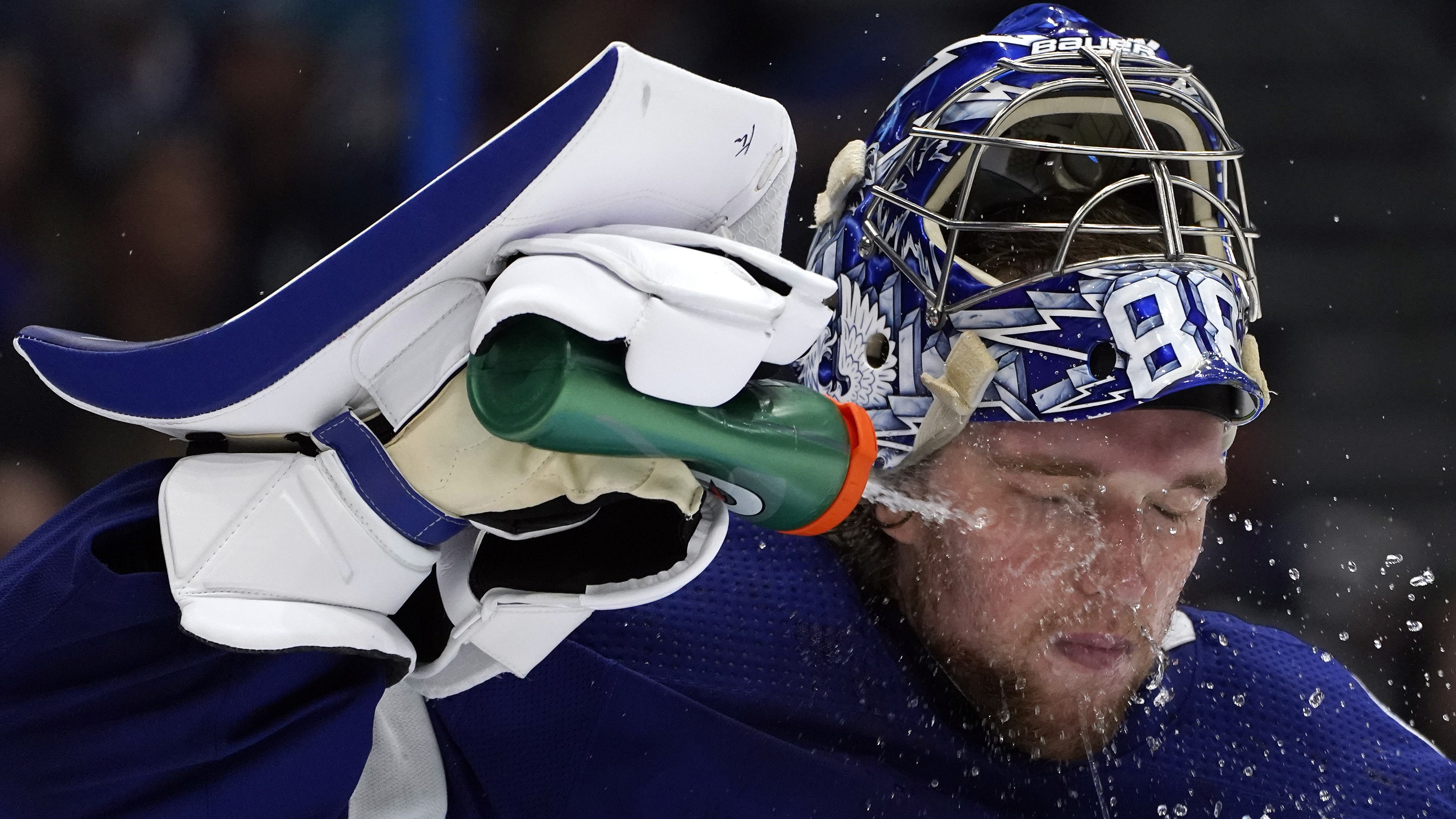 NEW YORK (AP) — Semyon Varlamov is the wily veteran, coming off a season in which he set career bests in goals-against average, save percentage and shutouts for the New York Islanders.

Andrei Vasilevskiy is the league’s wins leader over the last four years for the Tampa Bay Lightning, coming off a Stanley Cup championship season and vying for his second Vezina Trophy in three years.

The two countrymen were teammates, too, a long way from the NHL playoffs.

“He’s been the best goalie in the NHL last couple of years,” Varlamov said of his counterpart. “He’s outstanding.”

The two were on Russia’s World Cup of Hockey squad in 2016, playing behind starter Sergei Bobrovsky. Last September, they squared off when the Islanders and Lightning met in the Eastern Conference finals, which Tampa Bay won in six games on the way to earning its first Stanley Cup.

The Russian netminders are part of a rennaisance of sorts, one that was featured in last year’s postseason. This year, the showdown could be the deciding factor in the team’s Stanley Cup semifinal series, which is tied 1-1 heading into Game 3 on Thursday night.

“I like this kid, but now we play against each other,” the 33-year-old Varlamov said. “He’s a very big goalie, very athletic, and won a Cup last year, won the Vezina Trophy. I can say a lot of great things about him.”

The 26-year-old Vasilevskiy has been the unquestioned starter for the Lightning since they traded Ben Bishop at the deadline in February 2017. Vasilevskiy has responded by totaling a league-best 149 wins over the last four seasons. He also holds franchise records for career wins (190), shutouts (26), games (302), single-season marks for victories (44) and shutouts (eight) .

Varlamov has been part of a tandem in New York the last two years after signing with the Islanders for four years, $20 million as a free agent. He split time with Thomas Greiss last season, starting 39 of the team’s 67 games and 19 of 22 in the playoff run. In 2021, he was paired with 25-year-old rookie Ilya Sorokin, a fellow Russian, and finished 19-11-4 with career-bests of a 2.04 GAA, .929 save percentage and seven shutouts.

Islanders coach Barry Trotz has credited Varlamov for being “low maintenance” and quickly shaking off a bad play or bad night.

“Varly is one of those guys that (when he) has a bad game, you want to throw him in there right away because you know he’s going to come back with a really good game,” he said.

Varlamov missed the opener in the first round against Pittsburgh due to an injury and Sorokin won the game. Varlamov returned for the next two games, which the Islanders lost, so Trotz turned back to Sorokin. who was unbeatable as the Islanders won three straight to advance.

After Sorokin lost the opener of the second round to Boston, Trotz went back to Varlamov, citing his strong career record against the Bruins, and the Islanders advanced again.

“In our minds, Varly is one of the best goalies in the league,” Islanders forward Jordan Eberle said.

In this series, Varlamov has stopped 53 of 58 shots, leaving Game 2 briefly after getting run into. Sorokin stopped all six shots he faced while filling in.

Vasilevskiy also has 53 saves on 57 shots, and has helped the Lightning avoid consecutive losses in the last two postseasons while they improved to 11-0 in games following a defeat.

In each of their first two series, the Islanders lost Game 3 at home to fall into a 2-1 series deficit before rebounding with three straight victories to advance.

“We just have to focus in on the next shift,” Trotz said. “There’s no magic formula to do that. I think we’ve approached every game the same way. We understand the importance of our home ice, our building. They’re going to come, we’ve got to respond. We lost the game last night and it’s our turn to respond.”