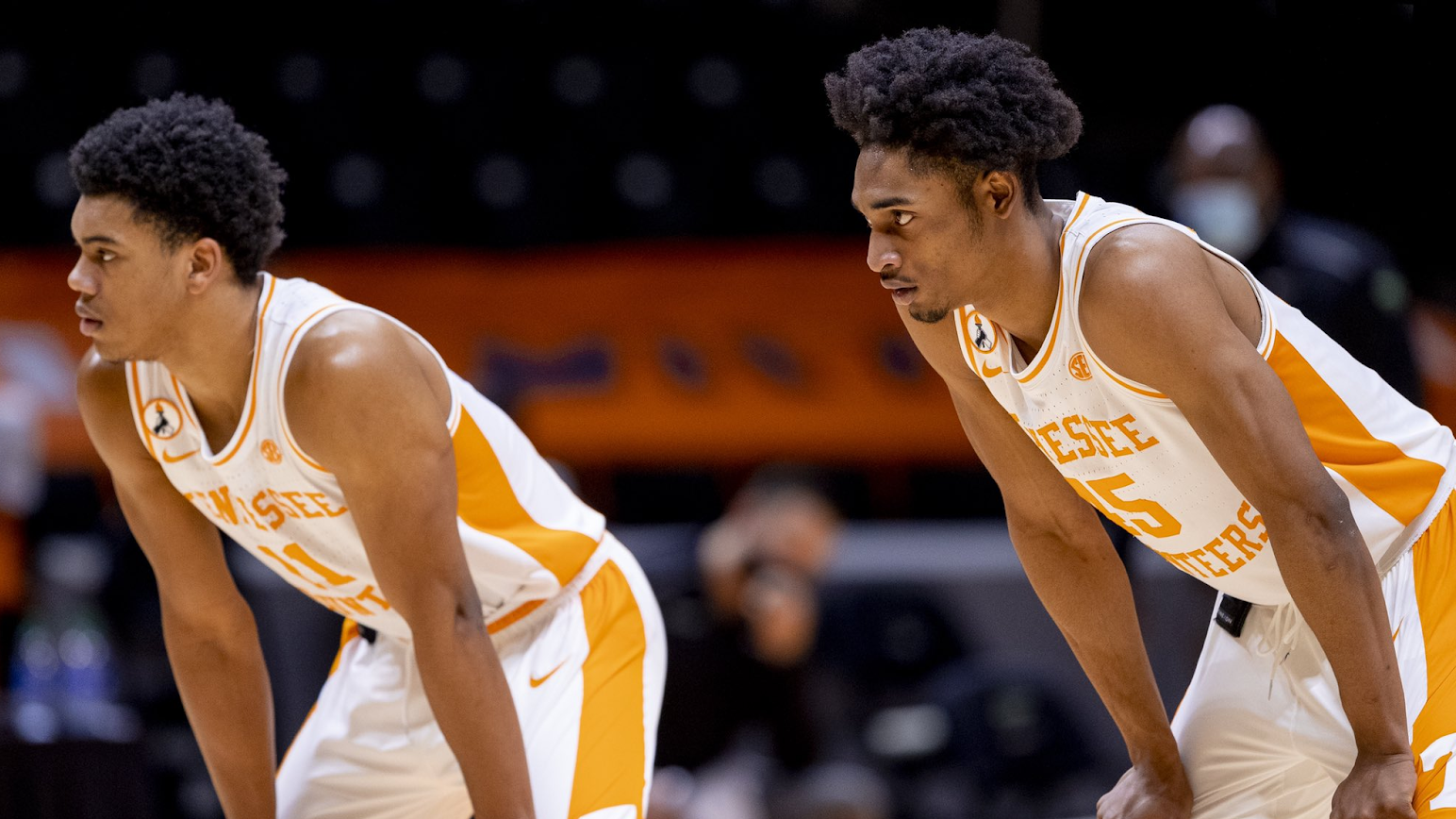 Tennessee Volunteers teammates Jaden Springer, left, and Keon Johnson, right, became the second pair of first round picks to go in the same NBA draft in program history after being selected in the 2021 NBA Draft. (Credit: Tennessee Athletics/UTsports.com)

KNOXVILLE, Tenn. (BVM) — The Tennessee Volunteers men’s basketball team made some history during the 2021 NBA Draft. During the first round, Vols freshmen Keon Johnson and Jaden Springer were picked, becoming the first Tennessee duo to be chosen in the draft’s first round since Bernard King and Ernie Grunfeld were selected in 1977. Johnson was the first to come off the board at pick No. 21 by the Los Angeles Clippers (via the New York Knicks), becoming the highest drafted Vol since Tobias Harris went 19th overall in 2011. Springer would go near the end of the round at No. 28 to the Philadelphia 76ers.

Johnson, a Shelbyville, Tenn., native and the 10th first round pick in Vols history, was a Southeastern Conference All-Freshman selection this past season after he played all 27 games for the team and finished as the second-highest scoring Tennessee player with 11.3 points per game.

“It’s a dream come true,” Johnson said during the broadcast after being selected. “I feel like all of the work I’ve put in has paid off. Now it’s time for me to take the next big step.”

In addition to his high scoring, Johnson was also one of the most important shooters for Rocky Top last year as he led the team in field goals made and field goals attempted, while shooting .449 throughout the year. Johnson’s stock would rise during the pre-draft process as well as he would set a new NBA Combine record in the vertical jump with a 48-inch leap, bringing even more eyes to the star athlete.

The Vol can get 🆙@iamkeonjohnson set a new draft combine record with a 48-inch vertical leap. pic.twitter.com/bU2eARJXYb

Though he wouldn’t have an internet-breaking moment like his former teammate, Springer would have enough tape to showcase his potential to NBA teams. Last year, Springer led the Vols in scoring with 12.3 points a game while adding 3.5 rebounds, 2.9 assists and 1.2 steals in 25 games. A bit more effective than his counterpart from beyond the arc, Springer shot an impressive .435 from 3-point range for Rocky Top.

The 76ers select Jaden Springer from Tennessee with the No. 28 pick.

He joins Keon Johnson as the second Vol to be selected in the first round in tonight's draft. pic.twitter.com/LLHS6UYKPJ

Tennessee finished the night as just one of two NCAA programs with two first round picks, joining Gonzaga which saw Jalen Suggs and Corey Kispert be selected in the opening round as well. This year’s draft also sees the number of picks coached by Tennessee head coach Rick Barnes to 29 dating to 1990 which is the sixth-most among active NCAA coaches.

With 12 NBA draft picks over the past 12 seasons, the Tennessee Vols seem to be a program on the rise in developing NBA talent. As more players such as Johnson and Springer move onto basketball’s biggest stage, expect more highly-touted players to come through Knoxville looking for their chance to make the league. For Volunteers fans, that just means more opportunities for long-term success.