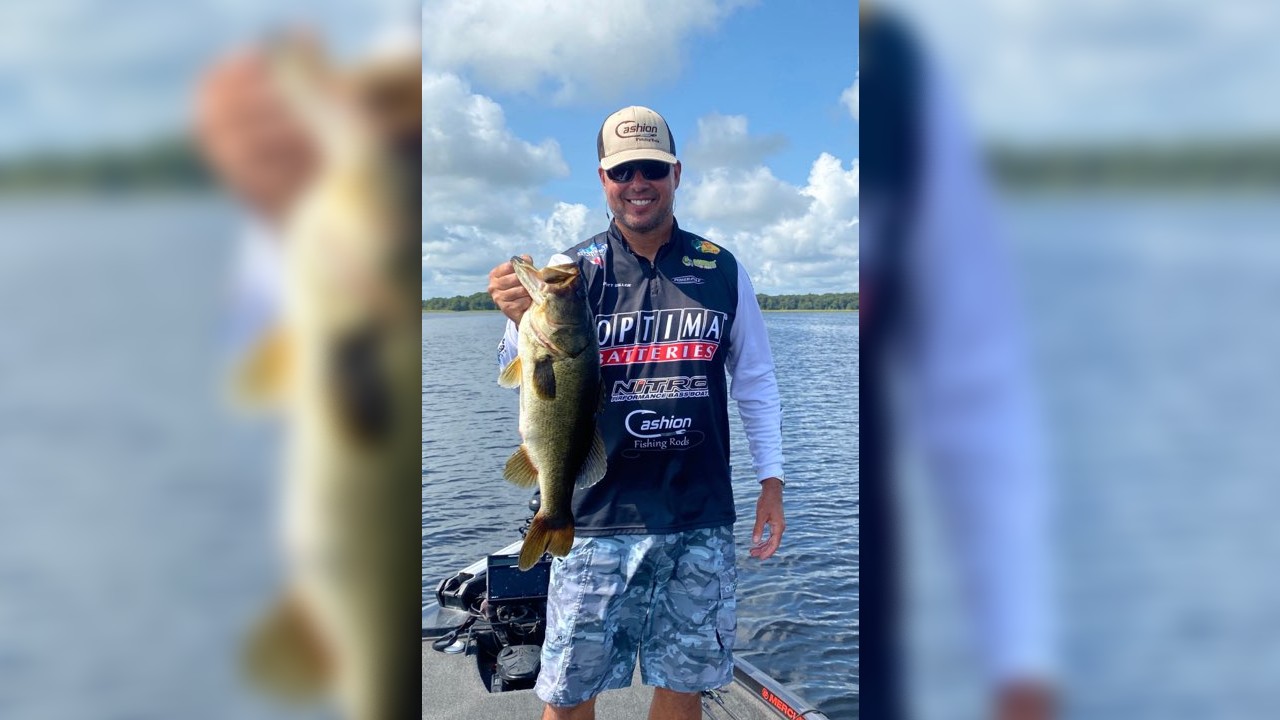 Siller was one of the first to apply for the NPFL after he heard about it in 2020. (Courtesy: Scott Siller)

MILWAUKEE (BVM) — As Scott Siller approached the weigh–in stage on the final day of the National Professional Fishing League’s Lake Winnebago event, he already knew what he was going to say on stage.

He was the first to weigh in and had had a tough week on Winnebago, but that wasn’t what concerned him as he held his bag and granddaughter on the stage. It was then that he took off his jersey to reveal a Hero Beverage shirt underneath. The company was sponsoring the final day of the event and was honoring local service members from first responders to the branches of the military.

A retired Milwaukee Police officer, Siller used his time on stage to not only quickly thank his sponsors but also thank all the service members in attendance, including some of his former partners with the Milwaukee Police Department who had come up for the final day. They were men, who with Siller, had earned the Medal of Valor from a shootout they had all been in and in honor of that Siller gifted his fishing rod to one of his partners.

“It was very special,” Siller said

The chance to thank his partners and support a cause he feels so strongly about is just one example of the benefits Siller has had from joining the NPFL. It also shows how far Siller has come since first getting into bass fishing.

Born and raised in Wyoming, Siller grew up loving to fish but never went bass fishing as a kid.

“I grew up fishing for trout in Wyoming,” Siller said

It wasn’t until he moved to Milwaukee for work that he got his first taste of bass fishing when one of his partners invited him to join a local fishing tournament that was going on at Pewaukee Lake.

“It was just cool to see all the nice boats flying across the lake and that kind of added a dimension to the whole fishing thing for me,” Siller said. “Not only just the aesthetics of a bunch of fishing boats screaming across the lake but the fact that every fish you catch means something, it’s not just take a picture and let it go.”

All it took was that first tournament to get Siller interested in fishing and to do a full dive into the bass fishing world.

“I decided at that point after that tournament that I was going to get into this tournament deal so I bought a boat, my first bass boat, and signed up for a bass club,” Siller said.

From there, Siller continued to fish locally with the club and go to any events he could. He would even take vacation days to go down to the Bass Pro Shop in Gurnee, Illinois to listen to professional anglers give seminars. He read every article, watched videos and completely immersed himself into the sport.

He became a versatile angler who could adapt to what the water system or environment was giving him. Siller continued to improve as he spent more time on the water and studying his craft.

Siller was becoming so good that a company, SysLogic, reached out to him about moving up to the professional level. They offered to help him pay for all the expenses that go with professional bass fishing and in 2013 he competed in his first Bass Masters events.

In his year as a pro, Siller competed in three events, with his highest finish being in the third event when he took 22nd. However, it wasn’t until his second year in his second tournament at Lake Champlain in Plattsburgh, New York that he made a name for himself.

“That Champlain tournament was kind of a milestone,” Siller said.

He led the event on the first two days and as they entered the final day of the tournament, it was stacking up to be a thrilling finish.

“Going into the final day they said it was one of the strongest top 12’s in the history of the Bass Masters,” Siller said. “At that point I was just sort of shell shocked at the whole deal.”

Siller finished in eighth place, but the event was a defining moment in his career. He signed a deal with Bass Pro Shops along with Nitro fishing boats. He was even able to watch his career go full circle from being one of the people in the crowd at a seminar in Gurnee to leading them himself.

“I remember back then watching these guys doing seminars, thinking how cool they were,” Siller said. “I would love to someday be able to do that and I never thought I’d be able to.”

Then in 2020, Siller retired from the Milwaukee Police Department and began hearing about a new startup fishing league called the NPFL. He filled out an application and then waited to hear back from ownership.

Siller was with fellow angler Brian Tyler fishing on Lake Kissimmee when he received a call from Brad Fuller who officially invited both of them to join the NPFL.

“It was exciting,” Siller said. “I liked the way they did it. I thought it was kind of neat that they made a formal phone call. That was just another one of those little things about the NPFL that was really appealing and made you feel like this was a good decision before you started.”

Although his first season in the league has not been a success out on the water he has enjoyed his time with the NPFL and as he enters the final tournament of the season he’s excited about his future.

Looking to build upon the relationship he created with Hero Beverage in Oshkosh, Siller wants to combine his love for angling with his support for service members. He wants to give back to those who helped him get to where he is, because if it hadn’t been for the people he worked with in the police department, he never would have been able to attend professional bass fishing tournaments while working fulltime as a police officer.

“I was really fortunate,” Siller said. “I would say about 70% of the police force would not be able to do what I did.”

With all of this in mind as he prepares for Grand Lake, Siller is ready to finish the season on a high note.