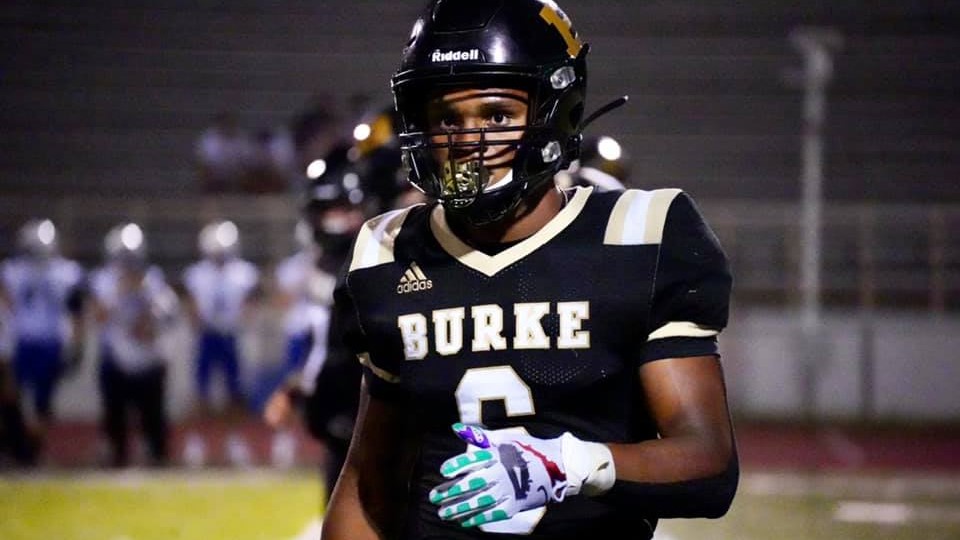 Devon Jackson is the top-ranked recruit in the state of Nebraska and among the top linebackers in the country for the Class of 2022. (Credit: Burke Football/Facebook)

OMAHA, Neb. (BVM) — Devon Jackson hasn’t played a lot of high school football, but the Omaha Burke senior has shown enough to gain the attention of the many Power 5 college football programs that have offered him a scholarship.

Jackson, rated as a four-star recruit by ESPN, Rivals and 247Sports, didn’t play at all as a junior after Omaha Public Schools canceled the 2020 season last fall because of the COVID-19 pandemic, and his time on the field was limited — in part due to injury — during his sophomore season. He did, however, put enough on film as a sophomore to make his recruiting stock soar.

“Sophomore year he made some really special plays,” Burke head football coach Paul Limongi said. “He made a highlight tape and that was it. It showed his speed and explosiveness, big hits, and the fact that he has great track speed and great size and strength, that’s really helped him.”

Jackson’s speed sets him apart not only on the football field but on the track as well. He used it to capture Class A state titles in both the 100 (10.57 seconds) and 200 (21.63) meters this past spring. Now in midst of his final high school football season, the 6-foot-2, 207-pound linebacker is using that speed and explosiveness to show why he’s worth all of the attention he’s receiving as a highly-touted college football prospect.

“I want to prove, not just to coaches (who) recruited me, not even to my coaches, not even to the state, but to myself that I’m one of the best linebackers in the country,” Jackson said.

ESPN has Jackson rated as the No. 10 outside linebacker in the country for the Class of 2022 and he’s ranked No. 105 among their top 300 recruits overall. He has 20 Power 5 offers, which speaks to the potential that programs see in the Burke senior, and Limongi believes he can make good on that potential if he can stay on the field and play with consistency.

“When he’s willing, he really packs a punch,” Limongi said. “He’s got a lot of gifted, talented, characteristics. He’s got to stay healthy and take care of his body. He just has to put the pedal to the metal the entire game, just get after it, and be consistently dominant which he can be. … He absolutely has the ability to reach his potential and do really great things in college.”

Which college that will be is not yet known, but a decision isn’t too far off. Earlier this year, Jackson narrowed his choices down to a top-five of Arizona State, Texas A&M, Miami, Notre Dame and Oklahoma, but Oregon came in with an offer last month and Jackson said the Ducks have now become a front-runner along with the Sun Devils. He plans to take an official visit to Oregon on Sept. 25 when the Ducks host Arizona and he’ll visit Arizona State when the Sun Devils take on Stanford on Oct. 8.

Jackson’s plan is to commit to a college before the playoffs begin for the Bulldogs later this fall. In the meantime, he’ll be trying to help make sure Burke reaches those playoffs while also preparing to become the best player he can be at the next level, at whichever linebacker position his future team needs.

“That’s why I work on my game on defense to be that all-around defensive player,” Jackson said. “I feel like (I can play) wherever the coaches want to put me to get me on the field the fastest.”