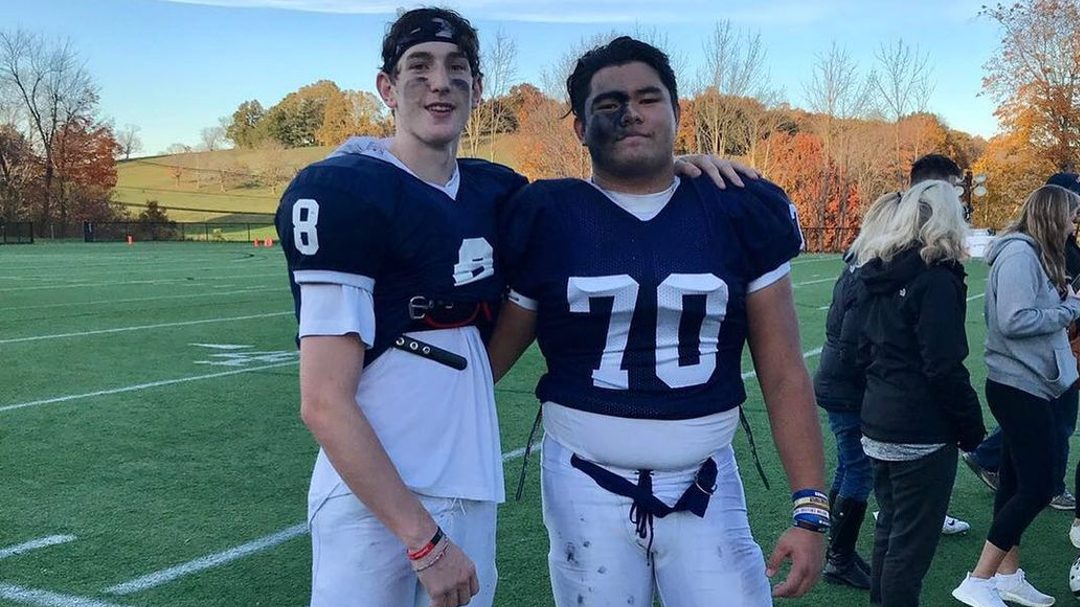 Matt Ragan, left, looks to cap off his senior year on a high note before going off to play football at Boston College. (Courtesy: @matty_1ce8/Instagram)

GROTON, Mass. (BVM) — After missing out on his junior season, Lawrence Academy’s Matt Ragan has enjoyed all that comes with getting back on the football field. The senior captain has made sure to take it all in during the Spartans’ perfect start in 2021.

“I think I speak for a lot of the upperclassmen, it was tough,” Ragan said of the layoff. “It’s been like two years since we played our last game. It’s [been] just a lot of workouts and staying active and just trying the best we could to stay involved with football.”

Staying active has been crucial for the 6-foot-5, 225-pound tight end who has been a mainstay on game day for the Spartans since his freshman season. As the team comes off a down year in 2019, it’s been important for Ragan to show his leadership abilities as Lawrence Academy sets its sights on late–season action.

“From day one, as soon as Matt stepped on campus he was able to show his leadership skills,” Spartans head coach Jason Swepson said. “He’s vocal, he’s a hard worker. [He’s} probably the hardest worker on the team. His commitment is unmatched and he’s a great teammate. He’s very supportive with all that. That earned him being a captain this year.”

Even with the vacant year of football, Ragan would still find a way to garner attention during the recruiting process. The No. 5 player in the state of Massachusetts received interest from the likes of Michigan State, Buffalo and Duke before committing to his hometown team of Boston College nearly a year ago.

“I just had a really good relationship with the coaches talking to them,” Matt said of his commitment to Boston College. “It was definitely a bonus just being at home, close to my family and I had a great relationship. That team is going in the right direction and I’m just excited about the program.”

The commitment announcement was a long time coming for Ragan who has close ties to the Eagles program. Ragan’s father, John, and brother, Sean, both donned the maroon and gold, with Sean graduating from the school in 2020. His Lawrence Academy head coach even suited up with his father when the two played for Boston College in the late 80’s and early 90’s.

With many familiar ties, it’s been nice for Matt to lean on the advice of his brother when it comes to the grind of changing levels. The two, however, will not play for the same coaching staff with Eagles head coach Jeff Halfey taking over the program in recent years.

“He had a different coaching staff, so he was just telling me that he was excited for me,” Matt said. “Obviously, it’s a step up from high school and it’s a big commitment but he talked well of it so I’m super excited.”

With the next level still in the future, Ragan continues to be focused on his team’s success in the Independent School League (ISL). Fresh off a 2-0 record, Ragan and the Spartans have jumped out to a quick start and will look to carry their momentum deep into the season.

With the hot start, Matt and his fellow seniors are looking forward to capping off their final season on a high note.