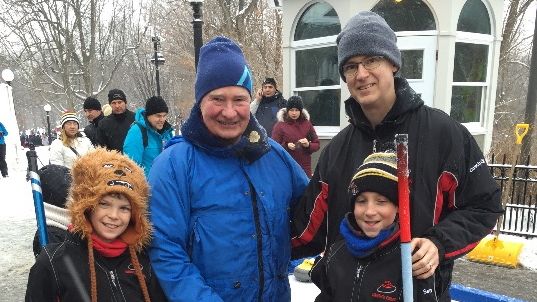 OTTAWA, Ontario – Curling and Canada is a perfect combination. Team Canada have more titles than any other nation in the world when it comes to world curling championships and some of the greatest names in the sport came from the North American country.

In 2019, Curling Canada reported more people were curling in the country and approximately 2 million people were involved with it. This statistic shows many people tend to fall in love with the sport and with Chris Innes, Manotick Curling Center’s youth coordinator, it was no different.

Innes said he started curling in 2002, as the sport was a great source of physical exercise, and it was also important for the social aspect. The Mount Allison University’s alumni explained he tried to curl during his college years, but it did not go as he was expecting.

“We were a group of university students with no instructors. We were told to strap a slider to one foot and step out onto the ice,” he said. “The next thing I remember is that I was lying on the ice.”

Since 2004, he has been a voluntary curling instructor at the Manotick Curling Center and his family played a major role in his decision to become a coach. He explained his son joined a curling club and when he came back from his first curling lesson, her wife told Innes they only had a small number of coaches to teach the sport and so she signed him up.

After all these years, Innes said he has always enjoyed teaching others and it is a pleasure for him to see teenagers and adults learn something new and excel.

During his career as a coach, he has collected important awards such as Grassroots Coach of the Year 2012 and he also became a member of the Manotick Curling Center Wall of Honour, as he was inducted in 2019.

Innes has also been responsible for the annual curling demonstration for the Governor General as part of the Governor General’s Annual Winter Celebration since 2014 and, in 2019, he took over the coordination of the Ottawa Valley Curling Association’s annual Little Rock Championship.

In 2020, he said the COVID pandemic had a devastating impact on his volunteer work at the curling center as the youth curling program had to stop its activities in March. But, according to him, the plan is to restart the activities by the end of this year, something Innes is looking forward to.

“We hope to restart both groups in November, with a modified program for the younger age group (7-12 years old),” he explained.

Today, Innes’s routine is different from when he started to curl in 2002 and it has impacted his relationship with the sport.

He said he had to stop curling a few years because he just did not have the time after spending every Sunday at the club teaching as well as his other volunteers activities . He is also the Group Commissioner for Scouting in Barrhaven and the Head Miller for Watson’s Mill, an 1860 Grist Mill.

Nearly two decades after his decision to become a curling instructor, Innes had the opportunity to teach some of the values he considers as important to his players and the feedback he receives from others has always been positive.

“I have three rules that I live by, and I follow these with everything I do. The rules are have fun, show respect and be safe,” he said. “I love to hear when other clubs recognize the youth I have taught for showing good sportsmanship.”