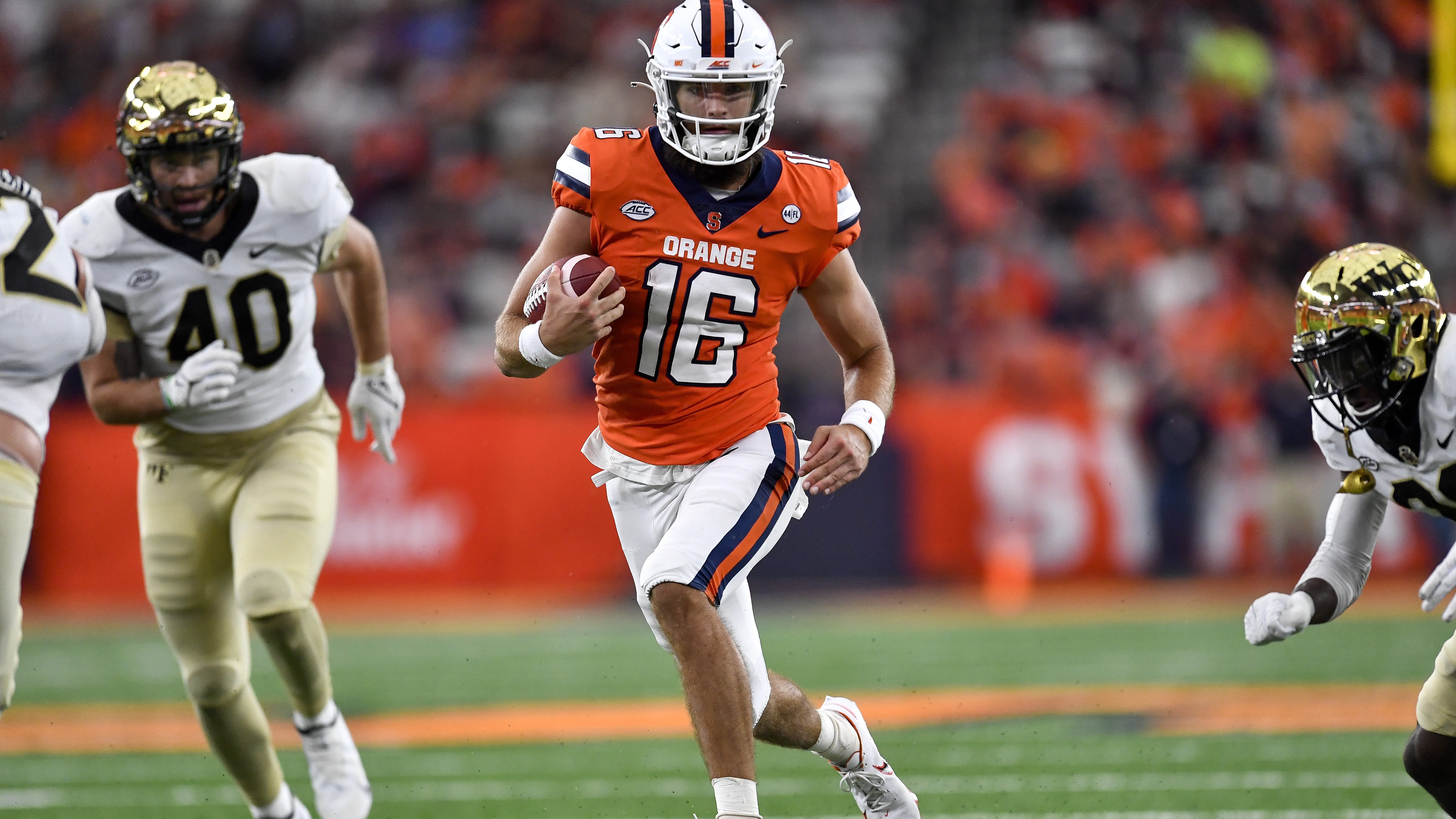 Syracuse quarterback Garrett Shrader (16) runs with the ball during the first half of an NCAA college football game against Wake Forest in Syracuse, N.Y., Saturday, Oct. 9, 2021. (AP Photo/Adrian Kraus)

SYRACUSE, N.Y. (AP) — Having tripled last season’s win total halfway through 2021, the Syracuse Orange have helped their fans largely forget the noncompetitive squad that lost 10 games in the pandemic-plagued 2020 campaign.

And that’s good for the psyche.

Syracuse (3-3, 0-2 Atlantic Coast Conference) has played three straight games decided on the final play, including an overtime setback last week to then-No. 19 Wake Forest. Now they host Clemson (3-2, 2-1) on Friday night. The game offers a chance for a signature victory for the Orange, even though the Tigers have struggled and dropped out of the AP Top 25. Syracuse is a 13.5-point underdog, according to FanDuel Sportsbook.

“We know Clemson is still one of the most talented teams in the conference regardless of their record, and they’ve lost to two really good teams,” Williams said. “We don’t really try to emphasize any game over another, but we also have to have the realization that it’s there and just seeing the opportunity that we have ahead.”

Clemson was ranked in the top three for seven of its eight previous matchups with the Orange. Four years ago, Syracuse pulled off one of the program’s biggest upsets when it beat the No. 2 Tigers 27-24 in the Carrier Dome.

The Tigers, fresh from a bye week, are aiming to revert to the form they’re accustomed to on offense. Clemson has scored just 57 points combined against four Power Five opponents after averaging more than 44 points a game the past three seasons.

“We’re right there,” Clemson quarterback DJ Uiagalelei said. “Just little stuff (we’re not doing) that could take us to the next level. We just shoot ourselves in the foot.”

Clemson plays its first game as an unranked team since November 2014. Tigers linebacker James Skalski can’t fully wrap his head around that, frustrated the team hasn’t gotten more respect for how strongly it has played despite its record. Clemson hadn’t lost two games in September in seven seasons and must jump No. 16 Wake Forest and No. 22 North Carolina State, both undefeated in ACC play, if it hopes to try for a seventh straight league championship. “Our two losses are against the No. 1 team in the country (Georgia) at a neutral site, 10-3, and in double overtime at a Top 25 team (North Carolina State),” Skalski said. “That’s kind of frustrating on my part. Almost feel a little disrespected. I get it.”

In the Orange’s two conference losses, quarterback Garrett Shrader and tailback Sean Tucker have rushed for all but 23 yards of an impressive team total of 593. The two averaged 6 yards on 95 carries and accounted for nine TDs against Florida State and Wake Forest. Tucker has 791 yards rushing on 133 carries, behind only Joe Morris in Orange annals at this point of the season. Shrader is just the third Syracuse quarterback since 1979 to run for over 100 yards in consecutive games. The duo will have a little extra incentive — Syracuse will be honoring the late Floyd Little, one of its greatest tailbacks. Clemson is allowing just over 100 yards rushing per game.

NAILBITERS NOT SO BAD

Being in tight games is stressful but can be rewarding in the long run.

Four of Clemson’s games have been decided by eight points or fewer and the Tigers are 2-2.

About 90 minutes after Clemson defeated Boston College 19-13 on Oct. 2, Uiagalelei returned to the field at Memorial Stadium to get in some extra work and correct mistakes he made against the Eagles. Uiagalelei, a sophomore, is in his first season starting in place of No. 1 draft pick Trevor Lawrence. The Tigers’ offense has struggled early to find its rhythm, averaging fewer than 15 points a game against its four Power Five opponents this season. So there was Uiagalelei in the mostly empty arena, refining his footwork and timing. “I’ve done that before in high school, college,” Uiagalelei said. “It’s the first time people have seen it.”