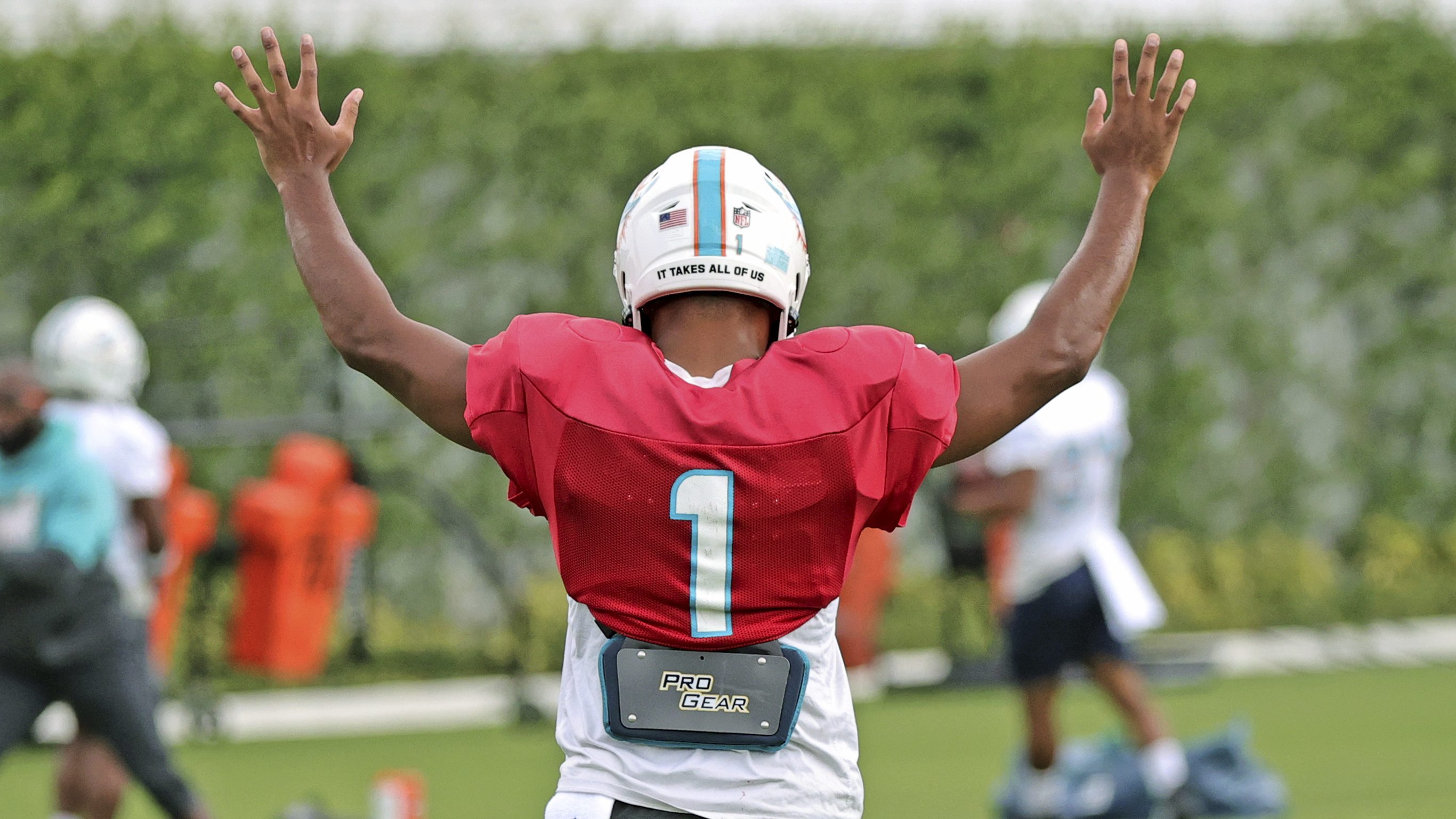 Miami Dolphins quarterback Tua Tagovailoa (1) reacts after a play during practice at Baptist Health Training Complex in Hard Rock Stadium on Wednesday, October 13, 2021 in Miami Gardens, Florida, in preparation for their game against the Jacksonville Jaguars at Tottenham Hotspur Stadium in London on Sunday, October 17.(David Santiago/Miami Herald via AP)

JACKSONVILLE, Fla. (AP) — Miami and Jacksonville have two of the NFL’s longest current losing streaks. The Dolphins have dropped four in a row by a combined 76 points. The Jaguars’ skid stands at 20, the longest in the league in nearly five decades and six shy of the record.

The teams went to great lengths this week – literally – in hopes of getting a victory.

The Dolphins (1-4) and Jaguars (0-5), who both reside in the same state about a five-hour drive apart, traveled 4,500 miles (7,242 kilometers) to play in London. They will meet Sunday at Tottenham Hotspur Stadium, both desperate to end slides.

“We need a win,” Jaguars offensive tackle Jawaan Taylor said. “We’ve worked hard for a win, every day out here in the hot sun. We continue to believe in each other, and it’s time to make it happen.”

Most would argue Jacksonville is long overdue. Coach Urban Meyer insists his team is making progress despite losing four of five games this season by double digits. Nonetheless, the Jaguars are closing in on Tampa Bay’s dubious NFL record. The expansion Buccaneers hold the league mark for consecutive losses at 26, setting it in their second season in 1977.

“The combination, I see it growing and I see a team growing. … Belief and work ethic are the secret sauce to winning.”

A dash of Trevor Lawrence might help, too. The overall No. 1 pick in this year’s NFL draft is coming off his two best games, throwing for 473 yards, rushing for 64 more and accounting for three touchdowns and just one turnover.

“I mean he really has been jumping off the tape as of late,” Jaguars linebacker Damien Wilson said. “I kind of knew it would be a matter of experience. The more games he gets under his belt, the better he is going to get. His ceiling is very, very high.”

The Dolphins feel the same way about Tua Tagovailoa, who hurt his ribs early in a Week 2 loss and spent the last three games on injured reserve. He’s expected to return against Jacksonville.

“This is really just, ‘Let’s see how this goes at practice. Can he make the throws? Can he roll to his left, roll to his right, step up in the pocket?’” Dolphins coach Brian Flores said. “The one thing we won’t know is taking a hit. We won’t know that until the game, but we’ll try to do as much as we can to get a feel for what that will look like or what that will feel like without having a setback, obviously.

The Dolphins are the only team in the NFL to be ranked 30th or worse in the four primary offensive categories: yards, passing yards, rushing yards and points. The New York Jets are 29th in passing, missing joining the Dolphins in that dubious club by 8 yards. The Jets almost achieved the feat for a full season in 2019, again finishing 29th in passing, 3 yards ahead of the 30th-ranked Indianapolis Colts that season.

It’s been more than seven years since a rookie quarterback threw a touchdown pass in London. Derek Carr of the Raiders was the last to accomplish the feat in 2014, at Wembley Stadium.

Jacksonville’s Blake Bortles (2014), Cleveland’s Deshone Kizer (2017), Jacksonville’s Gardner Minshew (2019) and Zach Wilson of the New York Jets (last week) all failed to get one in the end zone since in London. Lawrence gets the next shot. He also could become the first rookie QB with a pair of TD passes across the pond.

“I think I’m just playing a lot smarter ball,” Lawrence said. “I feel like I’m getting better every week and just trusting that that’s going to put us in situations to win games down the road.”

The Dolphins haven’t had a big problem starting games. They’re winning first quarters this season by a combined score of 34-23, the sixth-best differential in the league. The problem is the rest of the games. They have been outscored 44-3 in the second quarter, 27-14 in the third, 54-25 in the fourth and 6-3 in overtime. Add it all up, and that’s a difference of 131-45 after the opening 15 minutes of every contest. That’s by far the worst differential in the NFL this season after the first quarter.