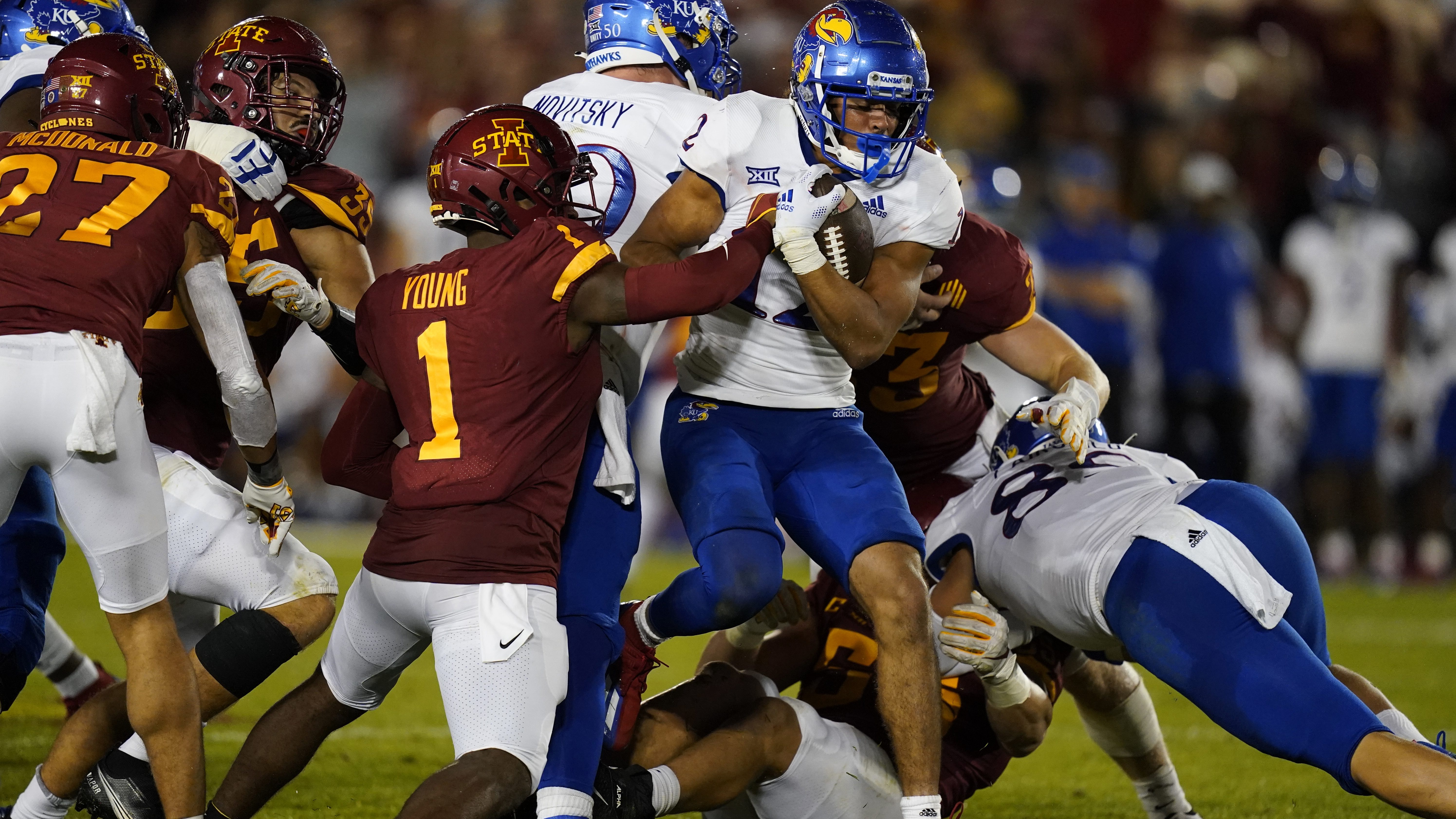 Kansas' Torry Locklin (12) is tackled by Iowa State defensive back Isheem Young (1) during the first half of an NCAA college football game, Saturday, Oct. 2, 2021, in Ames, Iowa. (AP Photo/Charlie Neibergall)

LAWRENCE, Kan. (AP) — Kansas has plenty of reason to remember the last trip Texas Tech made to Memorial Stadium.

It was the last time the Jayhawks won a Big 12 game.

That was nearly two years ago, when Jayhawks coach Lance Leipold was still running the show at Buffalo and quarterback Jason Bean was under center at North Texas. Matt Wells was in his first season leading the Red Raiders, trying to instill in his program all the things he learned during a successful run at Utah State.

One thing is exactly the same, though, as the two teams prepare to meet again Saturday in Lawrence: Kansas and Texas Tech are still in the midst of massive rebuilding efforts.

“We see guys getting better weekly. We want to keep hitting those benchmarks,” said Leipold, whose Jayhawks (1-4, 0-2 Big 12) were off last week following four straight lopsided defeats. “We’ll evaluate where we’re at, where we’ll need to improve, how we line up against other people just physically and continue to do that. It’s an everyday thing in our program.”

The same is true at Texas Tech (4-2, 1-2), which appears to be a bit further ahead in its reconstruction. The Red Raiders at least have a conference win over West Virginia on their resume.

While the next step for Kansas is to pick up a Big 12 win, the next for the Red Raiders is stacking one on top of another. They were blown out by Texas after their 3-0 start, then got run over by TCU after their win over the Mountaineers.

“It’s a tough thing because I couldn’t get it done after the West Virginia win, so kind of 0-for-1 in that area,” Wells said. “I think that’s going to come in time in this program. That’s what we want to do: We want us to stack success. And in time, I do believe it’ll come. We’ve undertaken a big, big change here. And you know, that’s kind of the next hurdle.”

Texas Tech has dominated the series over the last two decades, but the last two games have been much closer. Liam Jones hit the winning field goal with no time left in 2019 after Kansas had trailed 17-0 and 27-14 earlier in the game. Texas Tech outlasted the Jayhawks 16-13 in Lubbock last season to end the Jayhawks’ nine-game season.

Kansas has surrendered at least 45 points in each of its last four games, and that culminated in a 59-7 blowout at Iowa State a couple weeks ago. So to say that the bye week came at a good time would be an understatement.

“You can see it,” Leipold said, “probably mentally as much as anything. And now fall break is going on. There’s no school Monday or Tuesday, and we had not been on the field since Thursday. I thought you could see some freshness in them.”

While the Jayhawks have struggled in just about every department this season, one in which they have excelled has been penalties. They have just 22 through five games, the best mark in the Big 12 and the fourth-fewest in the country.

Texas Tech allowed TCU to run for 394 yards and five touchdowns, averaging nearly 8.5 yards every time the Horned Frogs handed off. Kendre Miller had 185 yards and three scores while Zach Evans had 143 yards and two.

“There were a few alignment errors. I think there was a few loose fits, not fitting it right,” Wells said. “And then I think the third thing that compounds both of those is you’re going against a good O-line and two legit backs.”

While success has been scant on offense lately, the Jayhawks are at least playing better up front. They gave up six sacks in their loss at Coastal Carolina in the second week of the season, but they’ve allowed just one in the three games since.

“I think we’ve been playing better up front. Both our tackles have improved immensely and feel more comfortable,” Leipold said. “To see them get better, the offensive staff has done a good job of getting rid of the ball quickly, holistically that group continues to get better, but we need to equate to more points on the board as well.”