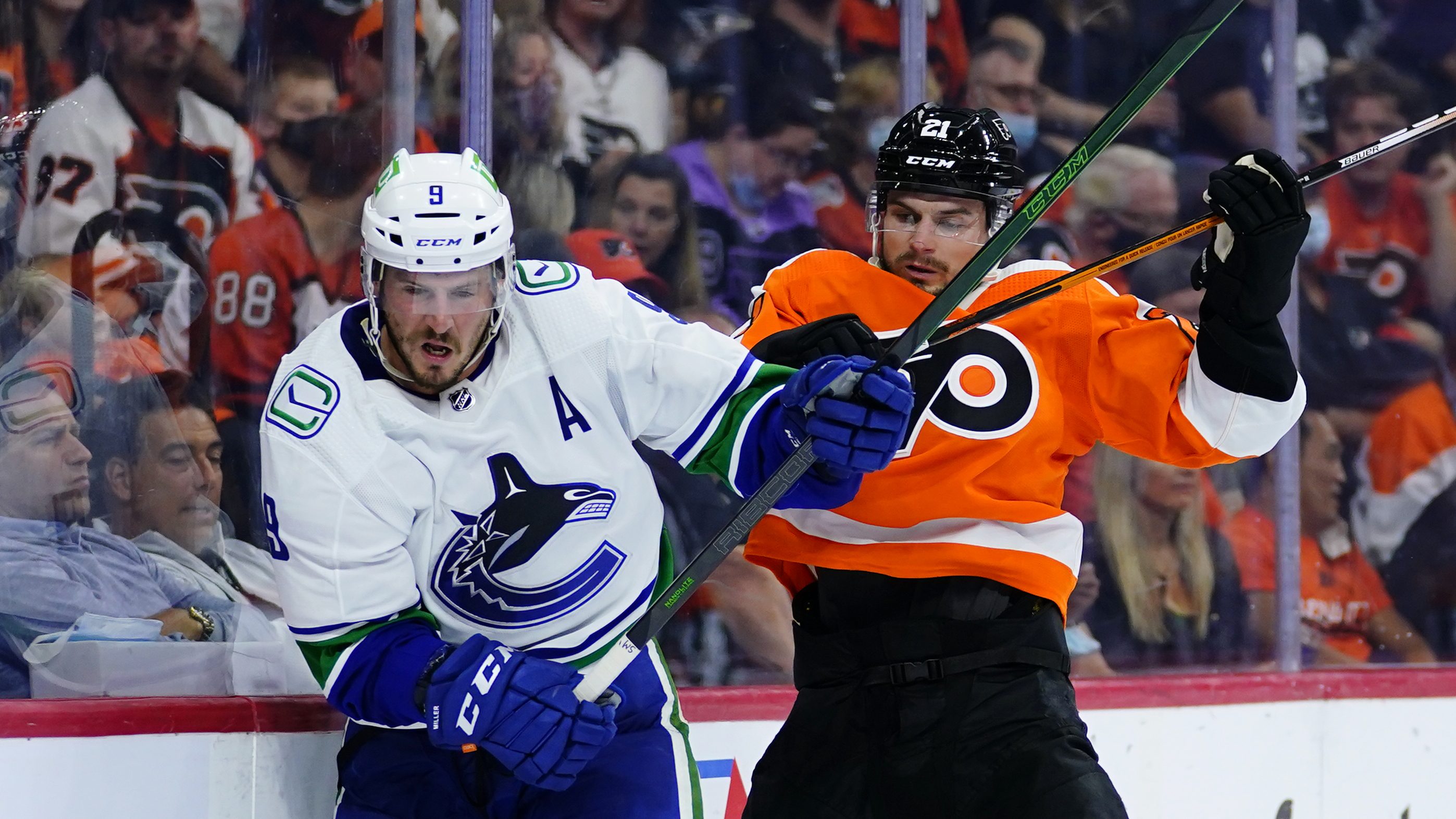 PHILADELPHIA (AP) — Elias Pettersson and J.T. Miller scored shootout goals and Vancouver scored four times in the second period to lead the Canucks past the Philadelphia Flyers 5-4 on Friday night.

Travis Konecny and Claude Giroux scored over the final 2:17 of regulation in the Flyers’ season opener that tied it 4-all and sent the crowd into an absolute frenzy.

The shootout ended the late-game enthusiasm and sent Vancouver to its first win of the season.

Vasily Podkolzin scored his first NHL goal and Alex Chiasson also had one against Carter Hart in the second period. Chiasson’s one-year deal in Vancouver came with $750,000 — but no spellcheck. His jersey had the i and a flipped, spelling his name “Chaisson.” He showed grit playing for the name on the front of the jersey, not the misspelled one on the back. Pettersson and Miller also scored in the second.

Thatcher Demko couldn’t hold the lead for the Canucks.

Konecny scored with 2:17 left make it 4-3 and the Flyers then pulled Hart for the extra attacker. The moved worked when Giroux beat Demko for their second goal in 1 minute, 5 seconds and tied the game.

Until then, the Canucks looked at home in their first game in the United States since March 1, 2020, and pounced on Hart in an abysmal second period.

Once considered the franchise goalie, the 23-year-old Hart couldn’t shake last season’s regression in this one’s opener. Hart was absolutely lost when he lost a puck that rested against his skate, allowing Miller to poke it in for a 4-2 lead.

The Canucks lost their opener but ended the Flyers’ streak of five straight wins in their first game of the season. Philadelphia overhauled its roster in the offseason, trading for Ryan Ellis and Rasmus Ristolainen and signing Keith Yandle and Derick Brassard. The Flyers also signed backup goaltender Martin Jones and traded for forward Cam Atkinson.

Atkinson scored his first goal with the Flyers in the second to make it 3-2. Joel Farabee, who signed a six-year, $30 million extension, also scored for the Flyers.

Flyers fans tailgated hours before the game, they packed the place for the opener, Gritty stirred the crowd into an orange frenzy and when Farabee scored first, the new goal song “This Girl” kept the fun times rolling.

Podkolzin, the 10th overall pick of the 2019 draft, snapped a wrister for his milestone goal and Hart failed to cover the post when Elias Pettersson smacked one off the back wall and into the net for a 2-1 lead.

Chiasson scored one from his knees as the puck trickled part Hart. Miller had the easy poke.

Giroux was among a handful of players who had “Be Like Jimmy” inscribed on their skates in memory of former NHL player — and the late brother of Flyers center Kevin Hayes — Jimmy Hayes. Jimmy Hayes was 31 when he was found dead inside his home over the summer. Kevin Hayes is out a few more weeks after abdominal surgery.

Canucks: At Detroit on Saturday night.