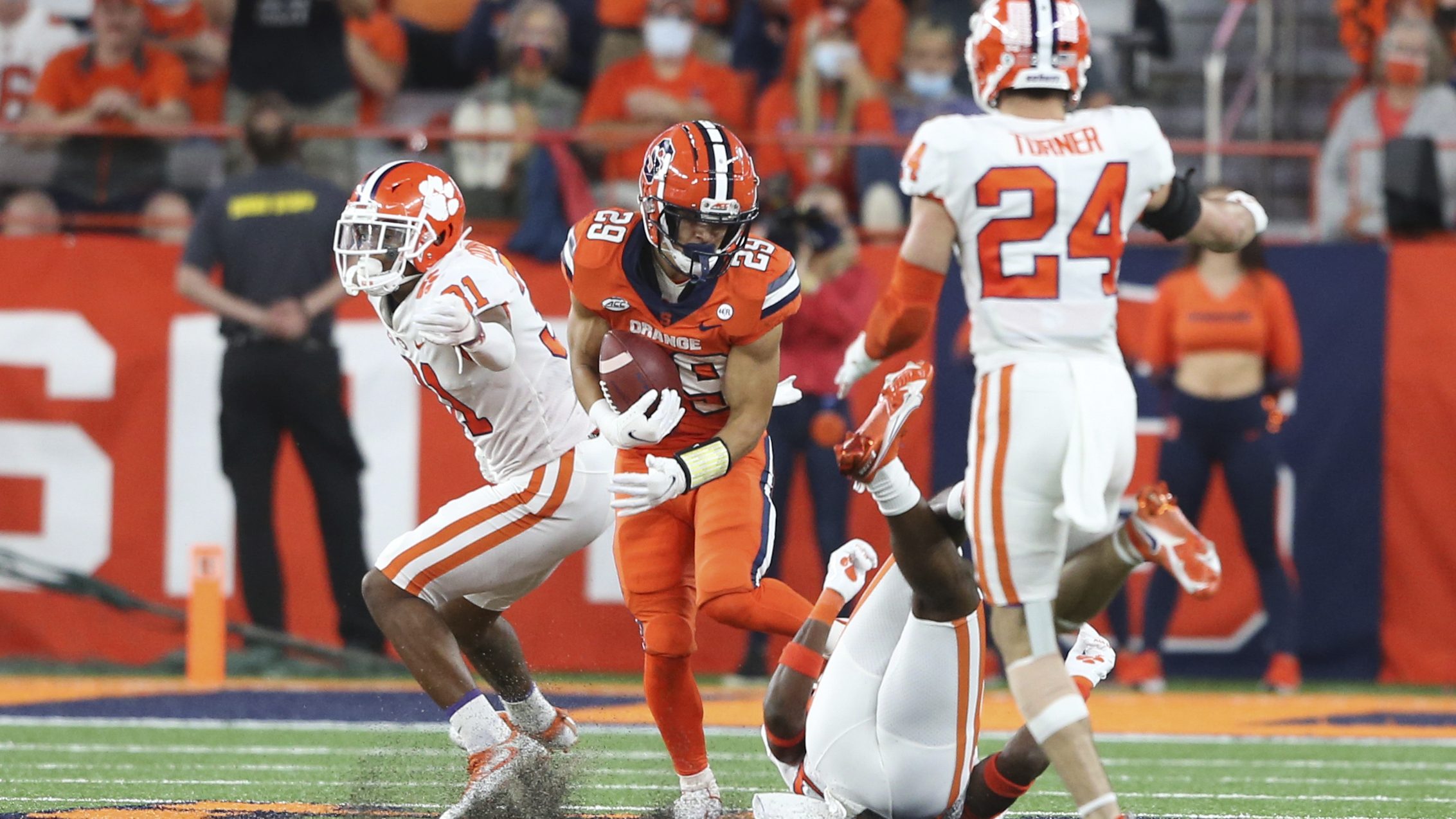 Syracuse wide receiver Trebor Pena (29) breaks through several Clemson defenders after a catch, on the way to a touchdown during the fourth quarter of an NCAA football game in Syracuse, N.Y., Friday, Oct. 15, 2021. (AP Photo/Joshua Bessex)

SYRACUSE, N.Y. (AP) — DJ Uiagalelei passed for 181 yards and one touchdown, Kobe Pace rushed for 76 yards and another score, and Clemson held off Syracuse 17-14 on Friday night.

Clemson (4-2, 3-1 Atlantic Coast Conference), coming off a bye week, played its first game as a team not ranked by the AP since Nov. 22, 2014, a 28-0 win against Georgia State, and held on for the victory after Syracuse place-kicker Andre Szymt missed a 48-yard field goal attempt with 38 seconds left.

Syracuse (3-4, 0-3) came into the game off two ACC losses decided on the final play of each game, and that seemed a possibility again on a night Orange tailback Sean Tucker continued his amazing season with 157 yards rushing on 22 carries.

Clemson had only surrendered five offensive touchdowns this season, the second fewest in the country. Syracuse got one in the second quarter and a stunner midway through the fourth when Garrett Shrader hit Trebor Pena for a 62-yard score just over two minutes after B.T. Potter’s 40-yard field goal had given the Tigers a seemingly insurmountable 17-7 lead.

Uiagalelei, who finished 21 of 34 passing, guided Clemson on a 13-play, 58-yard scoring drive that broke a 7-7 tie with time winding down in the second quarter. He keyed the drive with three pretty completions — a 17-yarder to Davis Allen on a fourth-and-5 play, an 11-yarder on the left side to Ajou Ajou to the Syracuse 13, and a 6-yarder over the middle to Justyn Ross to set up Kobe Pace’s 2-yard touchdown run with nine seconds left for a 14-7 lead,

Clemson took a 7-0 lead six minutes into the second quarter helped by a personal foul called against Syracuse linebacker Mikel Jones. Uiagalelei tacked on a 10-yard run, then hit Joseph Ngata in the right corner of the end zone. Ngata caught the ball falling backwards with one foot inside the line.

Syracuse tied it at 7-all just over three minutes later behind Tucker, who burst through a big hole and sprinted down the left side before being brought down at the 2 after a 39-yard gain. At that point, Clemson had run 23 plays for 95 yards and Tucker had nine carries for 126. Shrader scored untouched on the next play, just the second rushing touchdown allowed this season by the Tigers.

Syracuse squandered the only scoring threat in the first quarter after Tucker broke a 54-yard run down the right side to the Clemson 19. After Clemson coach Dabo Swinney called a timeout, Shrader was intercepted by Tyler Venables just inside the 10-yard line on the next play. It was the only turnover of the game.

Szymt became the program’s all-time leading scorer with his extra point after the Orange’s first touchdown. It gave him 335 points, one more than Nate Trout’s mark, set in 1999.

Pro Football Hall of Famer Floyd Little, one of Syracuse’s greatest tailbacks, was honored at halftime as part of Floyd Little Life and Legacy Day. Little was a three-time All-American in the mid-1960s and went on to play nine seasons for the Denver Broncos. He died on New Year’s Day of cancer.

Syracuse: Tucker again proved that he’s a special back and Shrader got hot late but still finished only 17 of 37 for 191 yards passing. Shrader only rushed for six yards on seven carries after putting up monster numbers the previous two games (178, 137). The Orange could do nothing offensively on a third-quarter possession that started near midfield and scored on big plays, not sustained drives.

Clemson travels to Pittsburgh on Oct. 23.

Syracuse is at Virginia Tech on Oct. 23.