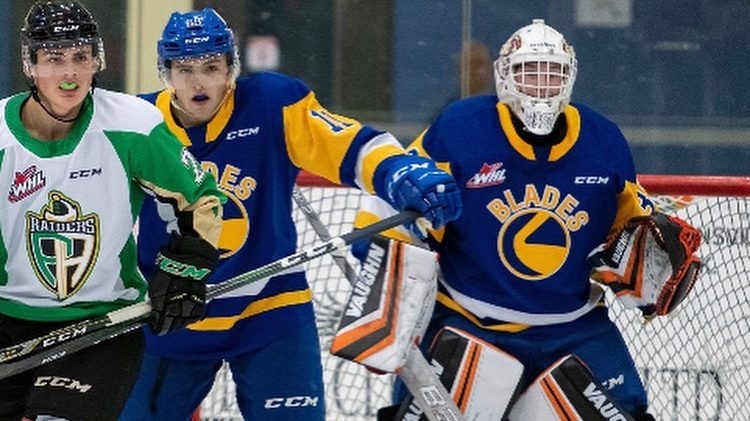 SASKATOON, Saskatchewan — In the game of hockey, a goalie is a person who makes sure that the opposing team doesn’t score a goal. He does this by preventing any hockey puck from entering the net he is guiding. This critical responsibility is designated to a unique set of people — the goalies.

The chances of a team winning a hockey game depends on how many hockey pucks the goalie can prevent from entering the net. Being a goalie is a crucial assignment, but it is surprising how often the goalies are not recognized like the players who are putting the puck in the net.

One Canadian goalie has stood out among his other hockey goalie peers. His name is Ethan Chadwick.

The 6-foot tall young man weighs 80 kilograms and is just 17 years old. He started making his presence known in the 2017-18 season with the Saskatoon Stallion U15 AA in the Saskatchewan AA Hockey League. He played 20 games in the season and made a Goal Against Average of 3.15. No other goalie had this average. Only Kai Nelson came close to Chadwick’s average with 3.25.

In the playoffs, he played five games and made a Goal Against Average of 2.40, making him the best goalie in the regular season and playoffs. In the following season, he became even better. Opposing teams had a tough time getting the hockey puck in his net. In 22 games played, his Goal Against Average was 2.83, and his save percentage was .920.

Because of his exceptional ability in the goal post, Saskatoon Contact U18 AAA in the Saskatchewan Male AAA Hockey League signed him in the 2019-20 season. He played 16 games with a Goal Against Average of 2.70 and a .910 save percentage. Only Chase Hamm, with a 2.66 Goal Against Average, was ranked higher than him that season.

He kept becoming better every season. In the 2020-21 season, his Goal Against Average was 1.00. The best goal average for a goalie is between 1.85 to 2.10 in the National Hockey League.

He joined the Saskatoon Blades in the Western Hockey League later that season. He didn’t play any game that season but the young Chadwick was busy training and preparing himself for his big debut.

In the 2021-22 preseason game against the Raiders, Chadwick got his chance to prove all that Colin Priestner said about him when he was signed on was very true. If possible, he exceeded expectations.

In the Western Hockey League – Saskatoon Blades News Release, the sportswriter was quick to recognize the impact of Chadwick during the game. Chadwick was said to be flawless on 20 shots during the game. However, for those following his career, this was expected.

Ethan Chadwick finally got to play his first game for the Saskatoon Blades on Oct. 1 against the Moose Jaw Warriors. He played for a total of 13 minutes, conceding only one goal with three saves. His goal save percentage was 0.750, and his Goal Against Average was 4.63 in just 13 minutes spent on the ice.

One can refer to Ethan Chadwick as a “Hockey Puck Magnetor” because hockey pucks have a hard time getting into his net. However, fans know the stuff Chadwick is made up of, and with more games, his skills will be more evident to as many as may still harbor some doubts.