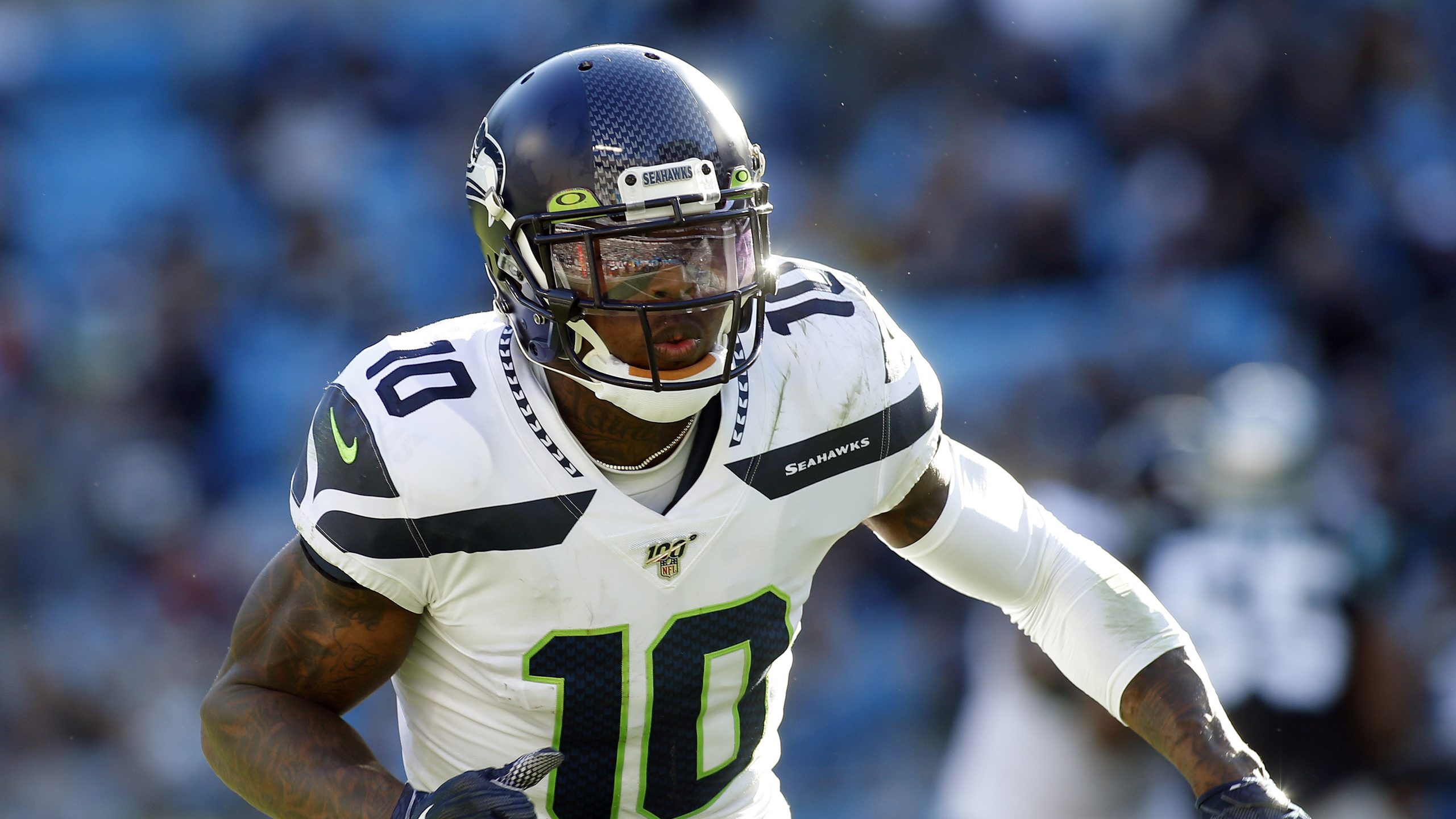 In this Dec. 15, 2019, file photo, Seattle Seahawks wide receiver Josh Gordon (10) sets up against the Carolina Panthers during the second half of an NFL football game in Charlotte, N.C. The Kansas City Chiefs have never been shy about giving players with questionable backgrounds a second chance. But when it comes to wide receiver Josh Gordon, they are giving him what amounts to a sixth. That's because Gordon was just reinstated by the NFL following a fifth drug-related suspension. But if he can steer clear of trouble in Kansas City, the wildly talented Gordon could provide the Chiefs offense with the kind of big, athletic wide receiver they have been lacking. (AP Photo/Brian Blanco, File)

KANSAS CITY, Mo. (AP) — At age 30 and after five suspensions handed out by the NFL for violations of the league’s substance abuse policies that cost him three full seasons, wide receiver Josh Gordon describes his landing with the Kansas City Chiefs as “a dream destination.”

“The opportunities, it’s a blessing, it’s a blessing to have,” Gordon said. “Most importantly this one being here. It’s brand new, it’s current, I’m in the present. I’m taking it all in stride and I’m enjoying it.”

Excelling on the field rarely has been an issue for Gordon. He earned All-Pro honors in 2013 with Cleveland, leading the league with 1,646 receiving yards. In 64 NFL games spread over parts of nine seasons, Gordon totaled 4,263 receiving yards. His 17.2 yards per reception in his career rank second among active players behind DeSean Jackson with 17.6 yards.

The suspensions, however, have served as countless speed bumps during stops with Cleveland, New England and Seattle. Before last Sunday night he hadn’t played an NFL game since Dec. 15, 2019 after receiving his latest suspension from the league. He was conditionally reinstated in December 2020, but the league determined he had broken the terms of his reinstatement and resumed his indefinite suspension.

When the NFL last month granted Gordon his chance to return to the football field, several teams expressed interest, including the Seahawks with whom Gordon spent parts of the 2019 and 2020 seasons. But when the Chiefs made a last-minute bid for his services, Gordon said it was the choice that “made the most sense.”

“I knew nothing about the city,” Gordon said. “I just knew the good group of guys here, the environment I heard nothing but great things, the camaraderie, the family life environment. When I got here I knew immediately this place that could look out for me, take care of me, and I can reciprocate that back and just come in and do my job and make it easy on myself.”

Gordon signed with the Chiefs’ practice squad Sept. 28, just one day after his reinstatement to the NFL. The Chiefs showed little hesitation working Gordon into the offense, promoting him from the practice squad to the active roster after just three practices. He’s impressed head coach Andy Reid with his intelligence and ability to pick up the team’s offense quickly.

Gordon appreciates the style with which Reid leads his players.

“Coach Reid, I think he’s a cool under-the-collar-type of a guy, which I enjoy,” Gordon said. “He didn’t really hold me to any higher standard but to come in and be a professional and do my job.”

In his first outing Sunday night against the Buffalo Bills, Gordon played nine snaps, with one reception for 11 yards. That improvised catch showed how Gordon can make big plays happen, according to quarterback Patrick Mahomes.

“It was kind of a broken play where I was scrambling out to the right and he’s such a big target, I could still see him, so I put it up there, having trust in him, and he went up there and made a play,” Mahomes said. “I thought he did a lot of good things. He came off the ball hard, he ran fast, did stuff, didn’t have any missed assignments or anything like that.

Reid anticipated Gordon getting around 20 snaps against Buffalo last Sunday night. The Chiefs fell into a deficit quickly, however, and picking up their offensive tempo meant fewer snaps for Gordon. He appears in a line for a heavier workload this Sunday when the Chiefs visit Washington.

“We still have a few plays on the game plan sheet from last week,” Reid said. “He’s gotten a couple more plays in the game plan, so I think he’ll probably get a few more snaps than that.”

“His skill set is something not a lot of people have in this world,” Mahomes said. “To be that big, that fast, that strong, so I think as you get more comfortable – and you see this in receivers all the time – when they start trusting that what they’re doing is the right thing, in that offense you’ll see him make more and more plays.”

Off the field, Gordon feels rapidly accepted in Kansas City, and he hopes it’s the beginning of a long-term relationship.

“Fortunately I don’t have the wear and tear on my body that somebody I guess normally at this age and stage in their career, so hopefully I can play until I’m 37, 38, who knows,” Gordon said. “I’m just fortunate, I think, to be in this position. I don’t feel like there’s a rush to do anything or do something I’ve done in the past. I just want to be a part of a great team and a great organization, play my role.”

He also hopes to apply one of the lessons he learned during his latest time away from the game.

“Really you have to have an extreme level of focus if you want to do anything consistently well in life,” Gordon said. “I think perseverance and gratitude, just appreciation for every day, being able to wake up being healthy, having the resources I have at my disposal to use and really go out there and get what it is that I desire most in life, and that right now is playing football in the NFL.”

NOTES: The Chiefs on Friday ruled out DE Chris Jones (wrist), CB Charvarius Ward (quad) and TE Blake Bell (back) for Sunday’s game at Washington. … WR Tyreek Hill (quad) is listed as questionable although Reid said “he was bouncing around pretty good out there” as a limited participant on Friday after the club held him out of workouts the past two days. … LG Joe Thuney was a full participant in practice Friday after sitting out the past two days with a fractured hand suffered last week against Buffalo.