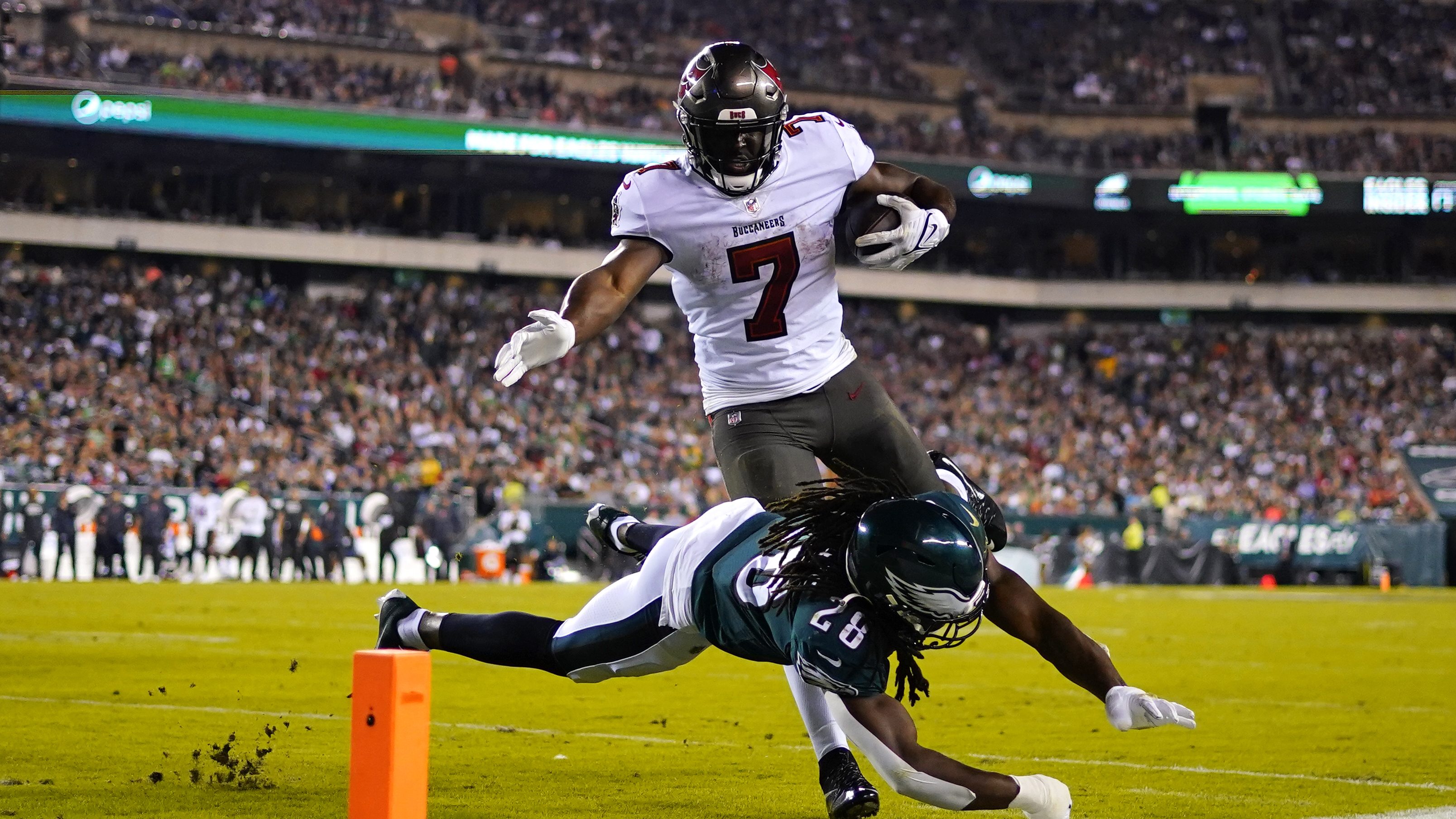 TAMPA, Fla. (AP) — Tampa Bay’s injury-riddled defense has yet to hit its stride this season. However, the Buccaneers continue to thrive with an offense that’s become even more potent with the re-emergence of Leonard Fournette.

The talented running back, in his second season with the defending Super Bowl champions after wearing out his welcome in Jacksonville, is making the most of an opportunity to re-establish himself as a featured back.

The Bucs have made a conscious effort to get the fifth-year pro more involved in the passing attack the past three games, and Fournette has embraced the expanded role that’s eased some of the burden on Tom Brady, who leads the NFL in passing.

Although the Bucs (5-1) have yet to have a 100-yard rusher this season, the running game is showing life after Fournette accounted for 139, 110 and 127 total yards from scrimmage in wins over the Patriots, Dolphins and Eagles within a span of 12 days.

In addition to rushing for 81 yards and two touchdowns in Thursday night’s 28-22 victory at Philadelphia, he caught all six passes Brady threw to him for another 46 yards.

“To be honest, it is just hard work,” Fournette said. “Throughout the week, we had a game plan and I try and follow that as much as I can down to the core to help my team out and put us in a better position. That is all I am doing.”

Brady made a call to Fournette when the running back was released by the Jaguars, encouraging him to consider joining the Bucs. The two of them frequently spend extra time after practice working on pass routes.

“He’s trying to tell me what he likes, what he thinks the route should be, and I just follow,” Fournette said.

“He’s a great back. He’s big, tough, catches it, runs, blocks, does everything for us,” Brady said. “Great to have him in there. Obviously when he’s rolling, it’s tough to stop us.”

Brady leads the NFL in passing yards (2,064) and touchdowns (17) versus three interceptions, one in the past four games. Antonio Brown had another big game against the Eagles, finishing with nine receptions for 93 yards and a TD.

The secondary is down three injured starters: cornerbacks Sean Murphy-Bunting and Carlton Davis, safety Antoine Winfield Jr. Losing Sherman with a pulled right hamstring early in Thursday night’s win at Philadelphia compounds the situation, however, coach Bruce Arians says he has confidence in backups such as Dee Delaney, Russ Cockrell and Pierre Desir.

Tight end O.J. Howard, who’s back after missing most of 2020 with an Achilles tendon injury, had his best game of the season with six catches for 49 yards and a TD against Philadelphia.

“Juice is getting better and better,” Arians said. “He’s stepped up every week.”

Penalties remain a concern. The Bucs were flagged seven times for 120 yards on Thursday night.

Arians said Friday that Sherman had yet to have an MRI and wouldn’t speculate on the severity of the hamstring injury. Meanwhile, he’s hopeful Winfield, who’s missed two games due to a concussion, will be able to return next week.

The defending champs will have four days off before returning to work to begin preparation to host the Chicago Bears on Oct. 24.