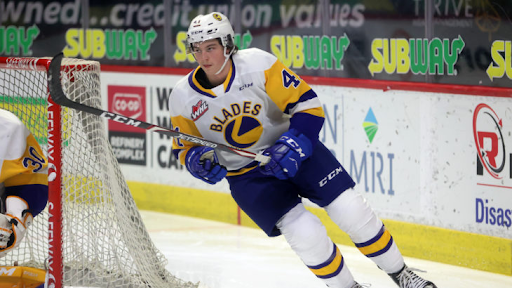 SASKATOON, Saskatchewan — Rhett Rhinehart is arguably one of the best defensemen in the Western Hockey League, if not the best. He was born on 27th November 2001 in Lloydminster, Albert, Canada.

The 19-year-old giant defender is 6-foot-4, weighs 101 kilograms and is a right shooter.

Rhinehart started his playing career in his hometown, Lloydminster. In the 2014-15 season, he joined the Lloydminster Heat U15 AAA in the Alberta Major Banta Hockey League. He scored five goals and provided 14 assists in 29 games. He was the best defender in the league in terms of the total points made. Only Ladon Johnson came a little close to that with his 17 total points.

After one official season with the Heat, he joined the Yale Hockey Academy U15 Prep in the Canadian Sport School Hockey League in the 2015-16 season.

In 25 games played, Rhinehart scored five goals and provided 13 assists, retaining his title this time in a different league and club as the defender with the highest total point. In the playoffs that season, he made fans wonder if he was a defender or a forward because he was playing both excellently.

He then played 25 games in the U18 the following season, scoring eight goals and providing 21 assists before having a short spell in the Western Hockey League with the Prince Albert Raiders. Again, he had one of his best rankings in the total point table, where he was ranked fourth in total points with 30. However, he still maintained his record as the defender with the most number of goals and assists in the league.

In 2016-17, his full season with the Prince Albert Raiders in the Western Hockey League, he played 31 games but had only one assist. It was beginning to seem like the fuel that earned him lots of goals and assists as a defender had finished at this point. Notwithstanding, he was still the best in his defense, hence the reason why he played that many games.

Rhinehart also played 29 games with the Prince George Cougars in the same league, scoring three goals and providing an assist before representing Canada Red U17 in the World Under-17 Hockey Challenge. Only the best hockey players represent Canada in this competition, which says a lot about the Lloydminster native. He provided an assist in six games played.

Our giant defender also spent the 2018-19 and 2019-20 seasons with the Prince George Cougars. He became a regular, playing a total of 104 games, scoring eight goals and providing 39 assists. Here, Rhinehart got his scoring and assisting fuel refilled.

He joined the Saskatoon Blades in the 2019-20 season, playing 21 games and providing three assists.

The defender had a short loan spell with the Flin Flon Bombers in the Saskatchewan Junior Hockey League in the early part of 2020-21. However, he only played two games with them and provided one assist before returning to Saskatoon Blades, where he played 21 games for the remainder of the season, scoring five goals and providing 11 assists.

During this period, he inflicted a decisive blow against Regina Pat in front of the goal in a game played on the 15th of April. After that, he scored his first career hat-trick, which thrilled his teammates and fans.

Now the assistant captain of the Saskatoon Blades, he has shown himself to be not just a defense giant, a goal scorer, and an assist provider, but also a leader in and outside the field.

“Being a fourth-year guy now, I know what it’s like to be in the younger guys’ shoes. I do my best to reach out to the younger guys and hang out with them…to give them any words of advice on little things.” Rhinehart said.

Without any doubt, Rhett Rhinehart, a complete giant defender, goals scorer, assists provider, and a leader on and off the pitch, will be one of the best draft picks, if not the best, for any team that will pick him.