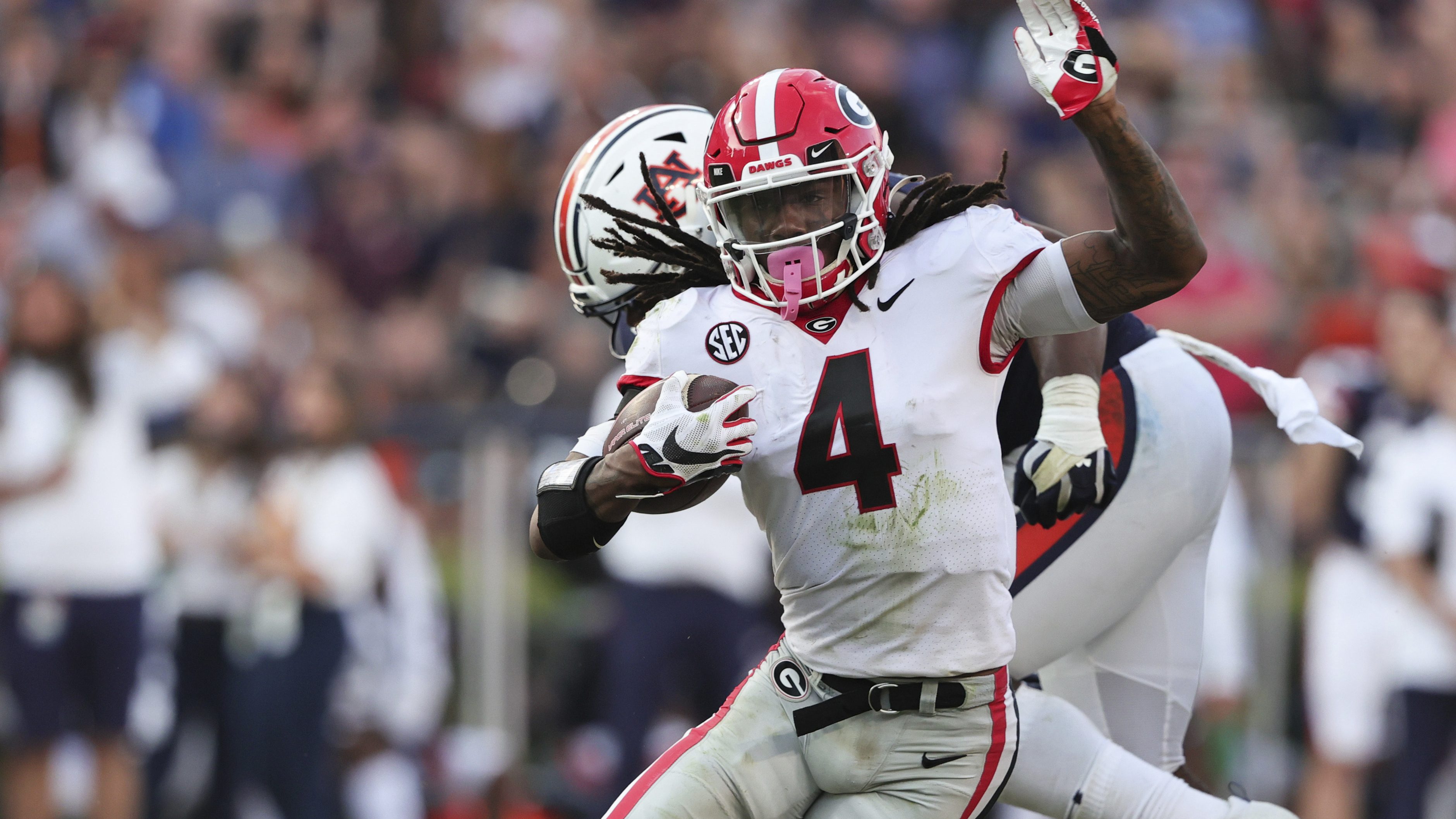 Georgia running back James Cook (4) carries the ball against Auburn during the second half of an NCAA college football game Saturday, Oct. 9, 2021, in Auburn, Ala. (AP Photo/Butch Dill)

No. 1 has been a particularly secure position during the College Football Playoff era.

Last week’s Alabama loss as the No. 1 team in the country to Texas A&M was just the fourth outside of the playoff for the top-ranked team in the AP poll during the eight-year history (2014-present) of the CFP.

That November, Texas A&M and eventual Heisman Trophy winner Johnny Manziel went to top-ranked Alabama and beat the Tide. The next week, Stanford knocked off No. 1 Oregon in overtime.

The Aggies have set the stage again with a victory against Alabama. No. 11 Kentucky will try to play the role of Stanford to Georgia’s Oregon on Saturday.

The Wildcats have not beaten a No. 1 since 2007, when they were the 17th-ranked team in the nation and beat LSU at home in triple overtime.

Kentucky goes to Georgia on Saturday, one of two games matching ranked teams during Week 7 of the season.

Wildcats-Bulldogs has the better ranking in combined record (12-0), but Georgia is a huge favorite so whether that game will be competitive for four quarters is questionable.

The unbeaten Cowboys are positioned to be the Big 12’s surprise contender if they can hand Texas a second straight loss.

The Longhorns are coming off a crushing collapse against No. 4 Oklahoma in the Red River Rivalry and another setback would put them in a deep hole in the Big 12 race.

The Cowboys’ calling card has been defense so far, especially against the run. Oklahoma State is 10th in the nation, allowing 2.76 yards per carry.

Can they contain Texas’ Bijan Robinson? The Longhorns’ sophomore is averaging 132 yards per game and 6.81 per carry.

Speaking of good running backs facing stingy defenses, if Rodriguez (fifth in the nation in rushing at 128 yards per game) can penetrate the Bulldogs’ great wall of NFL prospects he would vault toward the top of most Heisman hype lists.

Here’s another idea. The Heisman contenders are generally the best players on the best teams. So how about Iowa center Tyler Linderbaum, clearly the best player at his position and maybe the best offensive linemen regardless of position?

5 — Number of consecutive victories for Auburn over Arkansas, but the 17th-ranked Razorbacks closed the gap last year. The first four victories in the streak were by an average of 39 points. Last season, the Tigers extended the streak in a two-point game that featured a questionable non-called fumble by Auburn.

7.29 — Yards per play Baylor is averaging this season under first-year offensive coordinator Jeff Grimes. The Bears were one of the worst offenses in the country last season at 4.44 per play, but turned it around by hiring Grimes away from BYU. The Bears host the 19th-ranked Cougars on Saturday.

14 — No. 4 Oklahoma’s winning streak, now the longest in the nation after Alabama lost last week. The Sooners host TCU.

28 — Tennessee has scored 28 points in the first quarter of back-to-back games for the first time in modern program history. The Vols welcome former coach Lane Kiffin and No. 13 Ole Miss on Saturday.

47-9 —- Total No. 19 Arizona State has outscored opponents this season in the fourth quarter. The Sun Devils visit Utah in a key Pac-12 South matchup.

The Cyclones (3-2) were expected to be in the middle of the Big 12 and maybe even the College Football Playoff race, but they have been bumped to the side by their in-state rivals from Iowa City.

There is still time for Iowa State to climb back into the Big 12 contention. Farmageddon rival Kansas State comes in off an open date and on a two-game losing streak, having dropped games to Oklahoma State and Oklahoma.

The Hurricanes are 2-3 and have been ravaged by injuries, including a likely season-ender to quarterback D’Eriq King.

The injuries don’t seem to be buying much empathy for Diaz, who is in his third season at The U.

The good news, if there is any, is Miami heads to North Carolina with only one loss in the ACC and the potential to get right back into the Coastal Division race.

The Tar Heels (3-3, 1-3 ACC) have been equally, if not more, disappointing than the Hurricanes, but nobody is seriously looking to run Mack Brown out of Chapel Hill.

How realistic it would be for Miami to make a coaching change is an open question. But patience with Diaz among the fans is running close to empty.