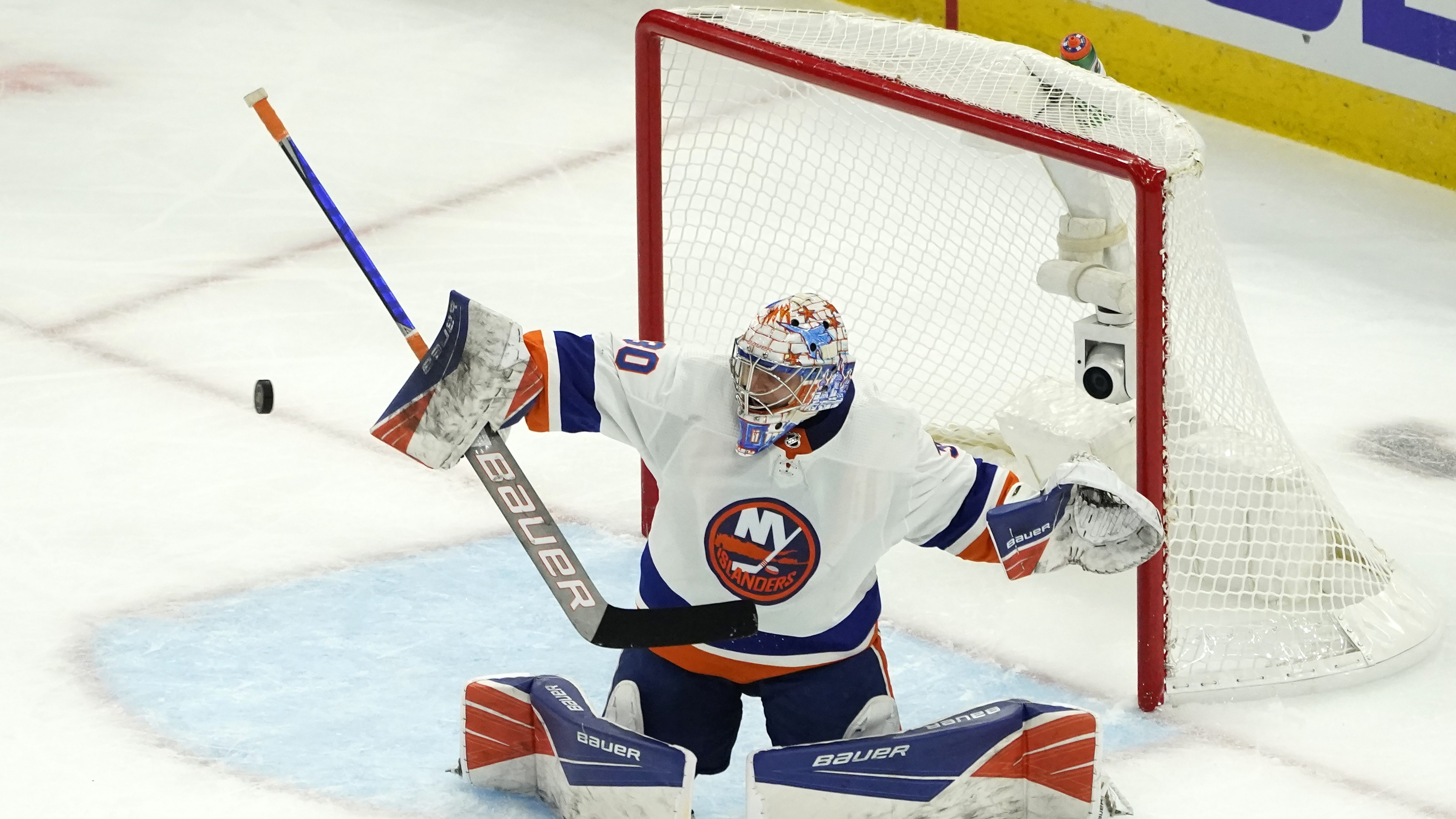 New York Islanders goaltender Ilya Sorokin makes a blocker save during the second period of the team's NHL hockey game against the Chicago Blackhawks on Tuesday, Oct. 19, 2021, in Chicago. (AP Photo/Charles Rex Arbogast)

CHICAGO (AP) — Ilya Sorokin made 39 saves and Oliver Wahlstrom scored twice in the third period, helping the New York Islanders beat the Chicago Blackhawks 4-1 on Tuesday night for their first victory of the season.

Anthony Beauvillier and Cal Clutterbuck also scored as New York improved to 1-2-0 on its opening 13-game road trip. The Islanders don’t play their first home game at the new UBS Arena until Nov. 20.

Chicago outplayed New York for long stretches in its home opener, but remained winless during a sluggish 0-3-1 start. Coach Jeremy Colliton was booed by the crowd during pregame introductions, and there were more boos as the Islanders pulled away in the third.

MacKenzie Entwistle scored for Chicago with 26 seconds left, and Marc-Andre Fleury made 25 stops.

The Blackhawks have been outscored 17-8 this season. They haven’t led in any of their four games.

New York scored three times in the third. Wahlstrom made it 2-0 when he intercepted an errant pass by Henrik Borgstrom and eluded sliding defenseman Jake McCabe before beating Fleury through the goaltender’s legs 48 seconds into the period.

Wahlstrom then scored from the left circle at 8:51, and Clutterbuck made it 4-0 with his first of the season at 11:06.

Chicago forward Mike Hardman left about eight minutes into the third after absorbing a big hit by Matt Martin. It was Hardman’s first game after he was recalled from the minors on Monday.

Blackhawks winger Jujhar Khaira then fought with Martin, but it wasn’t enough to wake up his listless team.

The Islanders got Martin back after the forward missed the first two games because of offseason ankle surgery, but Anders Lee was scratched because of an illness. The team said it wasn’t COVID-19 related.

Chicago put together a strong start, outshooting New York 18-9 in the first period. But Sorokin was solid in net, and the Islanders started to play better at the start of the second.

Beauvillier dug the puck out from behind the net and slammed it home for a 1-0 lead 4:08 into the period. It was Beauvillier’s first goal of the season after he had 15 last year.

New York had a chance to add to its lead when Chicago defenseman Seth Jones was sent off for hooking with 2:06 left. But the Blackhawks killed the penalty.

Alex DeBrincat got loose for a short-handed breakaway late in the second, but was denied by Sorokin.

Islanders goaltender Semyon Varlamov is practicing with the team again. He opened the season on injured reserve with what the club described as “soreness.”

“Varly’s feeling pretty good. … Hopefully we get to the weekend and he might become available,” coach Barry Trotz said during his pregame availability.

The Blackhawks paid tribute to longtime goaltender Tony Esposito with a pregame video that included fellow Hall of Famer Chris Chelios leading the crowd in chants of “Tony! Tony!” Esposito died in August following a brief battle with pancreatic cancer.