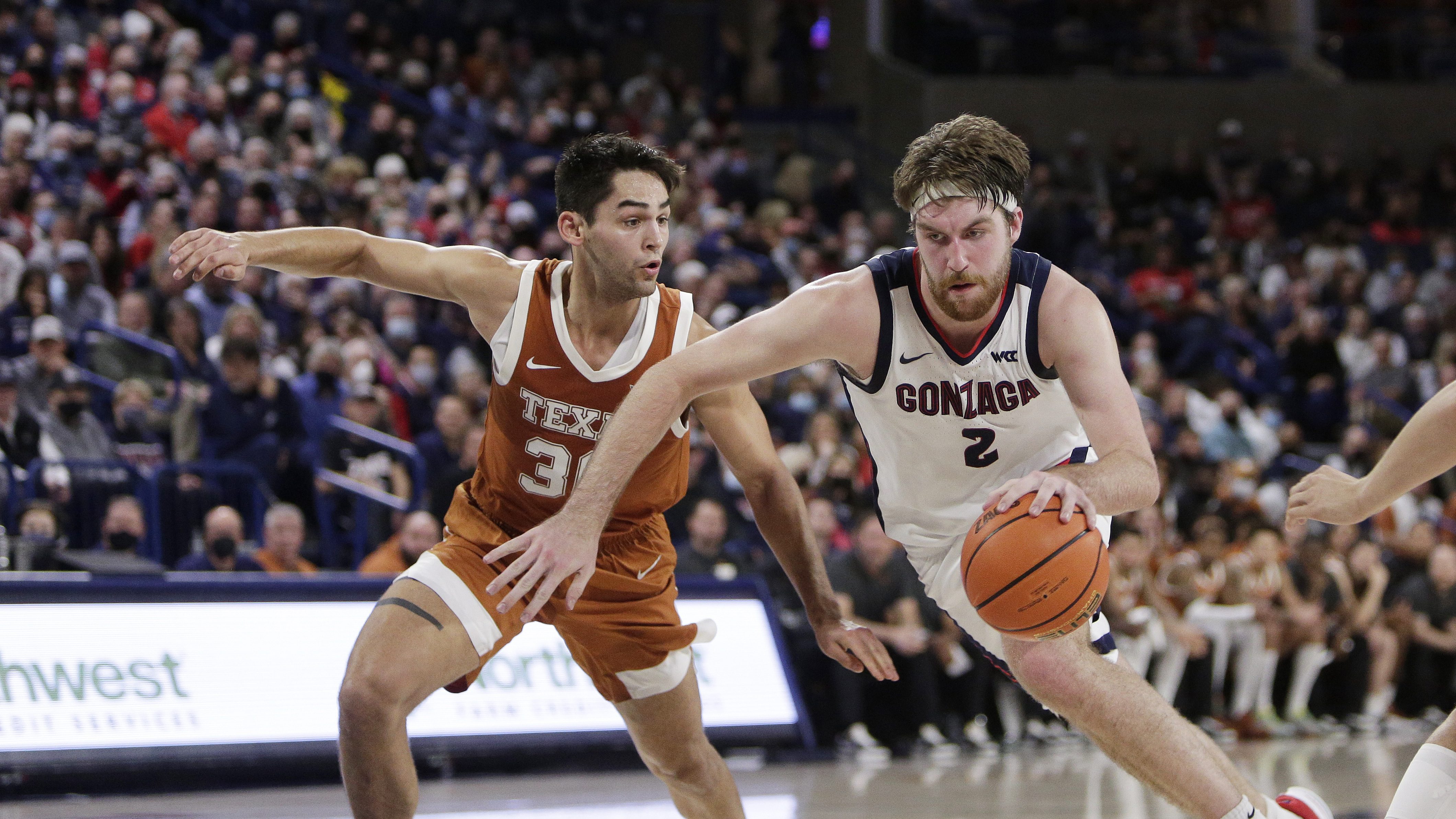 “That’s a great team win, man,” said Timme, a leading candidate for player of the year. ”That’s a tough team.”

Timme played nearly 38 minutes and added seven rebounds and three assists while carrying the bulk of the offensive load.

“I always have fun when I play,” the junior forward said. “It’s a joy to play this game.” He added that “being able to be in a pressure situation is a privilege. We are grateful to play high-level games.”

“He played like it tonight,” said Few, who returned to the sidelines Saturday after serving a three-game suspension for a DUI. He sat out two exhibition games and the season-opening win over Dixie State.

“He’s an off-the-charts competitor” and brings a competitive swagger, Few said of Timme.

Timmy Allen scored 18 points for Texas (1-1), which was trying to beat a top-ranked team for the first time in program history. Instead, the Longhorns fell to 0-12 against No. 1 teams.

Texas fell behind early and was down 20 at halftime. The Longhorns outscored the Zags 47-39 in the second half, but it wasn’t enough.

Beard noted that he had recruited Timme, a Texas native, while he was at Texas Tech.

Timme exceeded his previous high of 30 points. Anton Watson had 10 points for Gonzaga.

The Bulldogs started fast, as Timme had 11 points on 5-for-5 shooting less than five minutes into the game. Gonzaga shot 59% in the first half, while the Longhorns shot just 36% and made nine fewer field goals.

Texas chipped away at the deficit as Gonzaga’s shooting cooled off in the second half. Allen had a pair of baskets during an 8-2 run that cut Gonzaga’s lead to 60-49 with 10 minutes left.

Gonzaga scored the next seven points for an 84-66 lead with 2:36 left and the Longhorns could not come back.

The Longhorns are the highest-ranked opponent to visit the McCarthey Athletic Center since it opened in 2004. Gonzaga has a 237-15 all-time record in the building.

Beard said more top teams should schedule early-season games against each other. Gonzaga will play at Texas next year.

“The best teams in the country should play real road games,” he said. “I’m looking forward to playing more.”

Gonzaga is 4-0 against Texas, with all previous games at neutral sites.

Bolton hit a buzzer-beater from half court at the end of the first half. “I picked it up and tried to get it off before the clock ran out,” he said.

Gonzaga outscored the Longhorns 44-22 in the paint … After shooting nearly 60% in the first half, the Zags cooled off to 48% in the second.

A quality early-season win should keep Gonzaga atop the Top 25. Texas is likely to slide down a bit.

Texas: The Longhorns fell behind early and never made up the deficit. … Beard signed six highly ranked graduate transfers before the season. … Carr, a transfer from Minnesota who scored 11 points, is the Big 12 preseason newcomer of the year.

Gonzaga: Gonzaga looked solid in front of a raucous home crowd. … The Bulldogs were ranked No. 1 all last season and were undefeated until losing to Baylor in the NCAA championship game. … Timme was the lone unanimous pick to the AP Preseason All-American team.