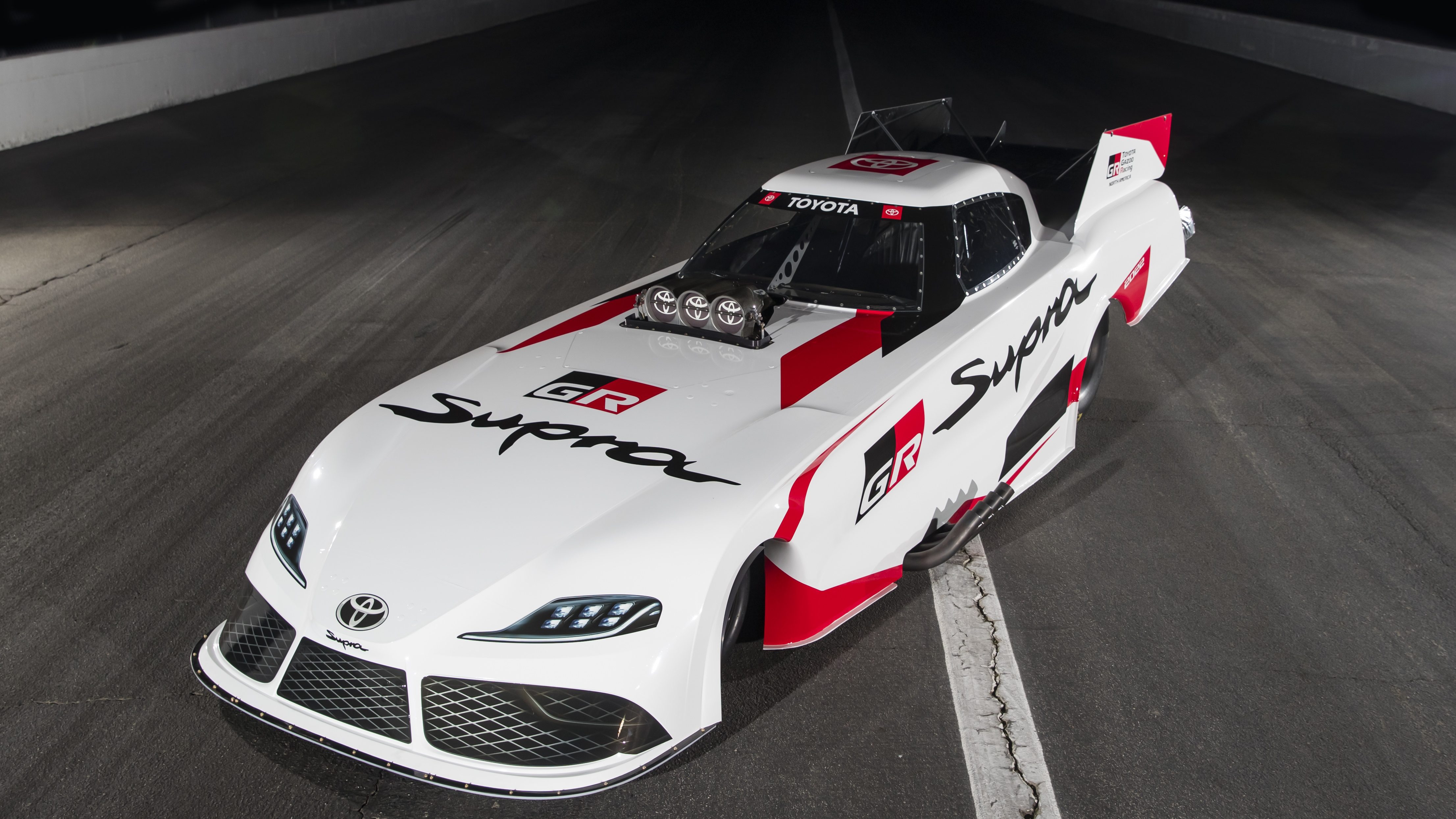 This photo provided by Toyota Racing shows the Toyota Supra Funny Car. On Sunday, Nov. 14, 2021, Toyota unveiled the GR Supra it will use in the 2022 NHRA season, ending a 10-year run with the Camry in Funny Car competition. (Mark Rebilas/Toyota Racing via AP)

Toyota on Sunday unveiled the GR Supra it will use in the 2022 NHRA season, ending a 10-year run with the Camry in Funny Car competition.

The reveal was made at the NHRA season finale at Auto Club Raceway in Pomona, California, and the car is expected to debut in the 2022 season opener back at Pomona in February. Before the Camry, Toyota has competed with the Celica and Solara in its 20 years of NHRA participation.

“We were looking for other opportunities with the Supra and the NHRA Funny Car is a natural,” David Wilson, president of Toyota Racing Development, told The Associated Press at the IMSA season finale at Road Atlanta in Georgia.

“We had a good run with the Camry. But from a marketing side, clearly what we are trying to do is provide more exposure to the Supra, and the NHRA fits perfectly.”

The new body for 2022 marks the most significant styling characteristics of any previous Funny Car. The body styling is worked into the car from bumper to bumper and there are true lines and details within the body, not just a decal package.

NHRA actually insisted that if Toyota was going to do redesign its Funny Car, it had to be similar to a production vehicle, and Wilson told the AP its submissions were rejected by the series several times before this Supra was approved.

The final product is as close as possible to a street-legal Supra — and yet it still can run 330 mph in an NHRA event.

But safety enhancements were also a vital part of the redesign process and Toyota leaned on driver J.R. Todd for assistance in what changes were needed.

For example, Toyota was unaware that drivers could not see over the injectors on the Camry.

“It’s like sitting in a car with no ability to see over the hood,” Wilson said. “So we took the opportunity to work with J.R. Todd and we actually filmed him in his Funny Car and got a clear understanding of what his vision was. We basically raised him up in the seat.”

The new greenhouse in the Supra also has additional safety foam around the driver’s cockpit within the car.

Todd said it was an anomaly when Toyota asked him what the drivers would like to see improved on its new Funny Car.

“We’re normally told to just get in, drive the car and deal with it,” Todd said. “It just goes to show how much Toyota cares and what they’re willing to do to make things better to compete and make sure that the driver is comfortable and give you all the tools and resources you need to win.”

He said he wore camera glasses inside the car, then a visor camera on his helmet, all so that Toyota could clearly see Todd’s line of vision while in the seat. Todd said changes would have been difficult under the existing Camry Funny Car, but “from what I’ve seen in the new GR Supra, the visibility is going to be quite a bit better than what we currently have with the Camry.”

“It definitely gives me all the confidence in the world to know that Toyota is always behind you and they’re willing to do whatever it takes for you to go out there and win and compete at a high level,” Todd said. “The new GR Supra body is coming in and it’s going to blow everyone’s mind when they see it. For me as a driver, to have a body that’s going to have more front downforce and better aerodynamics than we’ve had in the past, it gets me really excited as a driver and I can’t make as many excuses about keeping it in the groove or getting it down the track. I’m really excited to get it on the track and see what we can do with it.”