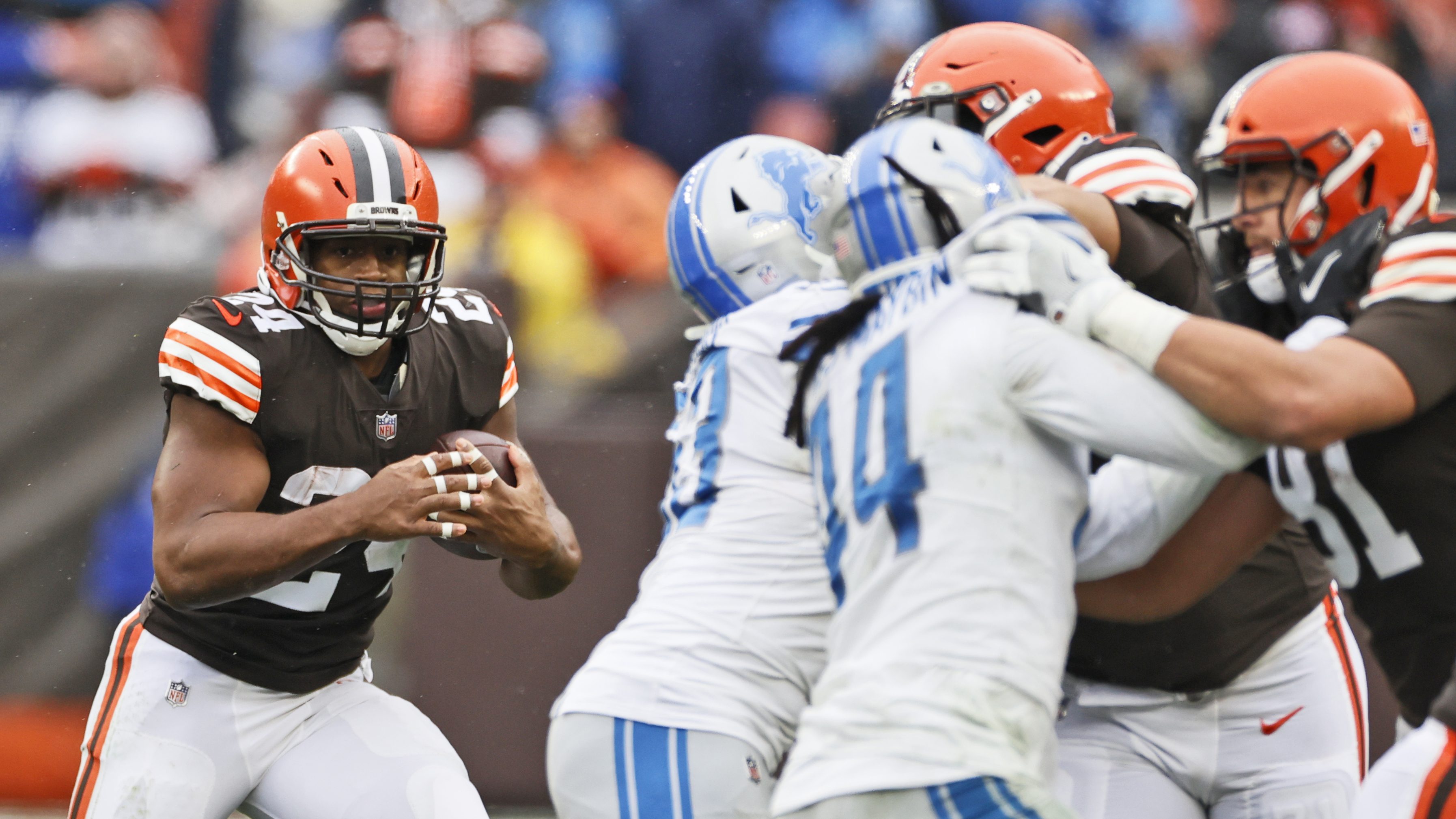 Cleveland Browns running back Nick Chubb (24) rushes during the first half of an NFL football game against the Detroit Lions, Sunday, Nov. 21, 2021, in Cleveland. (AP Photo/Ron Schwane)

CLEVELAND (AP) — Nick Chubb caught a touchdown pass and ran for 130 yards as the Cleveland Browns held on to avoid a season-wrecking upset and keep Detroit winless with a sloppy 13-10 victory over the Lions on Sunday.

Chubb returned to Cleveland’s lineup after a one-game absence due to COVID-19. The star running back caught a 5-yard TD pass from Baker Mayfield and then helped the Browns (6-5) run out the clock.

With Cleveland’s crowd chanting his name before every snap, Chubb gained 36 yards on the final drive as the Browns chewed up the last 2:29.

Wide receiver Jarvis Landry ran for a score as the Browns barely bounced back after being blown out by 38 points last week at New England.

The Lions (0-9-1) couldn’t build off any momentum from their 16-16 tie a week ago in Pittsburgh and made some critical mistakes while growing their winless streak to 14 games. They are the league’s only winless team.

Detroit’s D’Andre Swift ran for a career-high 136 yards, breaking off a 57-yard TD run in the second half to keep the Lions close. Kicker Aldrick Rosas made a 43-yard field goal in the fourth quarter to pull the Lions within 13-10. However Detroit couldn’t come up with one more big play to put more pressure on the Browns.

The Lions played without starting quarterback Jared Goff, who injured his oblique against the Steelers. Tim Boyle finished 15 of 23 for 77 yards with two interceptions in his first NFL start.

Mayfield was limited in practice this week with shoulder, foot and knee injuries. He threw a first-half interception and had other issues in wet conditions before connecting with Chubb late in the second quarter.

Landry’s 16-yard scoring run came on a gadget formation to open the second quarter. The Browns were determined to get Landry more touches, and the sure-handed receiver moved behind center with Mayfield shifting right. Landry took the snap and rolled left looking to throw back to his right.

With nobody open, Landry tucked the ball and sprinted up the middle for his second rushing TD this season.

The Browns took a two-TD lead late in the half with help from the Lions, who committed three penalties — two by cornerback Amani Oruwariye — on a 76-yard scoring drive capped by Chubb’s TD.

The Lions had intended to use kicker Riley Patterson, signed earlier this week off New England’s practice squad. However, he was inactive and Rosas, a Pro Bowler in 2018 with the New York Giants, made his field goal and an extra point.

Earlier this week, Detroit released Ryan Santoso, who missed two kicks, including a potential winner against the Steelers. The Lions have been juggling kickers since training camp. Regular kicker Austin Siebert is on injured reserve with a hip issue.

Lions: Starting G Halapoulivaati Vaitai went out with a concussion in the second quarter. … Da’Shawn Hand (groin) got hurt in the third quarter. … Center Evan Brown left for several plays with an unspecified injury.

Browns: Landry appeared to aggravate the left knee injury that landed him on injured reserve. … LB Jeremiah Owusu-Koramoah went out in the second half with a leg injury that went unannounced by the team.

Browns: visit Baltimore on Sunday night for the first of two games in three weeks against the AFC North-leading Ravens.