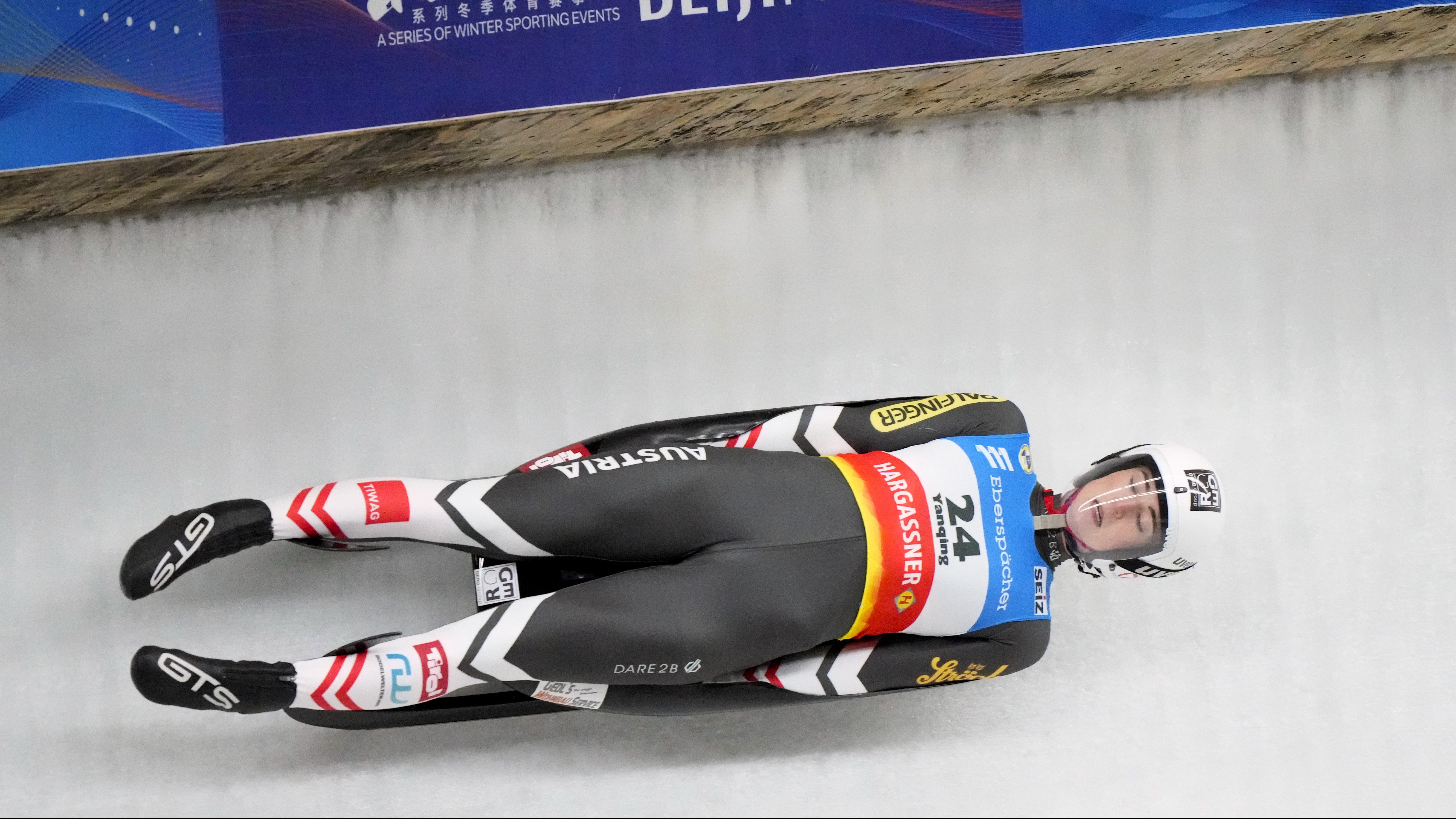 Madeleine Egle of Austria competes during the women's race at the Luge World Cup, a test event for the 2022 Winter Olympics, at the Yanqing National Sliding Center in Beijing, Sunday, Nov. 21, 2021. (AP Photo/Mark Schiefelbein)

USA Luge got its first medals of the World Cup season later Sunday, with the team of Ashley Farquharson, Tucker West and the doubles sled of Chris Mazdzer and Jayson Terdiman taking silver in the team relay behind Austria.

Egle was part of that relay gold as well, capping a huge day for her. She had the fastest time in both women’s heats and finished with an overall time of 1 minute, 58.822 seconds, getting her first victory in her 49th career start.

Julia Taubitz of Germany was second in 1:58.928 and Austria also grabbed bronze with Lisa Schulte finishing in 1:59.350.

Reigning Olympic and World Cup overall champion Natalie Geisenberger of Germany was 26th in a field of 28 women’s sliders. Geisenberger crashed in her first run, leading to the worst World Cup finish of her career. It was only the third time in her last 43 World Cup races that Geisenberger failed to medal.

For USA Luge, Farquharson led the way with an eighth-place showing in the women’s race. Summer Britcher was 14th and Emily Sweeney was 16th, while Brittney Arndt had trouble in her first run and elected not to compete in the second heat.

But the relay went far better for the Americans — aided in large part by contending teams like Germany and Russia having problems getting down the track.

Tatyana Ivanova of Russia crashed in her run, ending her country’s medal chances in the relay. And the final team in the relay was Germany — which had a lead of more than a full second, a massive margin in luge, but the doubles team of Toni Eggert and Sascha Benecken skidded and lost control just a few turns from the finish and the lead was gone in a flash.

USA Luge chooses its relay teams based on who has the fastest heats during the racing weekend, which means the doubles team of Dana Kellogg and Duncan Segger had earned the right to compete in the team event Sunday.

But Kellogg and Segger decided to give up their spot to Mazdzer and Terdiman, who didn’t qualify for the World Cup weekend in large part because Mazdzer has missed most of the preseason because of a broken foot — which still isn’t healed. Had Kellogg and Segger not done that, it would have meant Mazdzer and Terdiman wouldn’t have had a major competitive run on the track until the Olympics in February.

The teams arrived in China three weeks ago for training and the first World Cup, with this stay marking the first time that most of the world’s luge athletes got to see the track. The circuit moves to Sochi, Russia, for the next two weekends of World Cup racing.