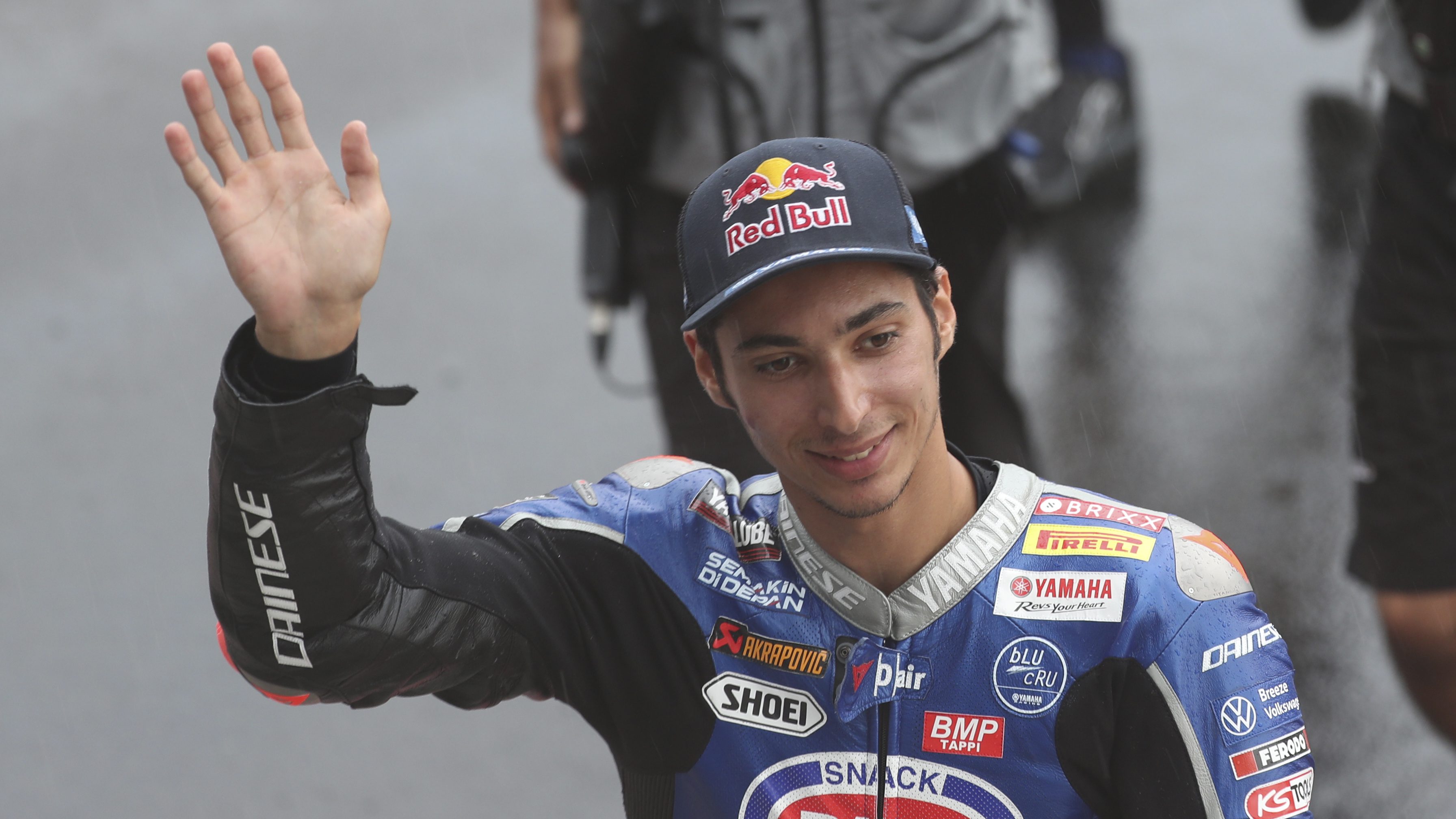 Team Pata Yamaha with Brixx rider Toprak Razgatlioglu of Turkey wave to spectator amid heavy rain prior to Race 2 of the Superbike World Championship at Mandalika International Circuit in Mandalika, Lombok Island, Indonesia, Sunday, Nov. 21, 2021. The final Superbike World Championship round on the Indonesian tourist island of Lombok drew tens thousands of fans on Sunday, the biggest crowd for any event in the country since the start of the coronavirus pandemic, as Toprak Razgatlioglu became the first-ever Turkish rider to win the championship.(AP Photo/Achmad Ibrahim)

MANDALIKA, Indonesia (AP) — The final Superbike World Championship round on the Indonesian tourist island of Lombok drew tens of thousands of fans on Sunday, the biggest crowd for any event in the country since the start of the coronavirus pandemic, as Toprak Razgatlioglu became the first-ever Turkish rider to win the title.

Razgatlioglu, a Yamaha rider, secured the WorldSBK championship after finishing second behind six-time world champion Jonathan Rea in race one at the beachside circuit. Race one and race two were both held Sunday after heavy thunderstorms on Saturday had forced race one to be rescheduled.

In the final race, Razgatlioglu held a comfortable lead of 30 points over the reigning champion Rea, a Kawasaki rider. His win makes him the first rider to beat Rea for the WorldSBK title since 2015.

The crowd at the newly built Pertamina Mandalika International Street Circuit surpassed 20,000 on the final day on Sunday and about 15,000 during a free practice session on Friday, said Cahyadi Wanda, the vice president director of the Mandalika Grand Prix Association.

The new 4.3-kilometer (2.6 miles) circuit, inaugurated by President Joko Widodo last week, has 17 corners and 40 garages and a 507-meter start-to-finish straight. The grandstand can accommodate up to 50,000 people and the total capacity is 200,000.

The world championship was Indonesia’s first big international motorbike race in more than two decades in what authorities said was being eyed as a launchpad for the revival of tourism in one of the country’s most popular destinations.

Only fully vaccinated spectators or those with negative COVID-19 tests were allowed into the circuit.

Indonesia was one of Asia’s hardest-hit countries by the pandemic. Its COVID-19 caseload, which peaked around 56,000 daily cases in July, has declined considerably, with around 500 cases a day in the past week.

MotoGP is one of Indonesia’s most-watched sports but it has been 24 years since the country hosted a MotoGP round in West Java’s Sentul city.

A much-awaited MotoGP race will be held in Mandalika next March as the second Grand Prix of the 2022 season.

Indonesia has been seeking inclusion in the race calendar but struggled to get a world-class circuit until Widodo’s administration in 2015 picked Mandalika on the picturesque Lombok island, next to Bali, to build a new racing track from scratch.

Like Bali, Lombok is known for its pristine beaches and mountains.

The sports cluster project, which measures 130 hectares and includes hotels and other facilities, is located in the Mandalika special economic zone. It is part of a $3 billion central government-backed economic development program, from which $1 billion was allocated to building the race track to support local tourism and accelerate development in the eastern part of the country.

Previously, there were doubts that the circuit could be completed in time for the WorldSBK Indonesian round as construction faced several obstacles, ranging from environmental issues and the coronavirus to reports of locals being dispossessed of their homes, land and livelihoods.

About 43 families in Bunut hamlet who refused to sell their land still live on a plot in the middle of the circuit, while 300 others have been relocated to another area far from the frenetic circuit or have moved back to their hometowns, said Rahmat Panye, the neighborhood head of Bunut hamlet.