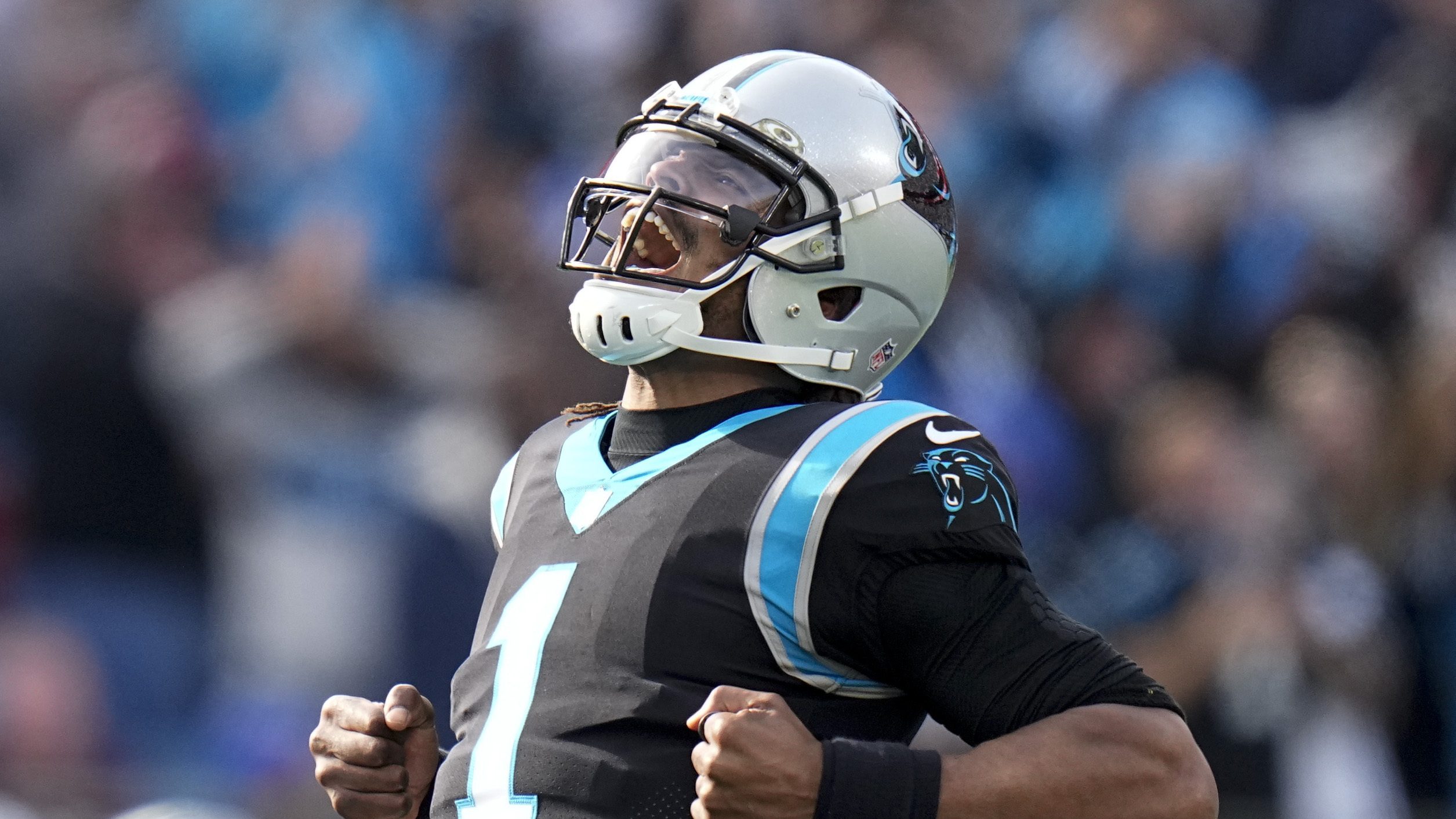 Carolina Panthers quarterback Cam Newton celebrates after scoring during the first half of an NFL football game against the Washington Football Team Sunday, Nov. 21, 2021, in Charlotte, N.C. (AP Photo/Rusty Jones)

It was on this day 13 years ago that Newton was arrested while at the University of Florida. He was charged with felony counts of burglary, larceny and obstructing justice after allegedly stealing another student’s laptop computer and later throwing it out of a dormitory window when officers arrived to investigate.

Newton would go on to complete a pretrial diversion program and struck a plea deal in which all of the charges were dropped — allowing his football career to continue.

“It’s a special day for me. I took a big ‘L’ in my life,” Newton said. “It was a big scar that ended up being my biggest star.”

So the 32-year-old quarterback wasn’t going to let one loss, a hard-fought 27-21 defeat to Washington on Sunday impact his outlook as he looks ahead to the remainder of the season.

“I am still going to enjoy this moment,” Newton said. “I think my life could be who knows where right now if the judge ruled (a different way). God has favor over my life and that’s the big picture. The realization of the things that you can control, I’m just enjoying the moment.”

The Panthers (5-6) are once again on the outside looking in at the NFC playoff picture after their fourth straight home loss, but Newton remains optimistic better times are ahead. He likes the weapons the Panthers have on offense in Christian McCaffrey, D.J. Moore and Robby Anderson. He likes the team’s defense, although it struggled to stop Washington quarterback Taylor Heinicke.

There were times the Panthers looked like an offense to be reckoned with.

And the fact that Newton completed 21 of 27 passes for 189 yards and two touchdowns and ran 10 times for 46 yards and another score is a positive sign for Carolina.

The big problem was the Panthers only converted 2 of 9 third downs and a pair of two-minute drives late in the fourth quarter came up short when Carolina turned over the ball on downs when it most needed a score.

It’s unfair to pin that on Newton, according to coach Matt Rhule.

Rhule said Newton is still learning the playbook after signing with the team just 10 days ago, and his knowledge of the two-minute offense heading into the game was limited. Still, replacing Newton with P.J. Walker would have been a stretch considering Walker hadn’t played all game and it was Newton who had energized the crowd throughout the day.

“We planned on playing P.J. going in but it seemed like Cam was in control,” Rhule said. “It seemed like he was moving the football. I think the coaches just decided, hey, he’s hot. … We thought Cam was playing well so we kept him in there.”

“Anytime he’s in the huddle the energy’s awesome,” McCaffrey said. “It’s good to have him back.”

Washington coach Ron Rivera said the Panthers are going to be tough to beat moving forward.

“The nice thing is we caught them before Cam really gets into the playbook,” Rivera said. “This is the time to play them. So we were fortunate. I know they’re going to get more efficient as they go along and he gets into that book.”

Carolina travels to Miami next Sunday before its bye week. The Panthers have a difficult closing schedule that includes two games against Tampa Bay and one each against New Orleans and Buffalo.

Newton is confident the Panthers can make a run once the offense is on the same page. In the meantime, he will take a page from the past — and be grateful for the opportunity that is ahead of him.

“I wanted to enjoy the moment today,” Newton said. “It didn’t turn out the way I wanted it to or we wanted it to, but yet we can learn from it. We have to realize that nobody is going to lay down. I didn’t expect that. I know a lot of other guys didn’t expect that, but it’s still going to come down to us executing the given plan.

“For me, I am excited what the future holds and it’s going to start with us tomorrow and going over the film and locking in and doing that as best as we could.”