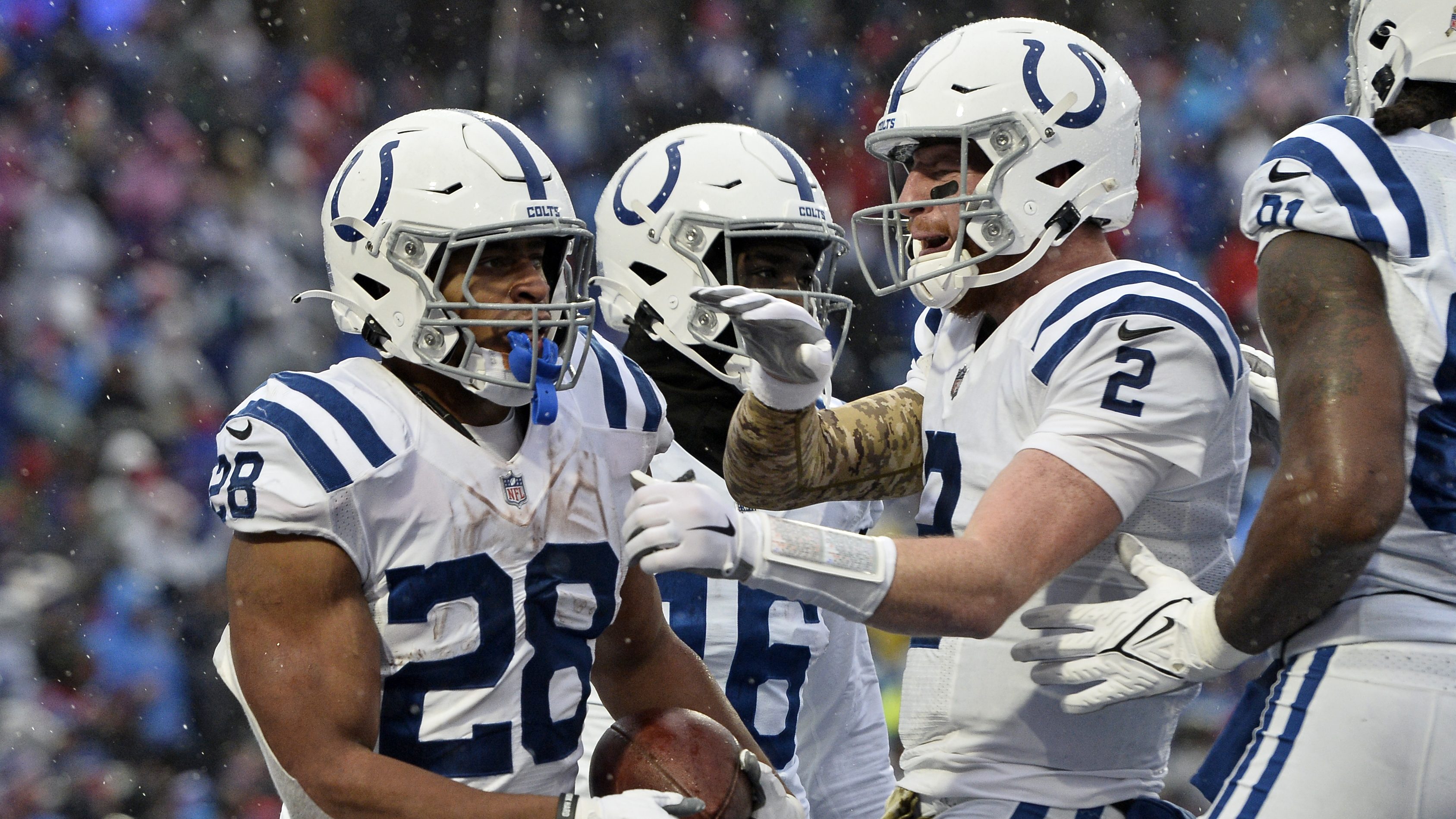 Indianapolis Colts running back Jonathan Taylor (28) celebrates with Carson Wentz (2) after scoring during the second half of an NFL football game against the Buffalo Bills in Orchard Park, N.Y., Sunday, Nov. 21, 2021. (AP Photo/Adrian Kraus)

ORCHARD PARK, N.Y. (AP) — Jonathan Taylor set a franchise record by scoring five times, and took over the NFL lead in both yards rushing and touchdowns, in the Indianapolis Colts’ 41-15 rout of the unraveling Buffalo Bills on Sunday.

Taylor scored three times in the first half, including a 23-yard catch, en route to becoming the NFL’s first player with five TDs in in one game since New Orleans’ Alvin Kamara had six TDs rushing in a 52-33 win over Minnesota last Christmas Day.

The Bills (6-4) ceded their lead atop the AFC East, falling a half-game behind — guess who? — New England, which Buffalo will play twice over the next five weeks.

Taylor finished with a season-high 185 yards rushing and four touchdowns and has 1,122 yards this season after beginning the day tied for the league lead with the injured Derrick Henry of Tennessee. Taylor has 14 touchdowns this season, moving ahead of Arizona’s James Conner, who began the day with 12.

Taylor topped 100 yards from scrimmage and scored a touchdown for the eighth consecutive game, matching the NFL’s longest run set by former Colts running back Lydell Mitchell, spanning the 1975-76 seasons, and LaDainian Tomlinson in 2006.

The Colts (6-5) continued their roll by improving to 5-1 in their past six games. Indianapolis had gone 0-5 against opponents who made the playoffs last year, including two losses to AFC South rival Tennessee.

The Bills have dropped three of five — including a 9-6 loss at Jacksonville two weeks ago — and haven’t won consecutive games since a 4-0 run ended with a 34-31 loss at Tennessee on Oct. 18.

The Colts had four takeaways and took advantage by scoring after two of them to build a 24-7 lead in the first half of a rematch of last season’s wild-card playoff game that Buffalo won 27-24.

Buffalo was flat from the beginning. After limiting opponents to two field goals in the first quarter through their first nine games, the Bills gave up two touchdowns to Taylor in the first 13:22.

The bottom then fell out for Buffalo in the second quarter after Michael Badgley capped a 15-play, 58-yard drive with a 36-yard field goal to put the Colts up 17-7 with 2:12 left in the second quarter. McKenzie fielded the ensuing kickoff and lost the ball untouched while stumbling to the turf at Buffalo’s 13.

T.J. Carrie scooped up the fumble and returned it to Buffalo’s 2. Taylor scored on the next play by diving over a pile.

Allen finished 21 of 35 for 200 yards with two touchdowns, both to Stefon Diggs, and two interceptions.

Allen’s record dropped to 17-17, including 0-2 in the postseason, in games when he has committed a turnover. … The Colts extended their run of games with a takeaway to 12, which began the week tied with the New York Giants for the NFL’s longest active streak. … With Bills backup Mitchell Trubisky also throwing an interception, Indianapolis improved its turnover differential to plus-15 and took over the NFL lead from Buffalo, which failed to force a takeaway and had its differential drop to plus-10. … Badgley also hit a 35-yard field-goal attempt. … Bills K Tyler Bass missed both field-goal attempts. He hit the right upright from 57 yards to close the first half and was wide left on a 49-yard attempt.

Colts: LB Darius Leonard played after being listed as questionable due to hand and ankle injuries.