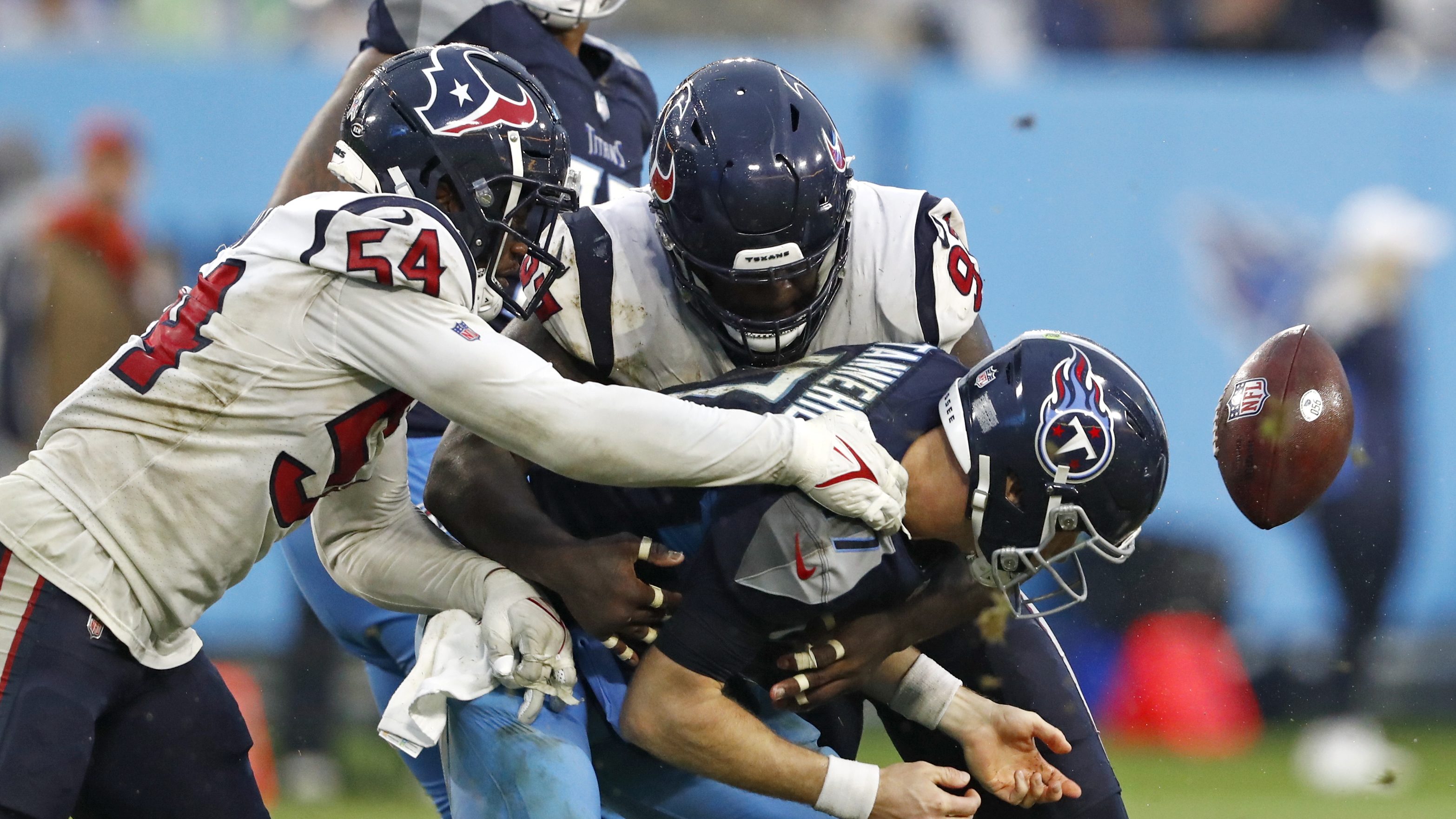 Tennessee Titans quarterback Ryan Tannehill (17) fumbles the ball as he is hit by Houston Texans defensive end Jacob Martin (54) in the second half of an NFL football game Sunday, Nov. 21, 2021, in Nashville, Tenn. (AP Photo/Wade Payne)

NASHVILLE, Tenn. (AP) — The end of the Tennessee Titans’ six-game winning streak comes down to a simple number: Five.

Ryan Tannehill was intercepted a career-high four times, and the Titans lost the ball on a muffed punt for a season-high five turnovers Sunday in a 22-13 loss to the Houston Texans that snapped the longest active winning streak in the NFL.

“You turn the ball over in this league, you’re going to lose,” Titans coach Mike Vrabel said. “Nobody wants to hear that, nobody believes that. But when you do that, it doesn’t matter what the record is. We had five turnovers. They had zero. You’re going to lose the game 99 percent of the time.”

The Titans (8-3) also had other issues Sunday. They fell behind 19-0, leading them to go for it on fourth down four times. They turned it over on downs twice and cost a chance at another fourth-and-1 opportunity after a false start by left guard Rodger Saffold.

Those mistakes were more than enough even when the Titans outgained Houston 420-190 and held the ball for nearly a minute longer.

“Our offense certainly was its own worst enemy,” Vrabel said.

Tannehill now has almost as many interceptions this season (12) as he does touchdowns (13). He threw for 323 yards and a TD, his second 300-yard passing performance this season. Tannehill missed a second TD when Dontrell Hilliard fumbled after a catch into the end zone where Anthony Firkser recovered.

“We shot ourselves in the foot all day,” Tannehill said. “And we got to get better, and it starts with me.”

It didn’t help that the Titans have used the most players this season with 82 coming into this game. Seven-time Pro Bowl receiver Julio Jones is on injured reserve, and 2020 Pro Bowler A.J. Brown went to the locker room with a chest injury after a 9-yard catch late in the third quarter.

That left Tannehill and the Titans with three available receivers, including rookie Dez Fitzpatrick who didn’t make the team in the final roster cut out of training camp. Fitzpatrick did catch his first NFL TD pass, an 18-yarder, in the third quarter. He also was the target on an interception at the goal line in the fourth quarter.

Tannehill refused to go into details on whether miscommunication was an issue.

“At the end of the day, it all falls squarely upon me and I have to be better,” Tannehill said.

Left tackle Taylor Lewan said the reality is the Texans (2-8) took advantage of the Titans’ poor play and that they must be better. His confidence in Tannehill also hasn’t wavered.

With the loss and a win by Indianapolis over Buffalo, the Titans’ margin inside the AFC South is down to a two-game lead in the loss column plus the tiebreaker over the Colts (6-5). They still sit atop the AFC as the first and currently only team in the conference with eight wins, though their bye comes Dec. 2.

“We’re just not going to panic,” safety Kevin Byard said. “It is what it is. We took a loss and rally the troops, get healthy and prepare for the Patriots next week.”