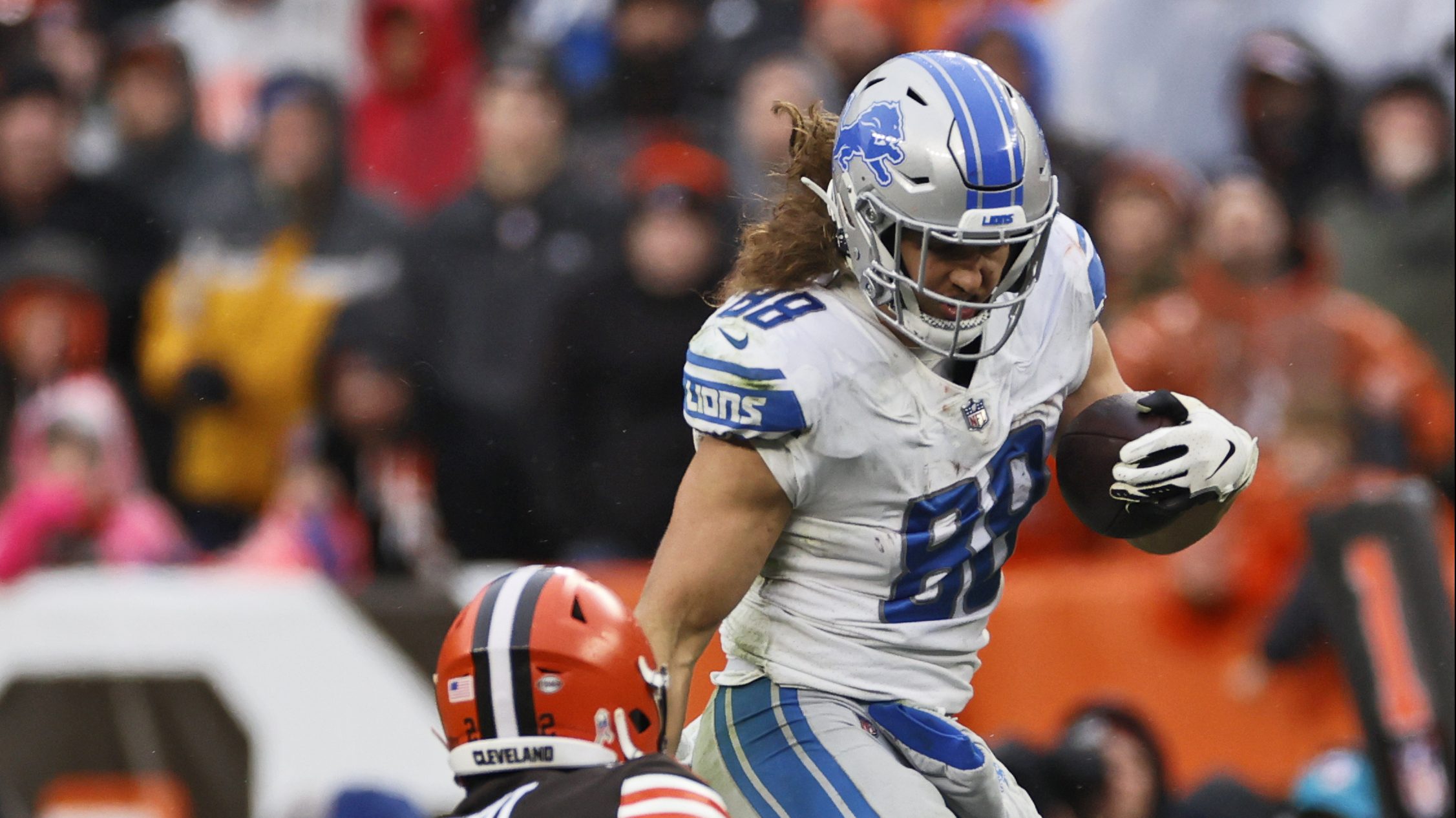 Detroit Lions tight end T.J. Hockenson (88) leaps in the air during the second half of an NFL football game against the Cleveland Browns, Sunday, Nov. 21, 2021, in Cleveland. The Browns won 13-10. (AP Photo/Ron Schwane)

With his team at 0-9-1 and seven games left, the Detroit Lions coach would happily take a win on any day at any NFL stadium.

Beating the Chicago Bears on Thursday, though, would be even better.

“When we get a win, it is going to be freaking outstanding, but yes, getting it on Thanksgiving in Detroit would make it that much more special,” said Campbell, who played on the holiday for both the Lions and Dallas Cowboys.

“We’re in the world of social media, where everyone has access to everything, but this is still huge. When I was growing up in Texas, we always watched the Lions and then we watched the Cowboys, and that’s what everyone does.”

It helps that, for one of the first times this year, the Lions seem to have a serious shot at victory. After going into their Week 9 bye giving up an average of 30.5 points per game, Detroit held the Steelers to 16 in a Nov. 14 tie, then allowed 13 in a three-point loss in Cleveland on Sunday.

A big part of that improvement has come from forcing five turnovers in Pittsburgh and Cleveland. They had only gotten seven takeaways in their first eight games.

“That’s big, because to play good defense, you have to get turnovers,” Campbell said. (Defensive coordinator Aaron Glenn) is a hell of a teacher, a hell of a coach and a hell of a motivator. As young as we are, teaching is a big part of our job, and he’s really done a great job of developing our defensive talent.”

The Lions have also discovered a running game, picking up 397 yards in the last two games after struggling to get anything going in the first eight weeks.

D’Andre Swift went over 130 yards against Pittsburgh and Cleveland, much to the delight of one of his key blockers.

“He’s doing a fantastic job,” fullback Jason Cabinda said. “There’s not a whole lot more we can ask from that guy in terms of what he’s doing for this team.”

Despite limited help from the pass rush – the Lions only have one sack in three games – the secondary held Mason Rudolph (4.8 yards per pass) and Baker Mayfield (6.1) to a combined 5.3 yards per passing attempt. Add in three interceptions, and one of the league’s worst pass defenses is finally showing some life.

With Chicago QB Justin Fields dealing with rib injuries, that could be a key to victory on Thursday.

Goff (oblique) was able to throw Monday under simulated game conditions, so could be back against Chicago.

For the first time in his four-year career, Cabinda is being used as an offensive threat. The 25-year-old started his career as a linebacker for the Raiders in 2018, then spent 2019 as one of Detroit’s best special teams players.

Last season, he was converted to fullback, but only to block – he carried once for no gain while playing every week.

He got his second career carry against the Steelers, gaining 2 yards, then delighted his teammates with a 21-yard run on Detroit’s second drive against the Browns.

“It was huge for me to be able to break free there and pick up some yardage,” he said. “I’ve been working hard on carrying the ball, but it was a boost to see it translate into the game.”

Lions wide receivers didn’t get a lot of help from Boyle, but they only caught five passes for 30 yards against Cleveland. Detroit hasn’t gotten a touchdown reception from a wide receiver since Kalif Raymond caught two against the Bears in a 24-14 loss on Oct. 4.

Goff is the one significant question mark going into Thanksgiving.

77 — Detroit’s net passing yardage in each of the last two games. Goff threw for 114 against the Steelers, but was sacked four times, while Boyle had 77 with no sacks against Cleveland.

Find a way to win a football game.