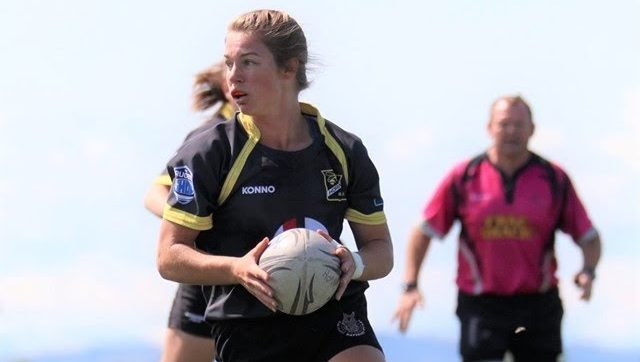 VICTORIA, British Columbia — Larah Wright discovered her passion for rugby in grade 10 at Lord Beaverbrook High School in her native Calgary. Having realized she is almost naturally gifted for this sport has driven her further and further.

In her first complete season at the college level, Wright led Victoria Vikes in tries (3) and points (15) and helped them to secure a spot in the 2021 U SPORTS women’s rugby championship played in Ontario. The fourth-place finish marked the Vikes’ best result at the U SPORTS National Championship in program history. Before, the Vikes had a shot at the Canada West trophy but were defeated by the University of British Columbia, 47-13, in the gold medal match at McMahon Stadium, Oct. 31.

Wright was named Canada West Rookie of the Year, made the All-Star team and received the All-Canadian status. At the 2021 U SPORTS awards banquet, Wright told the University of Victoria’s press team that being named the ROY was “surreal” and surprising.

Coach Waters said to BVM Sports that Wright was outstanding this season and made a huge contribution to the Vikes’ success.

“She is very deserving of this recognition,” Waters said. “She has demonstrated skills, evasion and decision-making beyond her years. She has been one of the most consistent performers on the team and one of its leading scorers.”

“Larah is a very hard worker, coachable and always brings positive energy to her team,” Waters said. “Her off-field presence is just as amazing as her on-field performance. The future is very bright for Larah and I’m looking forward to seeing what comes next for her.”

Wright’s successful journey goes beyond her achievements in college sports.  In July, she was invited to Canada’s women’s rugby team Western Camp that took place in Victoria, British Columbia. She was one of the 36 Western-based athletes joining the training sessions.

Wright is on the radar of the Rugby Canada Development Academy that is assembling the 7s squad that aims to compete in the 2024 Olympics.

Until very recently, Wright was a multi-athlete. In addition to rugby, she played volleyball, lacrosse and was even a runner.

“There was a game that we played one afternoon and she showed up after running a half marathon,” Calgary Hornets rugby football club president and former Wright’s coach Catherine Laing said to BMV Sports.

Wright entered the Calgary Hornets U17 program in 2018 and had her first experience ever with a club.

“She shocked me as a player who has only been playing rugby for a few years. Her athleticism was beyond anything expected from a new player,” Laing added. “Larah is incredible athletic: was our primary kicker, and played (outside) centre for us, which is a very physical role, that implies a lot of running but also demands to dominate physically on the field. She was impressive in her defensive tackling but also offensively.”

“I got to meet her in Grade 11,” McGregor said. “She was impressive pretty much from the get-go.”

Besides her athleticism, McGregor praised Wright’s work ethic as well as her commitment to getting better every single day, regardless of whether it is a training session or a game.

“She has a good attitude and plays extremely hard,” she said.

Just as Laing did, McGregor helped Larah to understand and read the game better. That way she could get the most of her great speed and strength to improve her overall impact on her team.

“It’s a complete change going from playing high school to university rugby,” McGregor said to BVM Sports. “You could tell immediately that she has put a ton of work in things like passing, kicking, catching, running or reading the opponent’s defense to find gaps. She is a dominant player and you can always count on her to make the breaker, a big tackle or a big pass. It was incredible to see the difference from when I last saw her play in Grade 12. She has matured and grown a lot.”