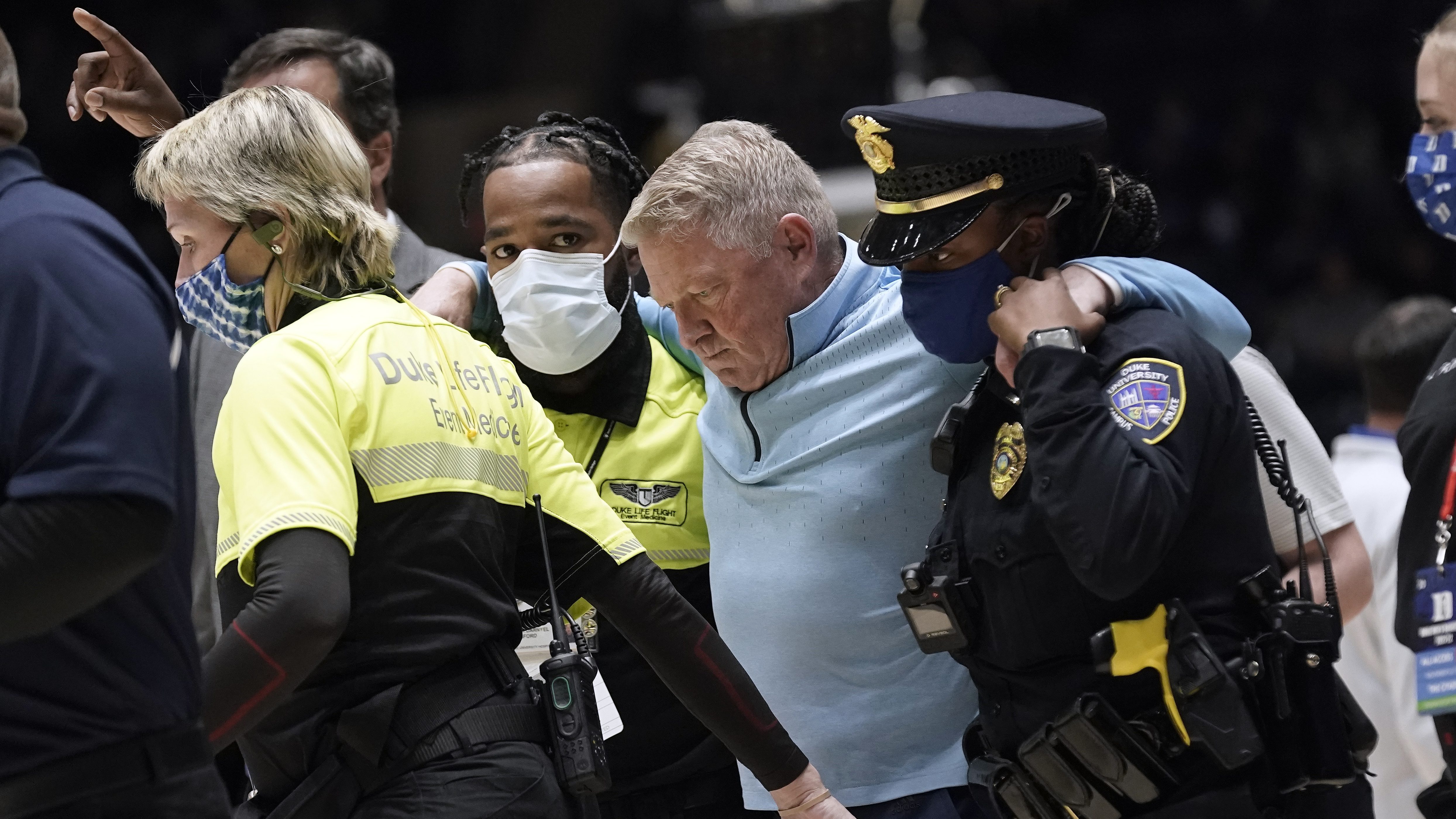 Citadel head coach Duggar Baucom is helped off the court after collapsing on the sideline during the first half of an NCAA college basketball game against Duke in Durham, N.C., Monday, Nov. 22, 2021. (AP Photo/Gerry Broome)

DURHAM, N.C. (AP) — No. 5 Duke beat The Citadel 107-81 Monday night after Bulldogs coach Duggar Baucom collapsed on the court early in the first half and was taken to a hospital.

Baucom fell along the sideline barely a minute into the game and was taken to Duke University Hospital. The 61-year-old Baucom was conscious as he was helped out of the gym.

The Citadel’s Hayden Brown scored off an offensive rebound just before play was stopped for Baucom, who is in his seventh season at the school. Associate head coach Jack Castleberry took over on The Citadel’s bench.

Freshman forward Paolo Banchero scored a career-high 28 points and Wendell Moore Jr. had 22 for Duke (6-0), which completed a five-game homestand with five double-digit victories. It was the Blue Devils’ last tuneup before Friday night’s clash with top-ranked Gonzaga.

Mark Williams added 14 points, Trevor Keels had 11 and Jeremy Roach had 10 for the Blue Devils.

The Citadel made 18 baskets from 3-point range. Brown and Brent Davis both scored 19 points and Stephen Clark had 16 points.

The Blue Devils opened the second half on a 15-6 surge to extend what had been a 52-42 halftime lead.

Duke finished with a 46-29 rebounding edge, with Banchero and Moore each pulling in eight.

The Citadel: Duke kept its previous four opponents to less than 60 points, a mark The Citadel reached with 10:16 remaining. But the Bulldogs, who opened the season by winning at Pittsburgh, weren’t able to defeat another Atlantic Coast Conference opponent.

Duke: The Blue Devils have had plenty of chances to work out their kinks the past couple of weeks. They won’t play at home again for another three weeks. They gave up a season-high number of 3-point baskets, but also posted a season-high point total.

Duke: vs. No. 1 Gonzaga on Friday night in Las Vegas.